The board-certified trucking lawyers at Baum Hedlund Aristei & Goldman are all too familiar with the devastation associated with semi-truck accidents. In addition to our successes in the courtroom, the firm is dedicated to reducing the number of trucking crashes. Several of our trucking lawyers have testified before state and federal government safety committees to improve truck safety and other modes of commercial ground transportation.

Through litigation and advocacy, we make every effort to shine a light on the darker side of the trucking industry. We hope that our efforts will raise awareness and influence public policy on important truck safety issues, such as keeping heavier trucks off of our nation’s highways, implementing collision avoidance systems, and barring truckers from being behind the wheel for more hours per day than is safe.

Commercial trucks require more knowledge, training, skill, and care to operate safely than do passenger vehicles. Big rigs are heavier, longer, more difficult to slow and stop, and harder to maneuver. As such, a truck driver is required to obtain a special Commercial Driver’s License (CDL) to drive a commercial motor vehicle (CMV).

Trucking companies (motor carriers) are also governed by specific rules and regulations when it comes to employing commercial truck drivers. The carriers set the tone for truck safety: if an operation cuts corners, hires unsafe or unqualified drivers, and looks the other way to avoid violations, the truck drivers in their employ are more likely to follow suit when it comes to safety.

If you or a family member was involved in a semi-truck accident, it is in your best interest to speak with an experienced truck accident lawyer about your claim. Our trucking accident litigation team consists of seasoned trial lawyers who have been in practice for decades and have argued hundreds of cases before juries. We know what it takes to win truck accident cases, and we won’t stop fighting until we have secured the maximum allowable compensation for you and your family.

To speak with an experienced trucking attorney today, contact us or call toll-free at (855) 948-5098 for a free case evaluation.

Justice often goes beyond a successful resolution of a truck accident claim. Our semi-truck lawyers work to improve truck safety and prevent crashes similar to those our clients and their families were forced to endure.

For decades, our firm has spearheaded and participated in campaigns that led to safety improvements, including several involving commercial transportation.

One of our trucking attorneys testified at a special California State Senate Transportation Committee Hearing that probed the events leading up to a fatal accident that killed our clients’ son. Our firm informed the committee that Caltrans had granted a permit to a trucking company to carry a load 15 feet high on a freeway with an overpass only 14 feet, 10 inches high. When the truck traveled under the overpass its large tank was ripped from the truck by the overpass and crushed the car traveling behind the truck.

In the past 10 years, more than 48,000 people needlessly died and over 1 million were injured in 18 wheeler crashes.

In fatal crashes involving a passenger vehicle and a large truck, 98% of the deaths are occupants of the passenger vehicles. Adding even more weight to a big truck dramatically increases the risk of death and serious trucking accident injuries.

In the Large Truck Crash Causation Study conducted by the U.S. Department of Transportation (DOT), the following were among the top factors in large truck crashes:

If you or a loved one have been the victim of a truck accident, contact Baum Hedlund today for a free consultation.

The Truck Safety Coalition is a partnership of Citizens for Reliable and Safe Highways (CRASH), and Parents Against Tired Truckers (P.A.T.T.) Non-profit truck safety organizations such as The Truck Safety Coalition and Public Citizen, keep a very close watch on state and federal regulations affecting the trucking industry. These truck safety groups are very proactive in supporting good law, promoting truck safety, and fighting bad laws which make our roads and highways more dangerous.

Some of our truck accident clients choose to get involved with the Truck Safety Coalition’s Survivors Network.

The Truck Safety Coalition is dedicated to reducing the number of deaths and injuries caused by truck-related crashes. This volunteer network is made up of dedicated truck safety advocates.

They come from different backgrounds and interests, but all share three common goals:

CRASH (Citizens for Reliable and Safe Highways) was formed in 1990 to help mitigate the devastating problem of truck crashes. CRASH is a nationwide, grassroots non-profit organization dedicated to improving overall truck safety in the U.S. and eliminating the unnecessary deaths and injuries caused by truck crashes every year. They represent the millions of Americans who travel the nation’s highways every day, including truck drivers, motorists, crash survivors and families of truck crash victims. CRASH works at all levels of government to initiate and promote truck safety legislation around the issues of truck size and weight, truck driver fatigue, and vehicle maintenance. Their goal is to make safety as important as productivity in all U.S. trucking operations.

P.A.T.T. (Parents Against Tired Truckers) was formed when a truck driver fell asleep at the wheel of his 80,000 pound rig, killing four innocent teenagers. There were no criminal charges (not even a traffic ticket) brought against this truck driver or the trucking company for their deaths. Thus, P.A.T.T. was formed in May of 1994. They have grown from a Maine grassroots group to a nationally recognized organization. They have been successful in bringing the fatigue issue to the forefront at national events though out the United States. Although misunderstood by some, P.A.T.T. is not anti-trucker. In fact, many truck drivers are applauding them for addressing issues that they themselves cannot for fear of losing their jobs.

Stop Bigger Trucks is sponsored by the Truck Safety Coalition. Sign the petition to keep bigger, longer, heavier, deadlier trucks off the roads. 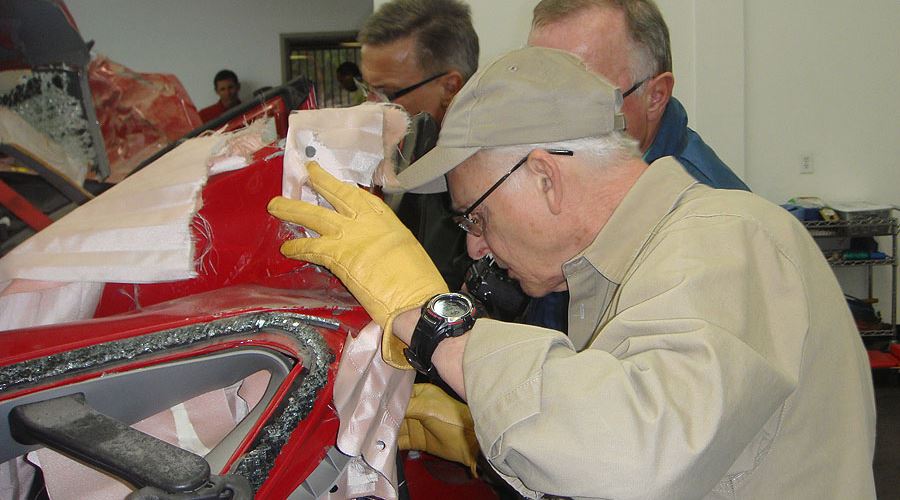 Serious Action Must Be Taken Against Truck Driver Fatigue

In the most comprehensive over-the-road study ever conducted of commercial driver alertness, the Federal Motor Carrier Safety Administration (FMCSA) found that:

The study recognized the need for more CMV / truck driver public rest areas, pointing to a significant shortage of rest area parking for commercial vehicles and drivers. There have been some efforts to expand spaces at truck stops to meet this need. Partly in response to the study, about half of the country now permits CMV truck weigh stations not in use to remain open as rest areas.

A group also examined the prevalence of truck driver fatigue as a principal factor in local/short haul (LSH) versus over-the-road semi-truck crashes. Not surprisingly, trip distance was found to have the greatest effect on the percentage of fatigue-related fatal crashes.

Speeding is a Blatant Disregard for the Safety of Others

Trucking crashes can be caused by weather conditions, poorly designed roads, or other factors outside of the driver’s control. However, when a catastrophic or fatal truck accident is caused by a speeding truck driver, there is added outrage due to the very preventable nature of these accidents.

Where a big rig driver is already carrying a hazardous amount of weight and traveling at highway speeds, speeding is a blatant disregard for the safety of other drivers and their passengers on the road. Unfortunately, as companies demand on-time delivery without factoring in unforeseen delays, the pressure for truckers to speed continues to mount.

Distracted Drivers are a Threat to Truck Safety

Accidents happen. There is a difference, however, between trucking accidents that were unavoidable and accidents that were the result of negligence. Through our years of experience litigating truck accident claims, we have recognized an increasing trend: Too many innocent people are suffering catastrophic injuries or losing their lives because of the negligence of distracted truck drivers.

In investigating truck accidents across the country, we have learned that the truck industry’s emphasis on timing and profits has shifted to the truck drivers — forcing them to “multitask,” drive recklessly and put lives at risk. To meet their ever tightening deadlines, many truckers drive for longer periods of time than regulations allow, take medication to stay awake, and attempt to perform their daily tasks, like eating or talking and texting on the phone, while driving.

These driver distractions can lead truckers to engage in habits like speeding, tailgating, making unsafe lane changes, driving in the wrong lane and otherwise driving recklessly.

Believe it or not, U.S. legislators in 2005 approved a new law called the Trucker Hours-of-Service Rule, which we feel creates a more dangerous environment as it increases the amount of hours a trucker can drive without a break and the overall hours they can drive weekly.

According to the Federal Motor Carrier Safety Administration:

Missing from the new rule is a much needed requirement to monitor actual truck driving hours by electronic onboard recorders which would allow for effective enforcement of the rule.

The National Safety Council (NSC), chartered by an act of Congress, is a non-governmental, not-for-profit, public service organization devoted solely to educating and influencing society to adopt safety, health, and environmental policies, practices, and procedures that prevent and mitigate human suffering and economic losses arising from preventable causes.

Public Citizen is a national, nonprofit consumer advocacy organization founded in 1971 to represent consumer interests in Congress, the executive branch and the courts. Public Citizen’s Auto Safety Group works to improve highway safety by lobbying Congress to pass critical legislation, monitors the Department of Transportation to be sure it carries out the will of Congress, conducts public awareness campaigns on critical issues, and participates in lawsuits to force government action when necessary.

The Department of Transportation (DOT) was established by an act of Congress on October 15, 1966. The DOT’s purpose is to “serve the United States by ensuring a fast, safe, efficient, accessible and convenient transportation system that meets our vital national interests and enhances the quality of life of the American people, today and into the future.”

The Federal Highway Administration (FHWA) is a major agency of the U.S. Department of Transportation (DOT). The FHWA is charged with the broad responsibility of ensuring that America’s roads and highways continue to be the safest and most technologically up-to-date.