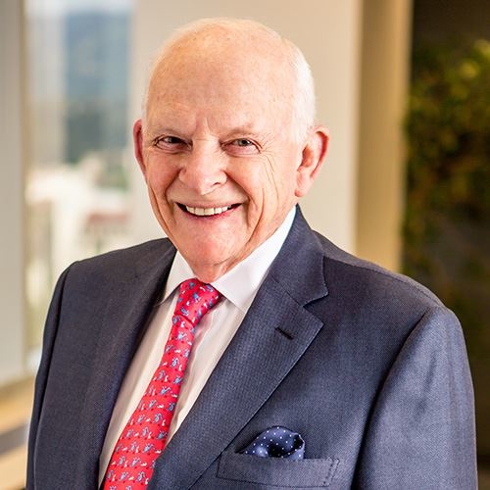 Ronald L. M. Goldman is a veteran trial lawyer, board-certified by the National Board of Trial Advocacy as a Civil Trial Advocate and Civil Pretrial Practice Advocate. He is a senior shareholder and the senior trial attorney for Baum Hedlund Aristei & Goldman. Since becoming a lawyer more than 50 years ago, Ron has handled a wide variety of sophisticated litigation at both the trial and appellate levels, and he has litigated hundreds of cases involving personal injury and wrongful death related to commercial transportation liability and to drug product liability.

Ron Goldman had the well-deserved reputation of being an unusually bright, articulate, demanding, caring, and knowledgeable law professor who wanted his students to stretch beyond their comfort level and excel far past the norm. In visiting with alums of Pepperdine University School of Law about their legal education experience, many mention Ron Goldman as having made a lasting impression on them, whether in his Aviation Accident Law class or the Torts class he taught earlier. Mr. Goldman is a scholar/practitioner who is both well-informed and well-prepared to serve the interests of his clients.”

He is a pilot and the head of the firm’s aviation disaster litigation team. Ron taught for 21 years at Pepperdine School of Law as an adjunct Law Professor, where he created and taught the course on Aviation Accident Law. He also taught courses in Torts, Insurance Law, Legal Writing, and Analysis.

In 1969 Ron handled his first aviation case and has continued handling aviation cases ever since, in accidents such as the 1972 British European Airways crash near London; the 1978 Pacific Southwest Airlines Flight 182/Cessna 172 Midair Collision at San Diego, California; the 1986 Aero Mexico Flight 498/Piper Midair Collision at Cerritos, California; and the 2000 Southwest Airlines runway accident at Burbank, California. He also handled the September 11, 2001 aviation (passenger) tort litigation in which he also served on the Plaintiffs’ Executive Committee.  Since joining the firm in 2003 he has worked on all of the firm’s general aviation and airline disaster cases.

He was the lead negotiator in one of the firm’s most significant aviation litigation achievements. He won, as part of the settlement in the January 8, 2003, Air Midwest Flight 5481 crash in Charlotte, NC, the agreement of the airline and maintenance company, in an organized ceremony, to deliver an unprecedented official public apology to the families for the crash. Three years later Ron appeared in a dramatic reenactment of the crash, its subsequent investigation, and the ultimate public apology, which aired on National Geographic Television.

Ron’s expertise extends far beyond aviation into many forms of commercial transportation accidents. Due to his experience with train accident cases, he was chosen as a member of the Plaintiffs’ Steering Committee for the 2008 Chatsworth Metrolink train collision in California, which is the deadliest train accident in Metrolink’s history. He also litigated the fatal 2012 Coal Train Derailment in Ellicott City, Maryland.

Ron was involved in ground-breaking pharmaceutical litigation which helped pave the way for the drug product liability litigation lawyers are facing today. In the 1960s he was actively involved in exposing Richardson-Merrell’s (later known as Marion Merrell Dow) cholesterol-lowering drug, MER/29 (triparanol), which was blamed for severe side effects and birth defects. The company was ultimately indicted for supplying the FDA with falsified information about the drug.

He is an AV® Preeminent™ Peer Review Rated lawyer through Martindale Hubbell and is listed in the Bar Register of Preeminent Lawyers, Who’s Who in America, Multi-Million Dollar Advocates Forum, and The Best Lawyers in America® 2013-2021 (Copyright by Woodward/White, Inc., of Aiken, SC). He is also published in Million Dollar Verdicts by the Masters and has been selected for inclusion in the 2005-2020 Southern California Super Lawyers®. As lead trial counsel, Ron won one of the largest verdicts of its type in Ohio’s history in December of 2006. The case concerned an unmarried person who died in a Tyson Foods truck crash. The case, Brumfield v. Tyson Foods, Inc., N.D. Ohio Case No. 1:05CV847, before Judge Donald C. Nugent, resulted in a jury verdict of $7,028,687.

Ron Goldman has appeared in the media more than 2,000 times concerning aviation accidents and pharmaceutical drug product liability, including safety oversight issues. Numerous media have sought Ron’s expert opinion as a pilot and former adjunct aviation accident law professor concerning airline accidents in the U.S. and abroad as well as regarding runway incursions at LAX.

Ron received his B.S.L. in 1960 and his law degree in 1962, both from the University of Southern California.