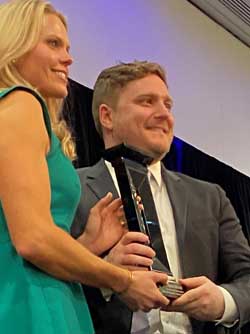 “I am very honored to be recognized with this award, especially considering the outstanding legal work among plaintiff attorneys throughout the country last year,” Mr. Wisner said.

In addition to his Trial Lawyer of the Year award, Mr. Wisner was also named one of America’s 50 Most Influential Trial Lawyers by Trial Lawyer Magazine and The National Law Journal for the second consecutive year.

In 2019, Brent and his co-lead trial counsel Michael Miller of the Miller Firm and their colleagues won a $2.055 billion jury verdict on behalf of Alva and Alberta Pilliod, a California couple who filed suit against Monsanto Co. (now Bayer) alleging exposure to the company’s Roundup weed killer caused them to develop cancer (non-Hodgkin lymphoma). Brent delivered the opening and closing arguments at trial, presented most of the scientific evidence and cross-examined many of Monsanto’s experts.

The Pilliod verdict was the second-largest personal injury jury verdict of 2019, and the ninth-largest in U.S. history.

“We finally had a chance to show the jury evidence that Monsanto has engaged in corporate malfeasance for the last 45 years,” said Wisner after the trial. “I think the jury’s punitive damage award speaks volumes about what the evidence shows. A lot of people talk about how Monsanto–the EPA says it is safe or whatnot, but the simple fact is when you look at the evidence, it is overwhelming and juries are resoundingly saying ‘Stop it.’”

The Pilliod case came on the heels of another Monsanto Roundup case. Hardeman v. Monsanto Co. culminated in an $80 million jury verdict the day before Mr. Wisner delivered his opening statement in Pilliod.

Brent was a vital member of the Hardeman trial team, presenting one of the key fact witnesses for the plaintiff, Dr. Christopher Portier, and cross-examining many of the corporate witnesses. In July of 2019, U.S. District Court Judge Vince Chhabria reduced the verdict in Hardeman to $25.2 million. The case is on appeal.

Mr. Wisner is the only attorney in the country to serve as co-lead trial counsel in two of the first three Monsanto Roundup trials. In total, the first three Roundup cases resulted in verdicts worth a combined $2.424 billion.

In addition to receiving the award for the 2019 Civil Plaintiff Trial Lawyer of the Year and being recognized as one of America’s 50 Most Influential Trial Lawyers, Brent received the following awards for his work in the Roundup cancer and other mass tort litigation:

R. Brent Wisner is one of the lead trial lawyers at Baum Hedlund Aristei & Goldman, where he manages a highly trained team on all aspects of litigation. Brent concentrates his practice on mass torts, class action litigation, and consumer fraud litigation. He also oversees the firm’s Medicare Secondary Payer cases, representing Medicare providers who have lost taxpayer funds to pharmaceutical companies and other large defendants.

In addition to his work last year in the Roundup litigation, Brent and his colleagues also filed lawsuits against the manufacturers of Zantac (ranitidine) on behalf of individuals who allege the drug leads to the formation of a cancer-causing chemical far above the U.S. FDA’s legally allowable daily limit.

“In my experience representing cancer victims against a corporate giant like Monsanto (Bayer), I can say with 100% certainty that if these drug companies had warned my clients, if they were given the choice to avoid a dangerous product that could cause them to develop cancer, they never would never have taken Zantac,” Wisner says.