R. Brent Wisner, attorney and vice president at the law firm of Baum Hedlund Aristei & Goldman has been selected to the Daily Journal’s Top 40 Under 40 for 2019.

In a report published in its August issue, the Daily Journal recognized Brent for his groundbreaking work in the Monsanto Roundup litigation. Brent served on the trial teams for all three of the first Roundup cancer lawsuits to proceed to trial. In two of the cases, he served as co-lead trial counsel, delivering the opening and closing arguments and cross-examining many of Monsanto’s experts.

The juries in the first three trials found that exposure to Monsanto’s Roundup weed killer caused the plaintiffs to develop non-Hodgkin lymphoma and awarded more than $2.424 billion in total damages. The most recent case, Pilliod et al. v. Monsanto Company, resulted in the largest personal injury jury verdict in the United States so far this year.

While the damages in all three cases were later reduced, the verdicts sent a strong message to the boardroom at Bayer, which completed its acquisition of Monsanto in 2018. 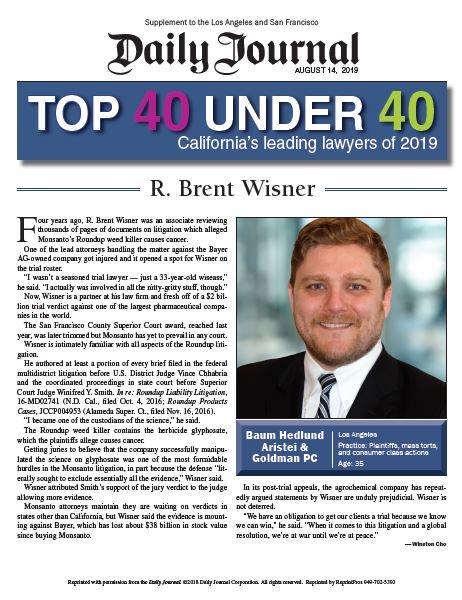 Read the Top 40 Under 40 article about Brent Wisner here.

Johnson v. Monsanto Co. was the first Roundup lawsuit to proceed to trial. Brent Wisner was co-lead trial counsel for Mr. Johnson. At trial, he delivered the opening and closing statements, presented most of the scientific evidence, and cross-examined many of Monsanto’s experts.

The punitive damages were later reduced to $39.25 million, bringing the total damages award to $78.5 million. The case is currently on appeal.

Edwin Hardeman v. Monsanto Co. was the second Roundup cancer trial and the first federal lawsuit to proceed to trial before U.S. District Judge Vince Chhabria. (Johnson v. Monsanto Co. was a California State Court case). The trial was the first bellwether case for more than 1,600 other plaintiffs with lawsuits consolidated in the federal Monsanto Roundup multidistrict litigation (MDL).

Brent worked with the trial team in this case. He presented one of the key fact witnesses for the plaintiff, Dr. Christopher Portier, and cross-examined many of the corporate witnesses in Edwin Hardeman v. Monsanto Co.

On March 27, 2019, the jury awarded Mr. Hardeman $80 million, finding that exposure to Roundup was a substantial factor in causing his non-Hodgkin lymphoma. In July, Judge Chhabria reduced the verdict to $25.2 million.

Pilliod et al. v. Monsanto Co. was the third Monsanto Roundup lawsuit to proceed to trial. Brent Wisner was co-lead trial counsel for Alva and Alberta Pilliod, a couple in their 70s who alleged exposure to Roundup caused them to develop non-Hodgkin lymphoma. Brent delivered the opening and closing statements, presented most of the scientific evidence, and cross-examined many of Monsanto’s experts.

On May 13, 2019, the jury returned a verdict of $2.055 billion in favor of the Pilliods, finding that exposure to Roundup caused their cancer, and that Monsanto failed to warn consumers of this severe health hazard. The jury also found that Monsanto acted with malice, oppression, or fraud and should be punished for its conduct.

The Pilliod verdict is the largest personal injury jury verdict so far this year.

Brent’s recognition in the Daily Journal’s Top 40 Under 40 is one of several awards he has received for his work over the past couple of years. Following the verdicts in the first three Roundup cases to proceed to trial, Brent was named one of California’s Top 100 Lawyers for 2018 by the Daily Journal and the National Law Journal, and the Trial Lawyer Magazine named him one of America’s 50 Most Influential Trial Lawyers. Brent is also one of the lawyers recognized by The National Trial Lawyers Top 100 for the 2019 Trial Team of the Year award in the Mass Torts category.

In 2018, Law360 recognized Brent as a Titan of the Plaintiffs Bar based in part on his role as co-lead counsel in a complex trial that resulted in the first multi-million-dollar jury verdict against a brand-name drug-maker, GlaxoSmithKline (GSK). The jury found that GSK was liable for injuries caused by a generic version of the drug Paxil. Following the verdict, The National Law Journal recognized Brent and Baum Hedlund Aristei & Goldman as 2018 Elite Trial Lawyers and the first place winner in the category of Pharmaceutical Litigation.

The Daily Journal is known as one of the foremost legal publications in the United States, widely respected by lawyers across all practice areas for its comprehensive coverage and profiles of judges, appellate decisions, and other important legal information.