San Francisco, California – Jan. 30, 2019 – –A consortium of law firms have filed a lawsuit against Pacific Gas and Electric Company (PG&E) alleging the utility is responsible for the Camp wildfire that killed 86 people and destroyed thousands of homes in and around the town of Paradise, California.

California wildfire attorney, Ronald L. M. Goldman (board certified civil trial lawyer with more than 50 years of experience litigating complex litigation), Brian R. Strange (with decades of experience handling class action and complex litigation, including fire litigation), and Robert F. Kennedy, Jr. (renowned environmental lawyer and co-counsel to Baum Hedlund Aristei & Goldman) are among a group of lawyers who filed the Camp Fire lawsuit in San Francisco State Court (Case No. CNC-19-554581) on behalf of 51 people and a California Guild hall whose homes and property were destroyed or damaged, or who suffered injuries.

“The Camp Fire is just one example of the many tragedies caused by PG&E’s enduring failure to protect the public from the dangers associated with its operations,” stated attorney Robert F. Kennedy, Jr. “The utility has consistently chosen to put profit over people by giving elaborate raises to executives rather than implementing much-needed safety programs; it is beyond shameful.”

The lawsuit alleges the Camp wildfire started due to malfunctioning PG&E electrical equipment, which the utility had knowledge of before the deadly fire. According to the complaint, PG&E’s aging electrical infrastructure broke, causing a high-voltage power line to drop blazing molten material into dry vegetation that the utility was responsible for maintaining.

Strong winds, low humidity, and dry vegetation fueled the historic fire, which spread faster than warnings could be given. During the afternoon of Nov. 8, the Camp Fire spread to 10,000 acres in 90 minutes, or one football field every second. By nightfall, the wildfire engulfed more than 19 miles over an entire mountain; trapping, terrifying, and killing residents in its path. Escape routes became gridlocks and then fire traps. Hundreds were forced to flee from the consuming flames on foot.

David and Lori Phelps-Zink, longtime residents of Old Magalia, are among the plaintiffs to file suit against PG&E. The trauma of their evacuation and subsequent displacement compounded their losses, which are many. Like their neighbors and so many others who live in the area, the Camp Fire destroyed the Zink’s home along with precious and irreplaceable personal belongings; nothing survived.

“To the degree that PG&E’s neglect of its electrical distribution infrastructure caused so much loss and so much mess, particularly as such neglect may have been a choice between safety and profit, it should be held financially accountable,” says David Phelps-Zink, a musician who also serves as the president of the Paradise Community Guilds, a nonprofit volunteer community organization.They are a member of the California Guild, a 501(c)(8) fraternal organization that has evolved to support and advocate for healthy communities, family farms, local economies, cultural diversity, public schools and education, the arts, and a variety of charitable causes.

The Paradise Community Guilds lost its Norton Buffalo Hall in the fire, a venue that presented extraordinary musicians from around the world, and which was the scene of community youth gatherings, weddings, birthdays, funerals, workshops, banquets, classes, rummage sales, garden tours, wellness activities, and more. 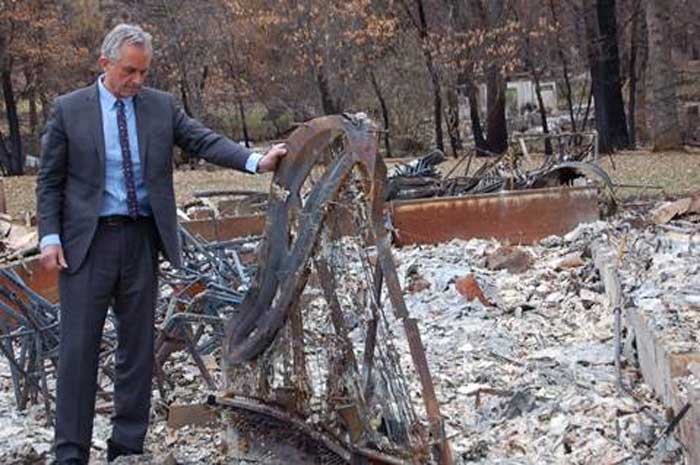 RFK, Jr. with the remains of a piano at Norton Buffalo Hall in Paradise

“Paradise Community Guilds retained Baum Hedlund Aristei & Goldman to join our voice with others demanding that PG&E be held to account financially, and to add pressure to evolve safer means by which electric power is generated and distributed,” the Guilds said in a statement. “Our organization needs financial restitution to build a new; even more, we need confidence that an electrical utility won’t be the cause of destroying our hall and our town ten years from now.”

California law requires utilities to inspect, maintain, repair and/or replace electrical infrastructure, thus ensuring that equipment is operating safely. This duty includes a responsibility to inspect and maintain vegetation in the areas near and around its equipment.

On the days leading up to the Camp Fire, PG&E began notifying approximately 70,000 customers of the potential that the company would turn off power for safety reasons given forecasts of extreme fire danger conditions.

Despite its own recognition of these impending hazardous conditions, on the day of the Camp Fire’s ignition, PG&E ultimately made the decision not to proceed with its plans for a power shutoff. It was not until Nov. 9, 2018, after the Camp Fire already incinerated the towns of Concow, Magalia, and Paradise, and at the request of authorities, that PG&E turned off power to some of its customers.

“PG&E’s total lack of regard for its consumer’s lives and property is inexcusable, and we will do everything in our power to hold PG&E accountable for the pattern of death and destruction it has caused, most recently with the Camp Fire.”

According to the allegations, had PG&E followed through with their responsibilities, the Camp Fire would never have occurred.

The lawsuit makes negligence, inverse condemnation, premises liability, trespass, public nuisance and other allegations against PG&E. The Plaintiffs in the case seek damages for loss of property, loss of income and earning capacity, medical expenses, expenses due to displacement, other economic and emotional losses and punitive damages as PG&E continues to display a shocking degree of arrogant complacency, refuses to modify its behavior, and continues to conduct its business with a conscious disregard for the safety of the public, including Plaintiffs.

Although PG & E announced plans to file for bankruptcy, their intentional misconduct, sufficient for at least some to question whether it should be charged with murder, may well prevent it from discharging the claims of the victims who lost everything in the Camp Fire tragedy.

To help Camp Fire victims better understand their legal rights, the law firm of Baum Hedlund Aristei & Goldman and the California Guild are holding Town Hall Workshops in Paradise and Chico on Feb. 16, 2019.

The Town Hall Workshops will help victims in the following ways:

►  Learn how to deal with insurance claims effectively.

►  Learn how to identify when a bad faith claim is necessary.

►  Learn how a civil lawsuit can recover damages beyond an insurance claim.

►  Learn what impact PG&E’s bankruptcy may have on the lawsuits.

The firm has handled thousands of cases against some of the world’s largest corporations, securing over $1.9 billion on behalf of clients across all areas of practice. In 2018, Baum Hedlund Aristei & Goldman was part of the trial team that won a $289 million jury verdict against Monsanto Company (now Bayer). The verdict earned Baum Hedlund the 2019 Trial Team of the Year Award from the National Trial Lawyers Top 100.

I serve as president of Paradise Community Guilds, a small but mighty local nonprofit volunteer organization with a vision to “Be the community you want to live in.” On our two-and-a-half-acre campus, was a lovely glade along a blackberry-lined creek that featured two organic gardens, a small orchard, a vineyard, and an outdoor stage. In the heart of this lovely place was the Norton Buffalo Hall—named for the celebrated harmonica virtuoso whose final years were lived in Paradise — where we presented extraordinary musicians from around the world, country and county once or twice a month, and which was the scene of community youth gatherings, weddings, birthdays, funerals, workshops, banquets, classes, rummage sales, garden tours, a wide array of wellness activities, and more.

All of this activity developed over the last decade, after years of decline. The hall and grounds had been neglected, but we were making improvements as soon as we could afford them. We had just put up a new roof, with funding and labor from our community, and had made several other upgrades to the facility, with more in the works. A beautiful baby grand piano was donated, and we were leasing to buy a top-of-the-line sound system. We had just purchased new chairs and tables. Nonetheless, our insurance would not cover the full replacement value of the hall, and we could not yet afford a personal property component. We were almost there.

Like most of Paradise, Norton Buffalo Hall was incinerated and all within. Our gardens were mostly ruined, the blackberries and our outdoor stage seem to have evaporated, and many of our beautiful trees are charred to the point of no return. Our insurance will cover but a fraction of the cost to rebuild.

Further, all members of Paradise Community Guilds have lost their place to live, both home owners and renters.

Post-Camp Fire, members and friends of Paradise Community Guilds have met weekly or twice weekly at Chico Guild Hall to connect, share needs and resources, to comfort each other, and to figure out next steps. We are all displaced, and the recovery of Paradise is expected to take a long time. Some members have moved out of state. Others have decided to relocate elsewhere in the county. And there is a corpus of us that want to take part in building a new Paradise, a stronger and more resilient town where we can truly “Be the community we want to live in.”

It seems the spark that lit the Camp Fire came from neglected PG&E infrastructure. Given the realities of our climate, we have to reduce the risk of yet another catastrophe hitting our town.

A for profit power utility has certain environmental and social obligations; among them, to minimize and manage the risk of fire through available technology upgrades and to maintain safety along the pathways of power distribution. Placing profit above safety by not replacing or properly maintaining the equipment prior to the start of the fire, PG&E broke faith with Paradise, Magalia, Concow, Yankee Hill, Chico, Berry Creek — all the communities of Butte County.

Paradise Community Guilds has retained Baum Hedlund Aristei & Goldman to join our voice with others demanding that PG&E be held to account financially, and to add pressure to evolve safer means by which electric power is generated and distributed. Our organization needs financial restitution to build anew; even more, we need confidence that an electrical utility won’t be the cause of destroying our hall and our town ten years from now.