Robert F. Kennedy, Jr. is co-counsel with Baum Hedlund Aristei & Goldman in the Gardasil litigation. Kennedy started working with the firm after the mass toxic tort case against SoCalGas stemming from the gas well blowout in Porter Ranch, California. Since then, he has been an integral part of Baum Hedlund’s Monsanto Roundup cancer litigation team and the California wildfire litigation team.

Named one of Time magazine’s “Heroes for the Planet” for his success helping Riverkeeper lead the fight to restore the Hudson River, RFK, Jr.’s reputation as a resolute defender of the environment stems from his proven track record of successful legal actions. 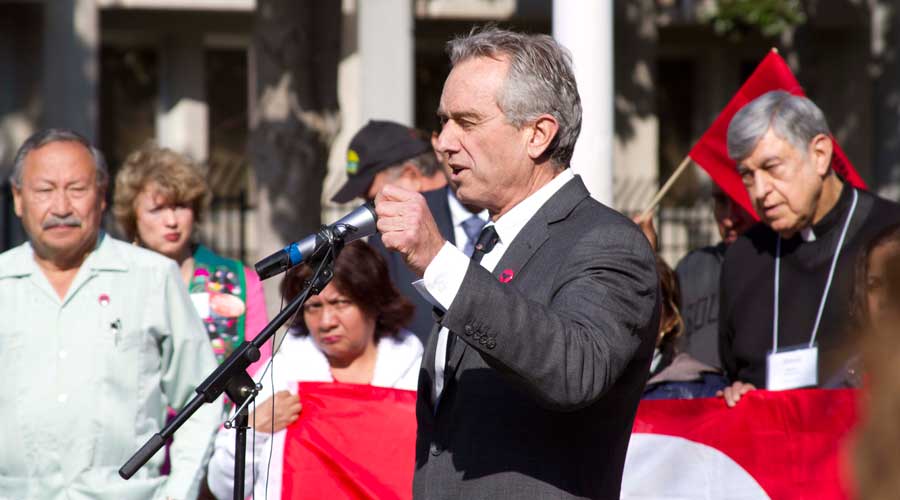 Bobby is Founder and President of Waterkeeper Alliance and Founder of Children’s Health Defense. Until 2017, he served as Senior Attorney for the Natural Resource Defense Council and Member and Chief Prosecuting Attorney for the Hudson Riverkeeper. He was also a Clinical Professor and Supervising Attorney at Pace University School of Law’s Environmental Litigation Clinic. He is currently professor emeritus at Pace. Earlier in his career, he served as Assistant District Attorney in New York City.

He has worked on environmental issues across the Americas and has assisted several indigenous tribes in Latin America and Canada, successfully negotiating treaties protecting traditional homelands. Bobby is also credited with leading the fight to protect New York City’s water supply. The New York City watershed agreement, which he negotiated on behalf of environmentalists and New York City watershed consumers, is regarded as an international model in stakeholder consensus negotiations and sustainable development.

In addition to his environmental activism, Kennedy has also worked on several noted political campaigns, including Edward M. Kennedy’s campaign for president in 1980, Al Gore’s presidential bid in 2000 and John Kerry’s in 2004.

A noted author, Mr. Kennedy’s published political books include the New York Times’ bestseller Crimes Against Nature (2004), The Riverkeepers (1997), and Judge Frank M. Johnson, Jr: A Biography (1977). He has also published three children’s books, including Robert Smalls: The Boat Thief (2008), American Heroes: Joshua Chamberlain and the American Civil War (2007) and St. Francis of Assisi (2005). In 2018 he published, American Values: Lessons I Learned from My Family.

Mr. Kennedy has also contributed articles that have appeared in The New York Times, The Washington Post, The Los Angeles Times, The Wall Street Journal, Newsweek, Rolling Stone, Atlantic Monthly, Esquire, The Nation, EcoWatch, Outside Magazine and The Village Voice, among many others.

Mr. Kennedy is a graduate of Harvard University. He also studied at the London School of Economics and received his law degree from the University of Virginia Law School. After graduating from law school, he attended Pace University Law School, where he was awarded a Masters in Environmental Law.

Mr. Kennedy has been fighting for safer vaccines for years. A staunch consumer advocate that has never shied away from fights with corporations that put profit over people, Mr. Kennedy is working alongside our firm to represent victims who experienced vaccine-related injuries after receiving Gardasil.

The Vaccine Adverse Event Reporting System (VAERS) has received more than 64,000 case reports of adverse events from people who received the Gardasil HPV vaccine. No other vaccine on the market has produced more reported injuries. The Vaccine Injury Compensation Program has paid out millions of dollars in damages for Gardasil-induced injuries and deaths.

“Before there was Gardasil, there was Vioxx,” said Mr. Kennedy after filing a Gardasil lawsuit with Baum Hedlund in 2020. “Merck paid billions to settle civil allegations that it purposely hid Vioxx’s cardiovascular risks. The company also paid $950 million in fines as a result of their criminal conduct. When Gardasil came along, the boardroom at Merck joked that its HPV vaccine could ‘Help Pay for Vioxx.’ Sure enough, some of the same shadowy cast of characters who were involved in the Vioxx scandal worked on Gardasil, and they employed the very same methods of manipulating science and obscuring risks as they did with Vioxx. And just as with Vioxx, Gardasil has left a calamitous health disaster in its wake.”

Despite the reported injuries and deaths, Gardasil has never been shown to prevent cervical cancer, itself. On the contrary, studies have shown that systemic administration of Gardasil leads to increased rates of cervical cancer and other serious health issues, according to the lawsuit allegations.