On Sunday, February 3, 2013, a tour bus carrying 38 people careened down Highway 38 near Yucaipa and crashed into two vehicles before rolling over. Seven passengers were killed in the bus crash and over 30 others were injured, several critically. A man in a pickup truck hit head-on by the bus died from his injuries a few days later.

According to investigators, the driver of the bus reported brake problems, telling the police after the crash that he believed they failed. Crash survivors also reported that they heard a grinding noise and smelled burnt brakes. Federal records showed that the 1996 European-made bus had a lengthy history of maintenance violations and brake-related issues. According to FMCSA records, a string of inspections revealed nearly 20 violations, some of which included brake-related issues. The VanHool bus was ordered off the road twice in 2012 after inspections found serious mechanical problems.

Survivors told reporters that there were no seatbelts on the bus, which is not uncommon in tour buses. Many of the bus’s occupants were ejected from the vehicle during the violent accident, making the lack of seatbelts a likely contributor to the many deaths. 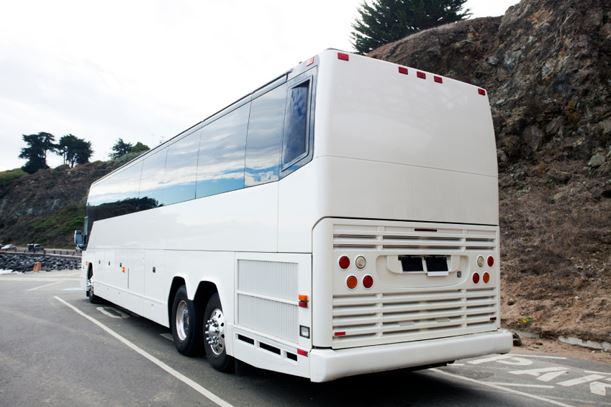 In the wake of the 2013 crash near Yucaipa, the U.S. Department of Transportation (DOT) shut down the owner of the bus, National City-based Scapadas Magicas. The DOT ordered the bus company to stop operating motorcoaches in the U.S. just five days after the grisly crash, stating that their vehicles posed an “imminent hazard to public safety.”

This tragedy is just one in a long list of bus crashes that motivated safety advocates to call for legislation to enhance bus crash avoidance capabilities, occupant protection, and operational standards.

Among other things, MAP-21 led to improvements in the following areas:

School bus crashes kill an average of 164 people per year. Over the past six years, about 70 percent of the deaths in fatal school bus crashes were occupants of vehicles other than the school bus and 20 percent were pedestrians according to data from the National Highway Traffic Safety Administration’s Fatality Analysis Reporting System (FARS).

Every weekday morning, around 25 million children across America board school buses. For years, regulators have said that school buses are the safest form of transportation for students, but several notable school bus crashes, like the fatal crash in Chattanooga on November 22, 2016, remind parents that there are still very real risks.

Here are five key school bus safety tips to keep your kids from harm on their way to and from school:

The first of our school bus safety tips involves finding out exactly how safe—or unsafe—your child’s school bus is now. Here’s what you need to check:

According to the U.S. Department of Transportation, school buses are the safest method of transportation for students traveling to and from school. Some schools, however, use large passenger vans, instead of school buses, to save money. Not only is there a federal ban on dealerships selling these vans for use in transporting schoolchildren, but also these school-bus substitutes can be downright dangerous.

The height and design of school buses have been purposefully chosen to prevent injuries in case of a bus crash, and the familiar big yellow buses are operated by drivers with commercial licenses or special training. Large passenger vans are unlikely to hold up as well in an accident and can be driven by any licensed driver.

A quick look in the doorjamb of your child’s school bus (or on the driver’s side above the windshield) should reveal a certification sticker that labels the vehicle clearly as a school bus.

On November 8, 2015, the National Highway Transportation Safety Administration (NHTSA) revised its position on seat belts, with NHTSA Administrator Mark Rosekind announcing, “The position of the National Highway Traffic Safety Administration is that seat belts save lives. That is true whether in a passenger car or on a big yellow bus.” Rosekind went on to say that the NHTSA believes “every child on every school bus should have a three-point seat belt.”

Is There Room for Everyone?

An overcrowded bus can leave students perched haphazardly on the edge of seats or even standing in the aisles. In the event of a bus accident, the design of the school bus seats (and any seat belts that might be onboard) will provide no protection to those children.

Pay attention to your bus’s capacity and whether you see students unable to fit comfortably on seats.

2. Get to Know Your Driver

In the case of the Chattanooga school bus crash that killed six children, police believe that the driver was operating the school bus recklessly and speeding. There had also been complaints filed against the driver and he was in another school bus accident only two months before.

Knowing more about the individual driving your child to school is important. Talk with him or her and ask questions. If you have concerns after the conversation, contact your school district to find out how they screen drivers and how they monitor any new activity on employee driving records.

While you can put these school bus safety tips into practice from home or for a few minutes each day, your child will see much more of what actually happens on the school bus in their daily travels.

These are some of the things they need to know:

4. Speak Up About Issues

If your child’s school bus driver gives you a reason to be concerned, or your child has voiced concerns to you, take that information to the school principal, and, if necessary, to the bus company contracted by the school. Contact other parents to see if they’ve noticed similar issues or if their children have said anything similar to yours, and present that information as well.

Finally, you can file a complaint through the Federal Motor Carrier Safety Administration.

While it’s important to convey any issues to your school, it is equally important to follow up on what’s being done about them. Check back in with your principal about a bus driver that may be driving recklessly, or continue to call on your school district to add seat belts to their school buses. It may take more than one try to get resolutions to the issues you’re facing, and it may require contacting multiple people or organizations. In the end, though, it’s worth it to ensure your child’s safety.

Per NHTSA bus safety rules, small school buses with a gross vehicle weight of 10,000 pounds or less are required to have lap or lap/shoulder seat belts. Because small school buses are closer to passenger vehicles (which require seat belts), regulators believe it is necessary to provide small bus occupants with seat belts for protection in case of an accident.