On Feb. 22, 2020, an Executive Lines charter bus veered off Interstate 15 and crashed, coming to rest on its roof. Some passengers were ejected in the San Diego bus crash, which killed three and left 18 other people with injuries. The accident attorneys at Baum Hedlund Aristei & Goldman are investigating this incident.

Greyhound Bus Shooting | One Dead, Five Wounded in Trip from LA to SF

On February 3, 2020 at 1:27 A.M., a man opened fire inside a Greyhound bus traveling from Los Angeles to San Francisco. Forty-two passengers were aboard the bus at the time of the fatal shooting. One woman was killed and five others wounded.

Local law enforcement officials were able to arrest the gunman, Anthony D. Williams of Capitol Heights, Maryland. Authorities have said there does not appear to be a connection between Williams and any of the passengers — it is unclear why he decided to open fire on the Greyhound bus.

A tour bus traveling to Bryce Canyon National Park in Utah rolled over and crashed into a guard rail on September 20, 2019. At least four people died and at least 12 other people were hospitalized with injuries that ranged from serious to critical. The bus driver was also injured.

Translators were called to help doctors and nurses communicate with injured passengers who did not speak English. Translators also helped investigators interview witnesses. 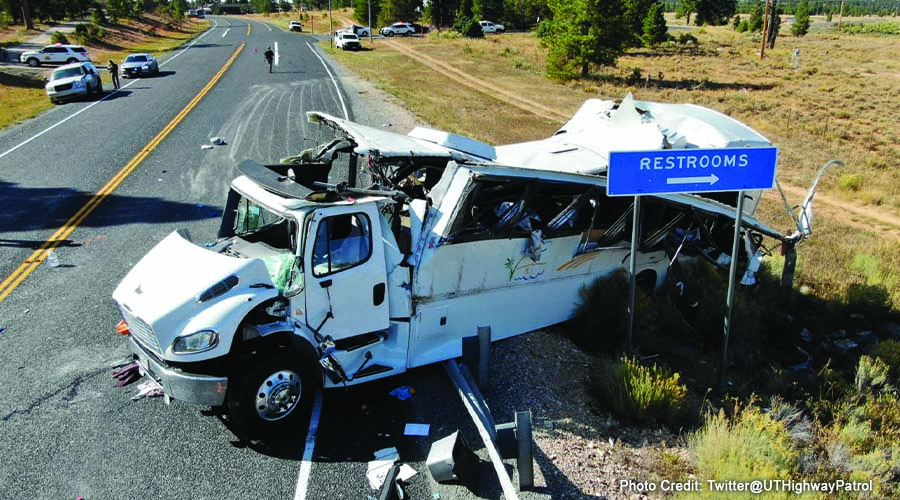 On Wednesday, December 5, 2018, a semi-truck driving the wrong way crashed into a school bus returning a girls junior varsity basketball team to Normal from a game in the Champaign region. The crash occurred on Interstate 74 between Bloomington and Downs. An adult volunteer traveling with the team was killed. The truck driver also died.

On Thursday, November 14, 2018, a Teague VIP Express tour bus hit a patch of ice and flipped over on I-269 in DeSoto County, Mississippi. Of the 46 people on board, at least two have died and 44 others were injured. Among the injuries sustained were broken ribs, broken limbs, and concussions. 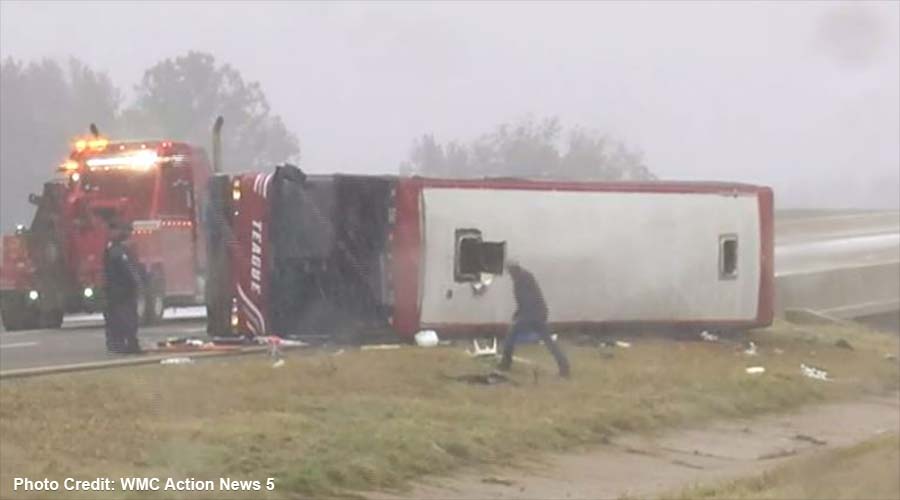 On Aug. 30, 2018, shortly before 1:00 p.m. local time, a Greyhound bus transporting 49 passengers collided with a semi-truck outside the small town of Thoreau, New Mexico, causing multiple casualties and severe injuries.

Video footage taken shortly after the fatal accident shows the front of the bus completely sheared off, with scattered debris in the grassy median separating westbound and eastbound lanes.

On June 4, 2018, a tour bus crash in Canada killed multiple people and injured at least two dozen others. On the bus were two Americans — the bus driver and one of the tour guides. The tourists were all Chinese citizens as was a second tour guide. 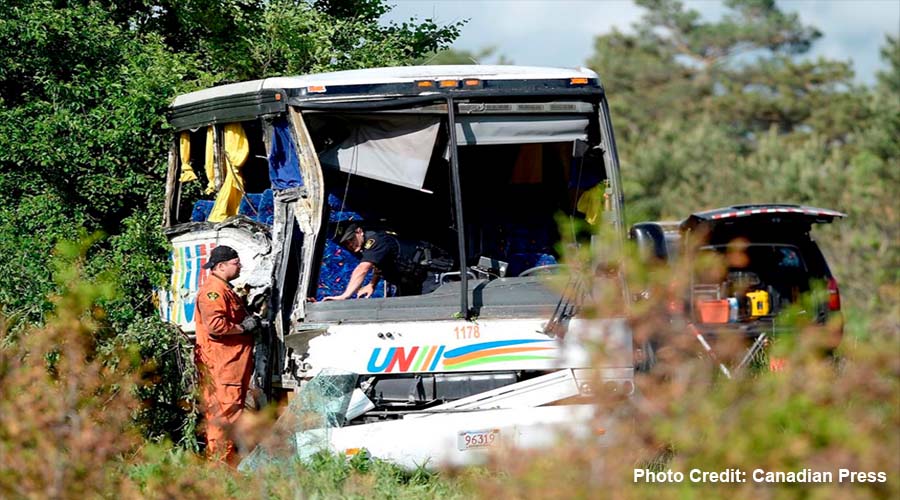 On May 17, 2018, a major crash between a dump truck and a school bus in Mount Olive Township, New Jersey left at least two dead and several others hospitalized. According to local law enforcement officials, one child and one adult were killed in the bus accident and at least 11 others were sent to area hospitals, including one person who was listed in critical condition.

The New Jersey school bus crash happened at around 10:30 a.m. on the westbound side of Interstate 80 (I-80) near Exit 25. State Police issued a preliminary statement after the crash, calling the situation “serious.”

The collision caused the school bus loaded with children to flip onto its side on the highway’s grassy median. Witnesses to the accident said the impact ripped the bus off its frame and sheared off the front of the dump truck. Pictures of the school bus show the mangled and partially charred passenger cabin nearly separated from its front end. 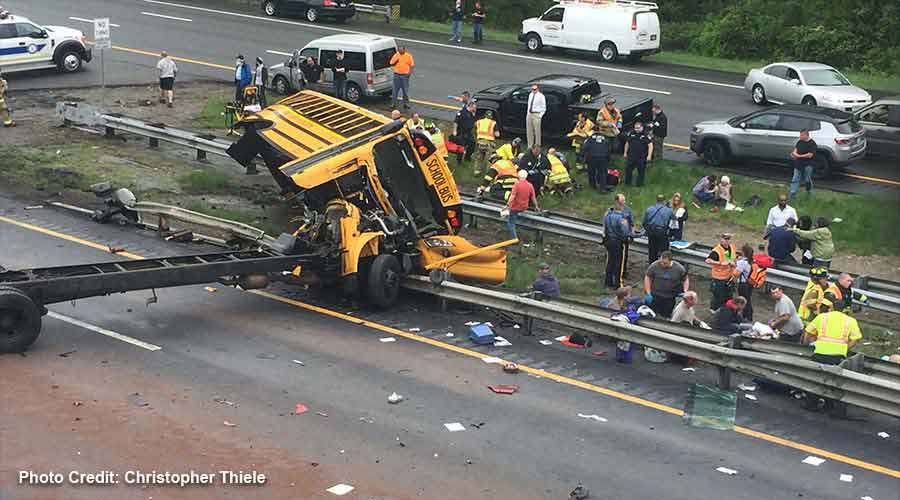 On Dec. 19, 2017, a tour bus crash in Mexico left 12 people dead, including eight Americans. Over a dozen other people sustained injuries in the accident, which occurred in an area called Costa Maya, a stretch of Caribbean coast on the eastern side of the Yucatan Peninsula in the state of Quintana Roo.

While an investigation into the Mexico tour bus crash is in its early stages, Quintana Roo state prosecutor Miguel Angel Pech Cen told the media that it appears the bus driver’s negligence and potential speeding led him to lose control of the vehicle and leave the road. When he attempted to get the bus back on the roadway, the bus flipped and hit a tree.

On November 21, 2016, a school bus crash tragically took the lives of five young students from Woodmore Elementary School in Chattanooga, Tennessee. Thirty other children were injured in the school bus accident, which was one of the worst in recent years. 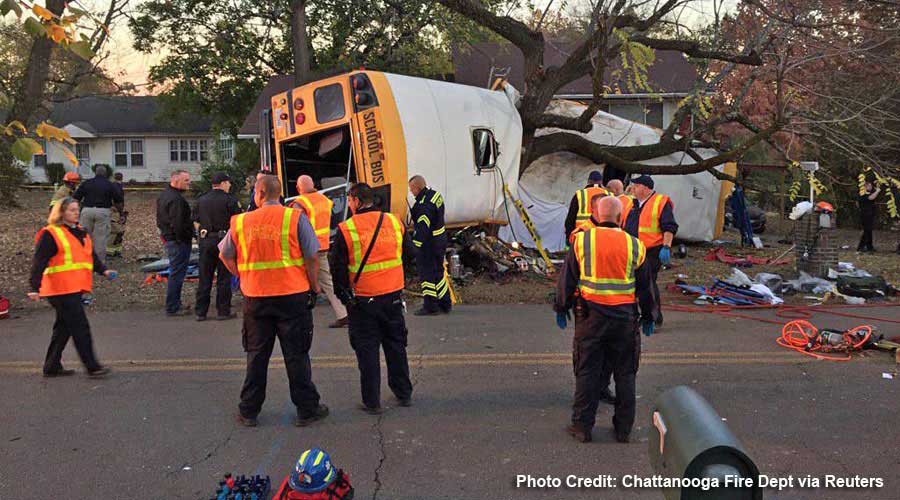 On November 1, 2016, a fatal bus accident between a school bus and a Maryland Transit Administration (MTA) bus in Baltimore left six people dead and 10 more injured. The Baltimore bus crash was reported just before 7:00 a.m. on Frederick Avenue and Monastery Avenue.

In the early morning hours of October 23, 2016, a tour bus returning passengers to the Los Angeles area from a casino slammed into a big rig near Palm Springs. The California tour bus crash was reported at 5:17 a.m. on the westbound side of Interstate 10, just before Indian Canyon Drive. Thirteen people lost their lives and 31 others sustained injuries in what will go down as one of the deadliest bus crashes the state of California has seen in decades. 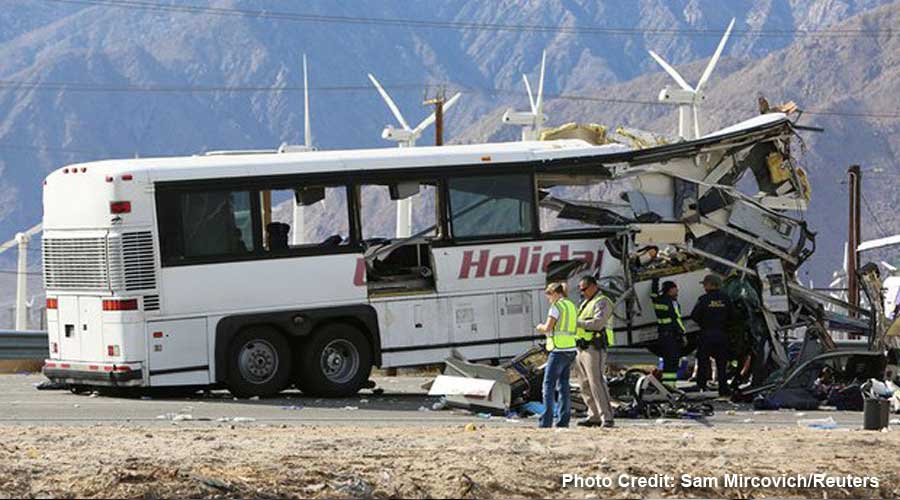 Eight-Year-Old One of Four Dead in Rockingham Bus Accident – September 17, 2016

Four people were killed and dozens more were hospitalized on Saturday when a tire failed on a charter bus transporting a junior college football team and the bus crashed in Rockingham, North Carolina. Authorities say 46 people were on the bus at the time. The cause of the accident remains under investigation.

Four people were killed and at least 16 others sustained injuries early Tuesday morning when a tour bus swerved off of Highway 99 and collided with a sign pole outside of Merced, California. The Autobuses Coordinados USA bus and an estimated 30 passengers were on their way to Pasco, Washington from Mexico when the Highway 99 tour bus crash occurred at around 3:25 a.m. An investigation is underway.

Four people were killed and an estimated 25 others sustained injuries early Saturday morning in a bus accident in the Florida Panhandle. The Florida bus crash happened at the intersection of Woodville Highway and Coastal Highway 98 in Wakulla County. The NTSB is assisting the Florida Highway Patrol in the investigation.

A church bus crash outside of Highland, California left 21 people injured on May 22, including seven who sustained serious injuries. The bus was one of several transporting an estimated 200 women back to Iglesia de Cristo Ministerios Llamada Final church in Downey after a retreat to the mountains. The cause of the crash remains under investigation.

Eight people were killed and over 40 others sustained injuries on Saturday when a tour bus crashed on a south Texas highway. The tour bus, owned by OGA Charters, overturned on the northbound side of U.S. 83 about 46 miles north of Laredo.

A bus accident in Ennis, Texas sent 10 senior citizens to area hospitals on Thursday morning. The Ennis bus accident came days after a fatal school bus accident claimed the life of a motorist and left three students with injuries. Both crashes remain under investigation.

Several people were taken to area hospitals after a Greyhound bus collided with a Chevy Malibu passenger vehicle in North Stonington. The Greyhound bus was transporting dozens of people to Foxwoods Casino when the crash occurred at around 8:00 p.m. on Route 2. The driver of the Malibu had to be extricated from the vehicle and was later rushed to an area hospital. Several bus passengers were also injured in the wreck. Authorities are investigating.

A recent bus accident took the lives of four international students and sent at least 50 others to the hospital, many with critical injuries. The charter bus was filled with new students on their way to an orientation event, many of them participating in the college’s widely popular international program. The bus was driving along the 83-year old Aurora Bridge when it was hit by a duck boat tour bus that suddenly swerved into its lane. This bus crash is currently under investigation by the National Transportation Safety Board (NTSB). So far the NTSB has discovered that the duck boat involved in the bus accident had been operating for two years without repairing an axle that the international company had known about since 2013. In the wake of this new information about the bus accident, all Ride the Ducks tours have been halted until the investigation is complete and all of the company’s vehicles and drivers pass a rigorous inspection.

A Houston high school bus was travelling east on I-610 at around seven in the morning in order to drop off students at Furr High School when a car driven by a Houston Independent School teacher swerved into the path of the bus while trying to avoid another car drifting into her lane. The school bus was hit by the teacher’s car. The bus driver then over-corrected while trying to avoid further damage. This overcorrection sent the school bus smashing into the guardrail and off the edge of the overpass, causing it to flip before landing on its side on the street below. Two students died and three others were seriously injured in this recent school bus accident. The NTSB and local police departments are currently investigating the causes of this school bus accident, but they have noted that the bus was only six years old and was equipped with seat belts.

A new prison bus was travelling on an icy overpass on Interstate 20 near Odessa, Texas to Sanchez prison in El Paso when it hit debris from the guardrail that had been left on the road from a previous accident. After hitting the damaged guardrail, the bus veered to the side before losing control and going over the median. The airborne bus flew down an embankment, skidding directly into the path of a passing Union Pacific freight train. The ensuing train and bus crash killed 10 people and injured five others. Horrifically, the eight inmates who died were handcuffed together in pairs, in seats that did not have seat belts.

A school bus driver failed to disclose hid a medical condition that could have deprived him of a commercial driver’s license. While driving, he passed out, causing the bus to go off the road, crashing into a tree. All 11 students on board were injured along with the bus driver. He was later charged with felony child abuse and endangerment, along with perjury by declaration, in connection with the school bus accident. Baum Hedlund represents two students injured in this school bus crash. KNBC News Los Angeles interviewed a Baum Hedlund bus accident attorney about the bus crash. She told NBC that she didn’t think the bus driver intended to harm the children, but regardless, the Orange Unified School District should be held accountable for his negligent conduct while operating the bus, “They hired someone who covered up a medical condition. They were responsible for putting him behind the wheel.” Failure to disclose disqualifying medical facts by school bus drivers and commercial truck drivers is all too common, and calls into question the adequacy of investigations by employers of commercial bus and truck drivers into prospective employees’ medical history.