What Causes a Building Collapse?

Building collapses are, typically, very preventable, especially since there are so many regulations in place to prevent such events. Many people are familiar with the phrase “up to code,” which refers to these strict construction guidelines. So, how are there still so many building failures occurring across the country? Sadly, while there are many factors that can cause a building collapse, the most common causes have some element of human error, or even worse, human greed, at play.

Building Collapse Due to a Natural Disaster

Many collapses take place during natural disasters such as earthquakes. One might think that such occurrences are simply out of our control, but in reality there are construction standards that are specifically designed to avoid a structure collapse during such disasters. When constructing anything from houses to offices, the architects, engineers and builders must be aware of natural elements that may pose a threat to the structure. For example, in California, all buildings are required to fit strict earthquake stability codes.

If you or someone you know has been harmed by a building, contact the experienced attorneys at Baum Hedlund Ariseti and Goldman for a free consultation. 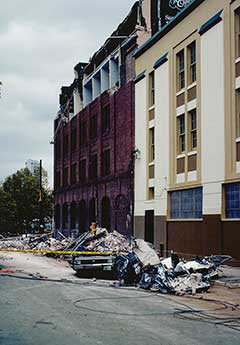 Despite these rigid standards, during the Loma Prieta quake in the San Francisco Bay area on October 17, 1989, the facade of a building owned by Gap tumbled down on pedestrians and cars below, killing our client’s son. In the suit against them, we alleged that the owners of the building were warned by engineers who worked for them that the building could collapse in a “medium to large” “seismic event” (earthquake), but they did not heed that warning and failed to strengthen the building or warn tenants of the danger.

San Francisco’s building structure code requires seismic strengthening of unreinforced masonry buildings that have had substantial changes in use, specifically to avoid building collapses like the one in 1989. According to the San Francisco Chronicle, City real estate records at that time revealed that the Gap building at Sixth and Bluxome streets was an unreinforced masonry structure that was built in 1908 as a warehouse. The real culprit behind this tragic building collapse was not the earthquake, but the owners’ lack of care in making the necessary changes to the structure as required by law.

Baum Hedlund attorney and mechanical engineer, Paul J. Hedlund, later testified before the California Seismic Safety Commission about seismic safety and the possibility of further building failures after the Loma Prieta Earthquake. But even Paul Hedlund’s testimony cannot curb human greed and only a few short years later we represented four people who were killed and six people who were injured in the Northridge Meadows Apartment Building collapse, which occurred as a result of the Northridge, California earthquake in 1994. 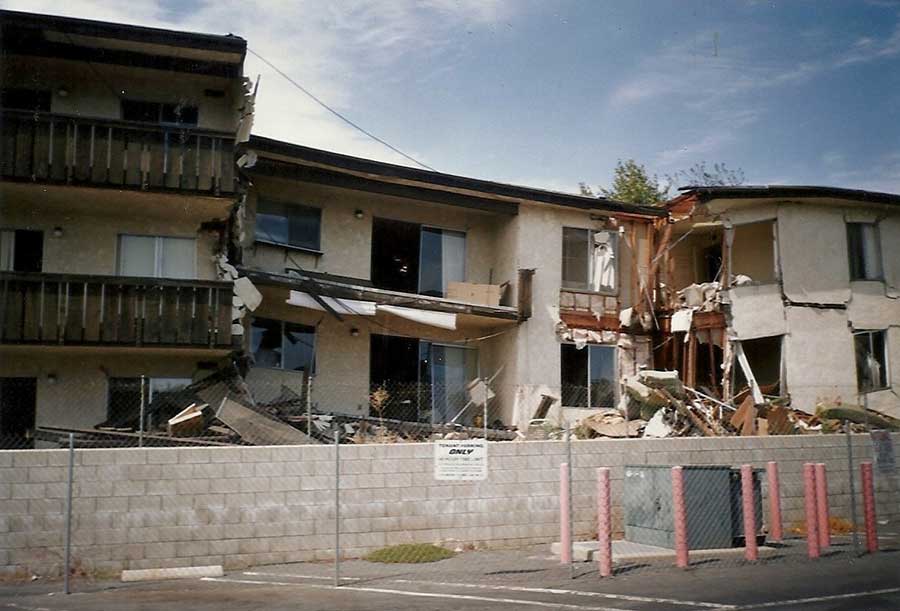 During our investigation of the horrific Northridge Meadows Apartment collapse, we discovered that the apartments were built in a shoddy fashion. The most flagrant of the building violations was the fact that instead of using plywood, as called for in the building plans, diagonal strips of 1 by 6 inch wood under 1.5 inches of concrete were used to form the second and third floors. Properly sized sheets of plywood would have provided more resistance to the quake and prevented all or some of the destruction. The apartments were also built with nails that were too small, joist hangers that were half the size as specified in the plans, and metal pipes supporting apartment units over parking spaces were inadequate and not as specified in the building plans. All of these changes made during construction were cost cutting techniques that put lives at risk from preventable building collapses. As a result of using these improper construction materials, 16 people lost their lives.

It is apparent that tragedies occur when corrupt individuals disregard the safety of others, but what if structure failures happen even when everyone did everything right? In Baum Hedlund’s decades of experience as lawyers in this field, we have never seen a case where no one was at fault when someone is injured or killed by a building collapse. Nor, is this kind of blatant disregard for the public’s safety a notion of the past. These kinds of careless decisions have persisted despite many increased regulations over the years.

Take, for example, the Indiana State Fair Stage Collapse. At first glance, it seems as though a powerful storm that rolled in on August 13th, 2011, just before a large concert headlined by the band Sugarland, was the only factor to blame for the ensuing structure failures. But a thorough examination into the surrounding events tells a very different story.

Throughout the day, the National Weather Service issued warnings for the storm and the Director of the Indiana State Fair Commission even called a meeting to discuss delaying or cancelling the show in order to protect their guests. After that meeting, the Director chose to let the band, Sugarland, decide if they wanted to continue with the show, figuring that the band should have the final say on the situation, since their contract had a provision that their shows could only be cancelled due to weather and with the band’s approval. Thirty minutes later a state police captain informed the Director that she should cancel the show and evacuate the crowd. The Director had an announcer state that a storm was approaching, but that the show would go on. After hearing the announcement, the police captain told the Director again that the show needed to be called off and the area evacuated. As the Director and police chief were headed to the stage to make a second announcement, the entire stage structure collapsed forward into the crowd, killing seven and injuring 58.

An investigation into the tragedy found that multiple components in the structure were insufficient to resist winds over 43 mph, even though construction standards required the structure to withstand winds up to 68 mph. In addition to this violation of the building code, there were a number of oversights on every level regarding the design, construction and inspection of the structure before allowing its use at the Fair. That and the lack of emergency preparedness protocols among the Indiana State Fair officials, was a recipe for disaster. What initially seemed like an unavoidable structure collapse brought on by a force of nature was actually precipitated by a series of mistakes, standing like dominoes, waiting for the first one to fall.

Using cost cutting techniques can be dangerous. It is an important contributor to building failure. The reason why these cost saving tricks continue to plague our current infrastructure is because they come in many different forms and are very difficult to police. Corners are cut by an owner trying to build cheaply, almost as often as they are cut by a contractor trying to get a job finished on time. Even the official inspectors can skip crucial steps when they are overburdened, and higher-ups may fail to respond due to lack of interest.

The Philadelphia Salvation Army building collapse is a prime example of a combination of these careless decisions. On June 5th, 2013, a neighboring structure in the process of demolition suddenly fell onto a Salvation Army thrift store, trapping dozens of staff and shoppers under the rubble. Six people died and 14 were injured during the building collapse. The reason why? The owners of the building that was in the process of being demolished and the Salvation Army were deadlocked in a dispute over how the demolition would take place and what protections would be given to the Salvation Army store. During these stalled negotiations, the building owners reached out to several top city officials and the Salvation Army executives, citing the dangers of a possible building collapse when leaving the structure partially demolished for so long and asking for someone to intervene. No city official intervened and the negotiations continued to prove fruitless, so the proprietors proceeded with demolition anyway. Meanwhile, all agencies responsible for overseeing the demolition process failed to cite many glaring offenses that were indicating a potential structure collapse—allowing demolition to continue. The contractors in charge of the demolition, in order to cut costs, proceeded in an unsafe manner, removing many structural supports from the lower levels of the structure first and then bringing in heavy machinery to begin demolition.

In the investigation following the building collapse, several criminal indictments were levied against those who willfully endangered lives in order to demolish the structure at a faster pace. But such belated measures are rarely a deterrent to people trying to save a few extra dollars. Instead, individuals find it all too easy to gamble with the public’s safety even in the wake of high profile building failures.

How Do We Stop a Building Collapse?

Baum Hedlund Aristei & Goldman is dedicated to holding accountable those who are responsible for contributing to building collapses. We are also dedicated to improving awareness about the current risks that innocent bystanders face each day from similar events. We encourage anyone who knows about an unsafe structure to say something before it is too late to prevent dangerous building failures. Always report damaged, unsafe, or wobbly structures to a landlord or owner, if repairs are not made in a timely fashion call city inspectors and bring their attention to the issue. Unfortunately, relying on building managers, contractors and even the official building inspectors, to notice and act on the dangerous signs of an impending building collapse, is far too often not enough to prevent such a tragedy from occurring .

Who is Responsible for a Building Collapse?

One would think that after their negligence is exposed, those responsible for building collapses would try their hardest to make the situation right for those killed and injured by the incident. But sadly, we have found that all too often that scenario couldn’t be farther from the truth. Most culpable parties try their hardest to hide their involvement or shift blame for building collapses onto others. It usually takes the help of diligent professionals to identify those responsible.

Take for example the fallout from a balcony collapse in Chicago. On June 29th, 2003 the worst porch collapse in U.S. history took place. During a party, the top floor balcony collapsed, taking down the two balconies beneath it, killing 13 and injuring 57. After an investigation, the cause of the accident was poor construction. The owners of the building were never given a permit to build the balcony, but proceeded to do so anyway. The structure they created was 81 square feet larger than permitted, had improper supports, undersized lengths of wood for its flooring and was attached with screws that were too short.

This balcony was a disaster waiting to happen, and yet, the site was inspected five times by the City of Chicago’s Inspectional Service Department without earning a single citation for the many code violations. Nevertheless, both the building owner and the City tried to blame the victims for their own negligence. The owner said too many people were at the party and that his unapproved and improper construction of the balcony had nothing to do with the building collapse. The City filed a lawsuit against the owner for installing the unsafe balcony, while at the same time hedging their bets by suing two of the survivors of the building collapse. While they later dropped the suit against the victims, it was made clear that priority number one for any guilty party is to shift the blame onto others, even to those who were harmed in the building collapse.

This type of blame shifting and victim blaming is sadly not unheard of in these situations. Therefore, it is important to make sure that those who are victims of building collapses are protected by lawyers experienced in handling the difficult issues that arise from such horrible tragedies.