“Merck is still running ads scaring parents with false claims about the dangers of HPV and cervical cancer,” Attorney Kennedy said. “The truth is Merck has no idea if Gardasil actually prevents cervical cancer — there isn’t a single clinical study to validate that claim.”

In addition to Ms. Herlth, our attorneys are advocating for several other clients against Merck: 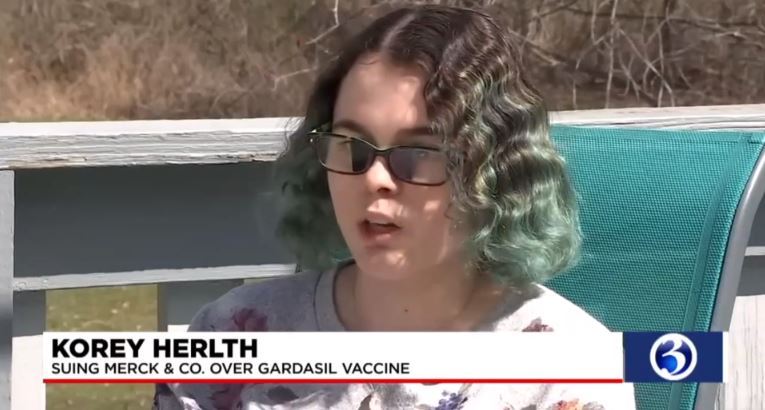 Local Family Speaks Out About Lawsuit Against Merck’s Gardasil Vaccine

Prior to receiving her first dose of the HPV vaccine, Korrine Herlth was a joyful, healthy girl who loved music and animals. She was part of the New England Chamber Children’s Choir (The Trebles), her church choir, and her middle school and high school choirs. But her life took a turn for the worst when she was just 15 years old.

Ms. Herlth’s mother, Andrea Herlth, consented to have her child vaccinated against HPV. She thought she was doing the right thing as a mother, as Merck had marketed the vaccine as a safe preventative measure against HPV and cervical cancer.

On October 2, 2013, Ms. Herlth received her first dose. On December 3, 2013, she received her second. Not even a week later, she started to experience dizziness, shakiness, nausea, faintness, and headaches, as well as an increased heart rate. Due to these symptoms, her mother did not allow her to get her third dose.

Ms. Herlth’s symptoms only worsened from here on out, growing to include:

Faced with these health issues, Ms. Herlth was no longer able to participate in the activities she previously enjoyed or even attend school. She could hardly walk down the halls to class without having trouble.

“My daughter has been assaulted on a systemic level,” her mother said. “Currently, there is no known cure, no offered hope of reversing the damage, just a series of trial treatments that have either failed her or exacerbated symptoms. It is a devastatingly helpless feeling watching my only child decline without hope of better days ahead.”

With great perseverance and the help of her dear guide and service dog Max, Ms. Herlth was able to graduate and walk to receive her diploma during her school’s commencement ceremony. Max was Ms. Herlth’s pet before she received her first shot of the HPV vaccine. After her health declined, Ms. Herlth was determined to learn how to train Max as a guide and service dog. The family hired a professional to train Max, and he can now help her retrieve dropped items, nudge her if her heart rate exceeds 100, and assist her if she passes out from a seizure.

Although Ms. Herlth had hopes of attending community college to study animal science, she had to defer her education due to her severe health issues. And while ketamine infusions alleviated some of her chronic pain, she has not been able to receive this treatment since the beginning of the COVID-19 pandemic.

“I was a happy kid,” Ms. Herlth stated. “But Gardasil has made my life a living hell. The things I loved doing were ripped away from me. … I just want my old life back.”

Besides vision loss, seizures, sleep apnea, and hypoxia, her clinical diagnoses also include but are not limited to the following:

Baum Hedlund Aristei & Goldman is a national law firm at the forefront of the movement to hold Merck accountable for its actions. We have a track record of success in litigating cases against large pharmaceutical companies, such as Bayer (formerly Monsanto). Our nationally acclaimed attorneys have always fought for the rights of consumers, and we do not plan on stopping anytime soon.

“Most people have no idea that Gardasil can cause their injuries, nor do they typically find out about the connection from their health care provider, unless they are treating with a specialist,” Attorney Baum explained. “It is unfair that people with very serious injuries after receiving this vaccine are in the dark about it. This is something we are actively working to change.”

Please note: Our firm is not against vaccines. We are against pharmaceutical corporations that intentionally mislead customers about the safety and efficacy of their products.

To learn more about this case, please read our press release. Please contact Baum Hedlund Aristei & Goldman online today to get in touch with a member of our legal team, if you have suffered a Gardasil vaccine injury.