Aug. 12, 2020 – Los Angeles, California – – The law firm of Baum Hedlund Aristei & Goldman filed a police misconduct lawsuit today against the Los Angeles Police Department (LAPD) on behalf of 24-year-old plaintiff CJ Montano, aka Iz Sinistra, a Marine Corps Veteran, who LAPD officers shot in the head with a rubber bullet as he stood with his arms raised while participating in a protest in the Fairfax District.

Baum Hedlund Aristei & Goldman attorneys Pedram Esfandiary, Monique Alarcon, Timothy A. Loranger, and Ronald L. M. Goldman filed the complaint in U.S. District Court for the Central District of California, Los Angeles, after having submitted a claim with the City and County of Los Angeles on June 24. Coincidentally, the lawsuit comes just days after the LAPD released body camera video footage that clearly shows LAPD officers shooting Mr. Montano with so called “less-lethal munitions” on his body and in the head with a 40 mm rubber bullet. These actions “intentionally subjected him to deadly force,” his attorneys say.

The lawsuit, which includes claims for punitive damages, contains seven causes of action against all defendants:

Count I: Violation of First Amendment – Free Speech and Assembly

The following are Mr. Montano’s allegations only; there has been no determination of liability in this matter.

On the afternoon of May 30, 2020, Mr. Montano attended a demonstration at Pan Pacific Park in Los Angeles. The demonstration was organized in part by Black Lives Matter Los Angeles to peacefully protest ongoing police violence perpetuated against communities of color, particularly Black people, across the United States.

However, according to the complaint, this peaceful exercise of freedom of speech and assembly turned without warning into a violent nightmare due to the escalatory and dangerous crowd control tactics employed by the LAPD and the LASD.

Shortly after Mr. Montano arrived at Pan Pacific Park, he and others took to the city streets, occasionally stopping at intersections to take a knee and chant the names of George Floyd, Breonna Taylor, Ahmaud Arbery, and others needlessly killed at the hands of police, to protest in solidarity with others across the nation to denounce systemic racism and the history of violence against Black lives.

When Mr. Montano was positioned between North Curson Avenue and The Grove Dr./Stanley Avenue, a skirmish line of LAPD officers and LASD deputies formed at the intersection of Beverly Boulevard and The Grove Dr./Stanley Ave. LASD deputies were also positioned on the roof of a nearby building with conventional rifles and so called “less lethal munitions” (LLM) aimed at the group of demonstrators.

Mr. Montano observed more than 50 officers and deputies positioned close to the intersection. Law enforcement personnel wore full riot gear and brandished an array of LLMs and traditional firearms even though the protesters were unarmed.

Without warning or justification, LAPD officers and LASD deputies deployed tear gas into the crowd. Mr. Montano felt pain in his eyes, mouth, and nose from the tear gas, his eyes began to water, and he had difficulty seeing. He was able to treat the effects of teargas with liquid antacid and assisted fellow protesters affected by the gas by locating and applying milk.

The skirmish line of LAPD officers and LASD deputies began advancing on Mr. Montano and the group of demonstrators while continuously deploying tear gas canisters. Again without warning, the officers began firing rubber bullets and other LLMs at the crowd.

At no point did Mr. Montano hear LAPD officers or LASD deputies give him or other peaceful protesters an order to disperse or clear the streets. Mr. Montano remained kneeling at the intersection, approximately 30 feet from the skirmish line and – with his hands up – shouted along with other demonstrators “hands up, don’t shoot” and “I can’t breathe.”

On at least one occasion, Mr. Montano attempted to negotiate with the officers and deputies holding the skirmish line by positioning himself between the line and urging them to cease pointing firearms at demonstrators in an effort to ease tensions. Mr. Montano asked an unidentified commanding officer that the skirmish line not open fire so that he could take up position in the middle of the street to calm the protesters, and was informed by the apparent commanding officer that he was free to do so. 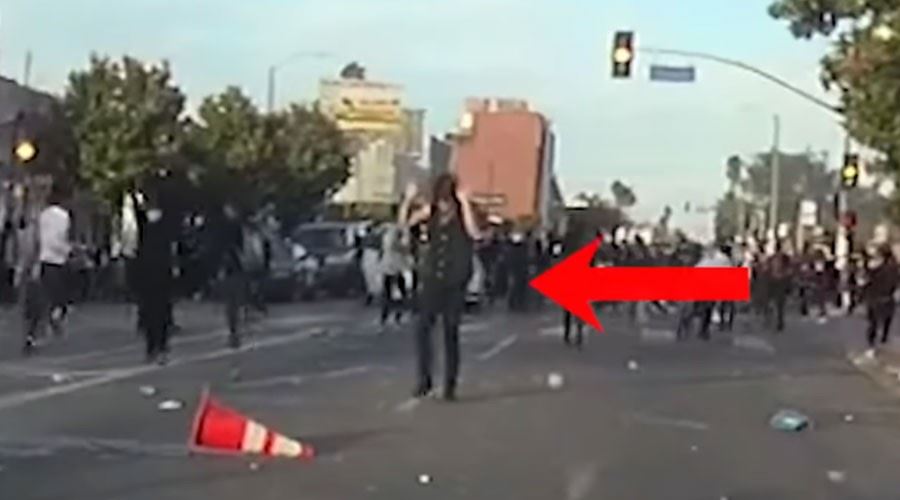 However, as Mr. Montano approached the group of protesters, he was fired upon and hit by sponge grenades discharged by the skirmish line of law enforcement. At the same time, LAPD and LASD officers aimed and fired their weapons at Mr. Montano, hitting him on the hip and stomach, with two rubber bullets.

Mr. Montano sought shelter behind a billboard located on the sidewalk to protect himself from further rubber bullets and other projectiles. After a couple of minutes, he re-emerged from this position with his hands up and positioned himself in the open, backing away from the officers to keep his distance. LAPD video released to the public on July 31, 2020 shows an LAPD officer firing beanbag rounds and then a 40 mm rubber bullet, apparently aimed at Mr. Montano, which struck him on the front, left side of his head. Upon impact, he grabbed his head and fell backward, injuring his tailbone.

After being struck in the head by the rubber bullet, Mr. Montano was immediately incapacitated, started bleeding profusely, lost all vision in his left eye, felt ringing in his ears, and pain radiating throughout his head. While he was on the ground, LAPD officers and LASD deputies continued to fire projectiles and tear gas into the crowd. Some demonstrators rushed to assist Mr. Montano and led him out of the street, applied gauze, and wrapped his head wound while other demonstrators attempted to call for emergency services. They were unable to place outgoing calls, reportedly due to law enforcement transmitting “scrambler” signals to interrupt communication amongst protesters. As a result, demonstrators were forced to carry Mr. Montano away from the area. He was eventually placed in an individual’s vehicle and taken to Cedars-Sinai Hospital. 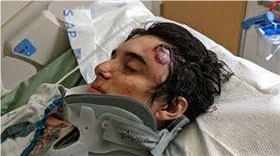 Mr. Montano received emergency medical treatment in the Intensive Care Unit (ICU) where attending medical personnel were finally able to stop the bleeding in his head. Mr. Montano received seven or eight staples in his forehead and hospital staff reported that his skull was visible beneath the skin that was punctured by the rubber bullet.

A CT scan revealed that Mr. Montano had sustained a traumatic brain injury (TBI) and that he was at risk of seizures and serious infection. In total, Mr. Montano stayed at Cedars Sinai for four days, two of which were spent in the ICU. He continues to deal with a variety of issues, including hearing loss, recurrent dizziness, nausea, mental confusion and inability to comprehend social cues, significantly reduced proficiency in understanding written and spoken language, is easily disturbed when hearing music (which causes great distress given that he is currently enrolled as a music student at the Los Angeles Recording School), and suffers from emotional distress.

“It is abundantly clear to anyone who watches the video that our client, hands raised and posing no threat to anyone, was intentionally subjected to deadly force when officers shot him in the head with rubber bullets,” says attorney Pedram Esfandiary. “Our firm intends to hold the agencies and the officers involved accountable for the damage they have caused.”

“LAPD has a long and troubled history of employing unlawful suppression tactics in response to protests,” says attorney Monique Alarcon. “The militarized culture of the LAPD and LASD has fostered conditions that prioritize violence over peaceful de-escalation, invariably leading to situations like this one, which resulted in life-threatening injuries to our client.”

An LAPD order on the “Use of Less Lethal Weapons” (a deceptively monikered group of arms utilized by law enforcement) states that LLMs “may be deployed on aggressive and/or combative suspects [emphasis added] in a crowd control situation, on suspects who are a potential physical threat [emphasis added] to themselves or others, or suspects displaying ‘aggressive’ and/or ‘combative’ actions.”

The order further states that LLMs “should not be used against a person or a crowd that is retreating [emphasis added] unless the person or crowd continues to engage in unlawful activity that is aggressive and/or combative. Where feasible, notice should be given to the crowd before less lethal weapons are deployed [emphasis added] in a crowd control or dispersal situation, and where feasible, it should be given in the language(s) spoken by those assembled.

Mr. Montano’s lawsuit alleges none of the conditions authorizing the use of LLMs in the LAPD order existed when he was struck and injured by rubber bullets. In stark contrast to being “aggressive”, “combative” or posing a “physical threat” to himself or others, Mr. Montano remained peaceable while participating in the demonstration and, unarmed, had his hands up while walking backwards – a clear and unequivocal sign of non-threat – when he was assaulted and battered by LLMs. “He is isolated in that intersection. His arms are up in the air,” stated Timothy Loranger, an attorney for Mr. Montano. “There’s no good argument that he was hit accidentally.”

According to the allegations, the defendants authorized and executed the unlawful deployment of LLMs with malice and with the specific intent to injure, debilitate, and incapacitate Mr. Montano. The defendants’ conduct toward Mr. Montano showed a reckless disregard for human life, oppression, and malice, making them liable for punitive damages.

It is also important to note that the LAPD enrolled some 600 LAPD personnel in “special training” called “Killology,” a neologism coined by former Army Ranger Dave Grossman to describe “the scholarly study of the destructive act.” Grossman “trains” law enforcement personnel across the country on how to be more effective killers and advocates a “warrior” mentality that does not hesitate to use deadly force or regret its consequences.

LAPD’s use of force against peaceful demonstrators is not used as a last-measure recourse in the midst of civil unrest, but is a deliberate, first-line tactic which is embedded in the institutional culture perpetuated by LAPD, The City of Los Angeles and The Los Angeles Sheriff’s Department, which maintain a Militarized Culture of Policing, according to the allegations.

The national law firm of Baum Hedlund Aristei & Goldman has represented over 20,000 clients across the country in personal injury and wrongful death claims. Across all areas of practice, the firm has won more than $4 billion in verdicts and settlements on behalf of clients.