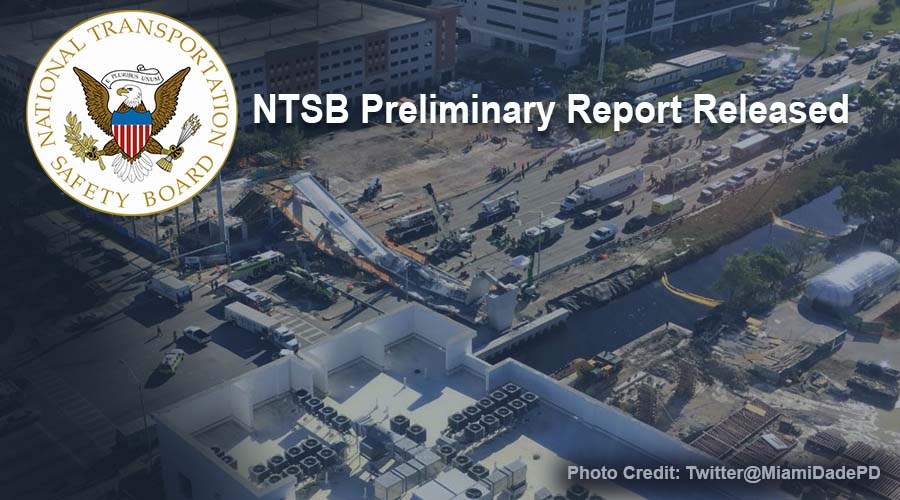 The National Transportation Safety Board (NTSB) released a preliminary report on the March 15, 2018 Florida International University (FIU) bridge collapse after a little more than two months of initial investigation into the incident.

It will be some time before the agency issues a full report on the FIU collapse, but the families of some victims are pushing for the release of more documents related to the collapse. The Miami Herald has joined in that fight and is in court against the Florida Department of Transportation (FDOT) arguing that, despite the ongoing NTSB investigation, the documents should be available to the public.

In the preliminary report, the NTSB recounts details from the deadly bridge collapse, which killed one bridge worker and five individuals who were inside vehicles below the structure (as well as injuring four more bridge workers and four other motorists). The agency notes the bridge was built using an accelerated construction method that was in place to minimize traffic disruption traffic. On March 15, 2018, at approximately 1:47 p.m. the bridge experienced a structural failure and fell about 18.5 feet onto the street below, fully or partially crushing eight vehicles (seven of which were occupied).

The new FIU pedestrian bridge was built in a lot adjacent to the street it would eventually cross and had been moved into place using transporters on March 10, 2018, just five days before the collapse. Even then, however, there were cracks in the structure, and the preliminary report features photographs the NTSB obtained of those cracks.

Officials found cracks in both the south and north end of the bridge and the photographs show the cracks in the north end—where the collapse appeared to initiate—as far back as February 24, 2018.

At the end of the short, four-page report on the FIU bridge collapse, the NTSB says that in the coming month, they will conduct “additional forensic examination of several bridge structural components and destructive testing of multiple core and steel samples.”

The agency also clarifies that all aspects of the collapse are still under investigation and that it has not determined a probable cause.

Florida Bridge Came Down Days After Call About Cracks

Denney Pate was the chief engineer for FIGG and was one of two contractors involved in designing and building the bridge. He made headlines shortly after the FIU bridge collapse because of a voicemail he’d left for an FDOT official on March 13, 2018—just two days before the collapse.

In the voicemail Pate says they have observed some cracking in the bridge, and that “obviously some repairs or whatever will have to be done.” He also says that, from a safety perspective, they do not see an issue.

The Miami Herald reports that FIU officials met with bridge engineers and officials from FDOT for two-hours the very morning of the pedestrian bridge collapse, and a topic of discussion was the cracks, and what safety risk they presented. The Herald hasn’t received access to the records from that meeting due to legal restrictions from the NTSB investigation.

FDOT in Legal Battle with Miami Herald Over Release of Documents

The Herald has taken their quest for documents related to the FIU bridge collapse to court in the hope of making progress with FDOT and gaining access to information such as meeting minutes and e-mails. The news publication believes that the documents should be available under the Florida public records law.

The Florida Department of Transportation, for their part, has said that while the records are public documents, state law is negated by a federal law that prevents documents tied to NTSB investigations from being released to the public and media.

National Transportation Safety Board officials have ordered FDOT not to release documents related to the bridge and collapse from February 19, 2018, despite the actual collapse being nearly a month later. A legal representative for the Herald argued that while the federal law applies to documents that originate because of the NTSB investigation, it is not relevant to documents that already existed before the event and subsequent investigation took place.

The Florida Department of Transportation asked Leon County Circuit Court Judge John Cooper to dismiss the Herald‘s lawsuit, but Cooper refused and said that federal investigators with the NTSB had two weeks to choose whether they want to defend themselves before his ruling.

Full FIU Bridge Collapse Report May Be Years Away

The preliminary report may only have taken a couple of months, but NTSB officials say it will be a year or two before the full report is available. That length of time is not uncommon for such investigations by the agency, but victims and the families of victims will likely push for more details and assessments from independent experts as they wait for answers.

So far many of those experts seem to believe that the pedestrian bridge had crucial flaws that could likely have led to its fast collapse.