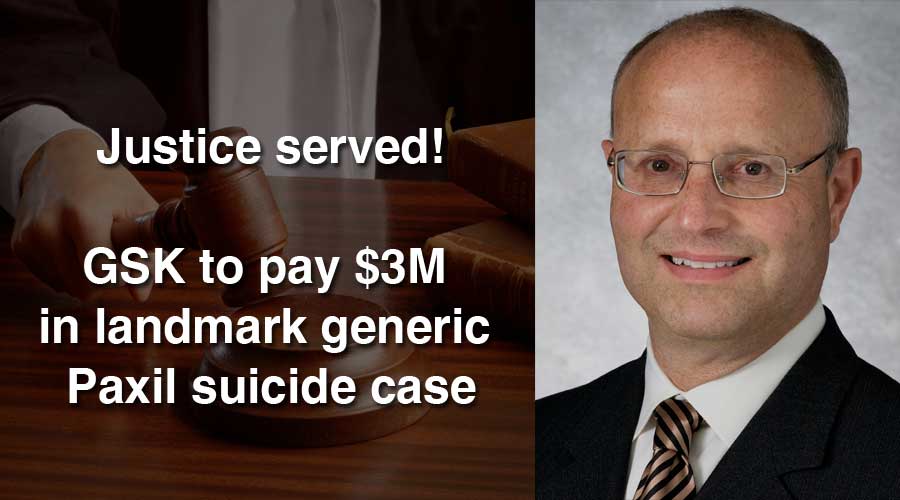 April 20, 2017, Chicago, Illinois –– A federal jury has sided with the widow of a deceased Chicago attorney in her generic Paxil suicide lawsuit against GlaxoSmithKline (GSK), ordering the pharmaceutical giant to pay $3 million.

The jury verdict resolves allegations in the trial of Dolin v. Smithkline Beecham Corp. (D/B/A GlaxoSmithKline-GSK) over the paroxetine-induced wrongful death of Wendy Dolin’s late husband, Stewart Dolin, who was a partner at the Chicago law firm Reed Smith when he took his own life in 2010.

“We are very pleased with the jury’s verdict and are grateful for their diligent service,” said Brent Wisner, co-lead trial counsel for Ms. Dolin in the Paxil suicide case. “We feel justice has been served, and are hopeful this verdict will result in a labeling change to warn that people of all ages are at risk. This should send a clear message to GSK and other drug manufacturers that hiding data and manipulating science will not be tolerated. Brand drug manufacturers have the ability and responsibility to make their drug labels accurate. If you create a drug and know that it poses serious risks, regardless of whether consumers use the brand name or generic version of that drug, you have a duty to warn.”

On July 10, 2010, 57-year-old Stewart Dolin began taking the prescription antidepressant medication paroxetine. The brand name version of this medication is called Paxil, which was researched, developed, manufactured and marketed by GSK. Paroxetine and Paxil are the same chemical compound and both use the same product information labeling. GSK created and was responsible for maintaining the accuracy of the Paxil label.

In the early afternoon on July 15, 2010, Stewart Dolin died when he was struck by a CTA Blue-Line train in the subway station near Washington Street in Chicago. Just before this, a nurse at the subway station who did not know Mr. Dolin noticed him pacing back and forth while looking in the direction of an approaching train that was not yet in sight. When the moving train appeared, the nurse observed Mr. Dolin leap in front of the train, where he was struck. Mr. Dolin was pronounced dead from the injuries he suffered due to the collision and his contact with the electrified track after the collision.

The lawsuit alleged GSK failed to adequately warn Mr. Dolin’s doctor about Paxil/paroxetine’s association with an increased risk of suicidal behavior in adults of all ages. The Court previously ruled that, although GSK did not manufacture the pills Mr. Dolin ingested, the company was responsible for the label and knew or should have known any failure to warn would result in harm to those taking generic versions of the drug.

“Glaxo has known for two decades that Paxil can cause people of all ages to commit suicide. The company not only hid the risk, but stuck its head in the sand and ignored countless suicides that occurred in its clinical trials,” said attorney Michael Baum, who also represented Ms. Dolin. He added that the drug’s Black Box warning – which states there is a suicide risk for children, adolescents and young adults, but the risk ends at age 24 – is “just wrong.”

During the five-week trial, GSK swore off its responsibility for ensuring the truthfulness of the label, arguing that, because the FDA never made GSK warn of a suicide risk, the company should be exonerated. According to Mr. Baum, this argument is “akin to a car speeding past a cop, the cop doesn’t stop the car, and the car crashes into another car and kills someone—the driver who killed someone cannot state it’s not his fault because the cop didn’t stop them.”

In the end, the jury disagreed with GSK’s arguments, finding that the drug maker cannot sluff off its responsibility for its labeling just because the FDA let the company get away with it.

For more information about the trial, visit Paxil Injuries or MISSD.co