On Monday, August 20, 2012, a California state court judge ruled in favor of a California resident, represented by Baum Hedlund Aristei & Goldman, allowing her lawsuit against Medtronic Sofamor Danek USA, Inc. and Medtronic, Inc. (collectively “Medtronic”) to move forward. (The Judge previously issued a tentative ruling on Friday, August 17, 2012, but made it official at a hearing on Monday.) 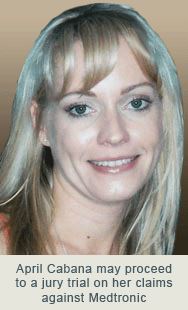 Plaintiff, April Cabana, of Alta Loma, originally sued Medtronic, in addition to Stryker Biotech, her doctor, and Pomona Valley Hospital Medical Center, on July 13, 2011, after two different medical devices implanted during two different back surgeries resulted in debilitating and permanent injuries to her spine. (Her doctor and the hospital were officially added to the complaint on October 11, 2011.)

The Honorable Michael P. Linfield of the Los Angeles Superior Court held that Ms. Cabana may proceed to a jury trial on her claims against Medtronic. (Ms. Cabana’s claims against Stryker, the doctor, and Pomona are also still currently on track for a jury trial.) Medtronic had hoped to get its portion of the case thrown out when it filed a Motion for Summary Judgment in December of 2011.

This is believed to be the first decision in the country to address the INFUSE preemption issue on a summary judgment motion.

The central issue of this particular legal matter was whether federal law preempts products liability claims against manufacturers of a medical device (giving them immunity) where the patient claims she was harmed as a result of the manufacturer’s illegal promotion of the medical device for uses not approved by the FDA.

In rejecting Medtronic’s preemption (immunity) arguments, the Court held that preemption did not apply because “plaintiff’s claim is not based on allegations that Medtronic’s device violated state tort law notwithstanding compliance with the relevant federal requirements.  In contrast, the plaintiff here is alleging that Medtronic promoted the use of its device in violation of federal requirements. Accordingly, Riegel is not authority that the plaintiff’s claims against Medtronic are preempted here.”  See Court Ruling at 4-5.

With respect to Medtronic’s implied preemption arguments premised on Buckman, the Court held that “Buckman is inapposite (not pertinent or appropriate) to plaintiff’s claims as plaintiff has not brought a claim for ‘fraud-on-the-FDA’ against Medtronic.”  See Court Ruling at 6.  Plaintiff submitted evidence supporting her allegations that, in violation of federal law and FDA regulations, Medtronic utilized highly paid consultants to train physicians (including the plaintiff’s physician) in utilizing INFUSE for non-FDA approved “off-label” uses.

In reacting to the Court’s ruling, the plaintiff’s counsel, Bijan Esfandiari, stated that “we and our client are pleased with the Court’s thoughtful, well reasoned, opinion and ruling, rejecting Medtronic’s baseless immunity arguments. The Court’s ruling confirms that medical device manufacturers who violate federal law and promote their devices for non-approved surgeries should be  held accountable for any injuries innocent patients suffer as a result of such non-approved surgeries.”  Mr. Esfandiari further added that “through its arguments, Medtronic sought to create a world wherein it is permitted to violate the law and harm patients, but then be immune from all liability and responsibility.”

Ms. Cabana eventually had to undergo a second surgery to remove the excessive bone growth allegedly caused by Stryker’s medical device, implanted during the first surgery. In the second surgery, Ms. Cabana’s surgeon removed the “bone of unknown origin” and, in order to fuse the bone, the surgeon used INFUSE Bone Graft manufactured by Medtronic.

The lawsuit further alleges that Medtronic’s Infuse Bone Graft Device had only been approved for a limited surgical procedure, yet Medtronic illegally promoted it for a number of off-label procedures. The surgeon used the Infuse Bone Graft in an off-label manner and the surgery failed to remedy Ms. Cabana’s condition and exacerbated her pain. As a result of the untested, unapproved, and off-label use of materials during her two surgeries, her condition and pain has worsened and necessitated additional surgery and medical attention.

In July of 2012, Ms. Cabana’s lawyers discovered that her doctor and Pomona Valley Hospital apparently performed her first surgery, in which the Stryker medical device was implanted, as part of an illegal human experiment without her consent. The documents obtained by her lawyers show that 16 other patients were part of this experiment.