The Gardasil lawyers at Baum Hedlund Aristei & Goldman represent numerous young men and women who were diagnosed with dysautonomia and other autoimmune disorders after receiving the human papillomavirus (HPV) vaccine. Our Gardasil lawsuits allege Merck concealed, and continues to conceal, the truth about its HPV vaccine from consumers, including the fact that studies have linked Gardasil to harmful side effects, including dysautonomia.

For many people, the signs and symptoms of dysautonomia do not always point to a straightforward diagnosis. Finding the right medical treatment to help alleviate those symptoms can be frustrating and difficult as well. It is our hope that this blog will become a resource for people who may be suffering from side effects like dysautonomia after receiving the Gardasil vaccine.

Dysautonomia is an overarching term that describes numerous medical ailments that cause dysfunction to the Autonomic Nervous System, which controls involuntary bodily functions, including:

Those who suffer from different forms of dysautonomia are unable to properly regulate these bodily systems, which often results in:

Dysautonomia is a condition affecting millions across the world. Genetic (pediatric) dysautonomia is rare. In teens and adults, dysautonomia is believed to be secondary to certain medications and vaccines, head and spinal cord injuries, cancer treatments, and diabetes. People of all demographics are affected by these conditions. Unfortunately, there is currently no cure for dysautonomia, and most patients suffer for months, if not years before they receive a dysautonomia diagnosis. This is mainly due to a lack of public and professional medical awareness.

Some of the most common forms of dysautonomia include:

Those who suffer from dysautonomia have a wide range of symptoms based on the type of autonomic dysfunction and where it occurs in the body. Dysautonomias impact several organ systems, and the symptoms vary significantly between different patients.

For instance, one person with POTS may primarily experience abdominal pain, while another could frequently suffer from migraine headaches.

Some of the most common symptoms associated with dysautonomia conditions include: 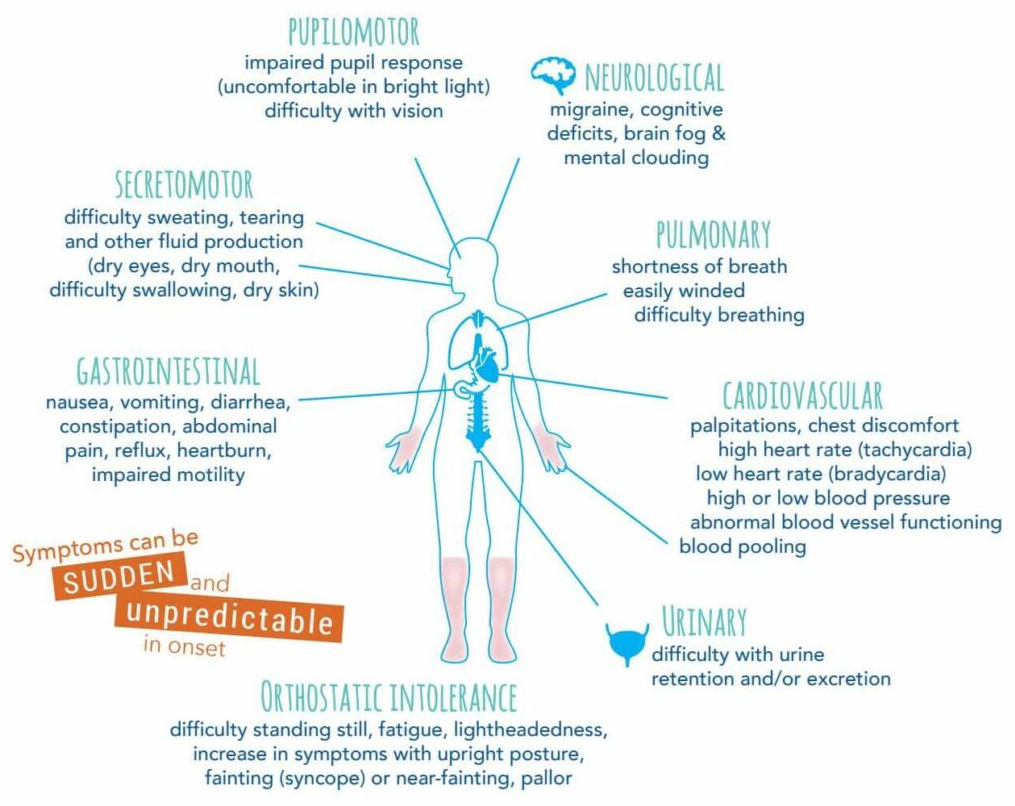 Image obtained from The Dysautonomia Project.

Gardasil has been marketed as a “cervical cancer vaccine” that aims to stop up to nine of the hundreds of strains of the human papillomavirus (HPV). The manufacturer of Gardasil, Merck, has been accused of fast-tracking the vaccine using the United States Food and Drug Administration (FDA) approval process and deceitfully carrying out the clinical trials for Gardasil to hide significant side effects and overstate the vaccine’s effectiveness.

After careful review, medical experts have discovered that the mixture of adjuvants combined in Gardasil is accountable for post-vaccination-induced autoimmune diseases in particular patients, including dysautonomia.

The authors of the study, Benefits and Harms of the Human Papillomavirus (HPV) Vaccines: Systemic Review with Meta-Analyses of Trial Data from Clinical Study Reports, 9 Systematic Reviews 43 (February 2020), found that “HPV vaccines increased serious nervous disorders,” and were connected to a nearly two-fold increased risk of POTS.

Lawsuits allege that Gardasil is associated with dysautonomia and other autoimmune conditions as a result of the vaccine containing a number of dangerous ingredients, including at least one that Merck neglected to disclose to regulators and the public. These ingredients include the following:

The amount of scientific research that links Gardasil to autoimmune diseases such as dysautonomia, POTS, OI, and others continues to grow. Below, you will find several studies that have found a connection between Gardasil and autoimmune conditions:

How is Dysautonomia Diagnosed?

Although doctors try various methods to diagnose dysautonomia, there is really no single test to diagnose it. As with most autoimmune diseases, dysautonomia is often initially misdiagnosed and misunderstood. It sometimes takes years to get a formal diagnosis and requires examination by various specialists.

How is Dysautonomia Treated?

While there is no cure for dysautonomia, it may be treated. Treatment is primarily focused on managing the symptoms, such as dizziness and fainting.

A very expensive and time-consuming therapy known as intravenous immunoglobulin (IVIg) therapy has proven to be an effective treatment for people who suffer from dysautonomia and other antibody deficiencies. Some of our clients that have received this treatment are able to walk again, but they must maintain the IVIg sessions on a regular basis.

The following are some resources to help you gain a better understanding of dysautonomia:

Gardasil Lawsuit for People Suffering from Dysautonomia After HPV Vaccine

If you or your child were diagnosed with dysautonomia after receiving the Gardasil HPV vaccine, you may be able to pursue justice and compensation in a lawsuit against Merck. The Gardasil lawyer team at Baum Hedlund Aristei & Goldman represents hundreds of young women and men (Gardasil is also given to boys) throughout the U.S. who suffer from dysautonomia and other autoimmune diseases after receiving the HPV vaccine.

Contact our office by calling (855) 948-5098 or submitting an online contact form today to schedule your free consultation with one of our skilled Gardasil lawsuit attorneys.