Published in Elsevier’s Science Direct on May 24, 2021 and in print in the September issue of Elsevier’s Research Policy journal issue 50, the authors analyzed and cited numerous declassified court documents from the Monsanto Roundup litigation as evidence that “[s]cientific misconduct by private firms threatens the integrity of public science and the public's trust in science.” The litigation alleges Monsanto’s Roundup weed killer and its active ingredient, glyphosate, causes non-Hodgkin’s lymphoma and that Monsanto failed to warn of this severe health hazard.

Court documents from the litigation, which became known as ‘The Monsanto Papers,’ captured worldwide attention because they allowed people to see what happens “behind the curtain” of corporate secrecy.

After reviewing the trove of court documents, the paper authors concluded that, among other things: 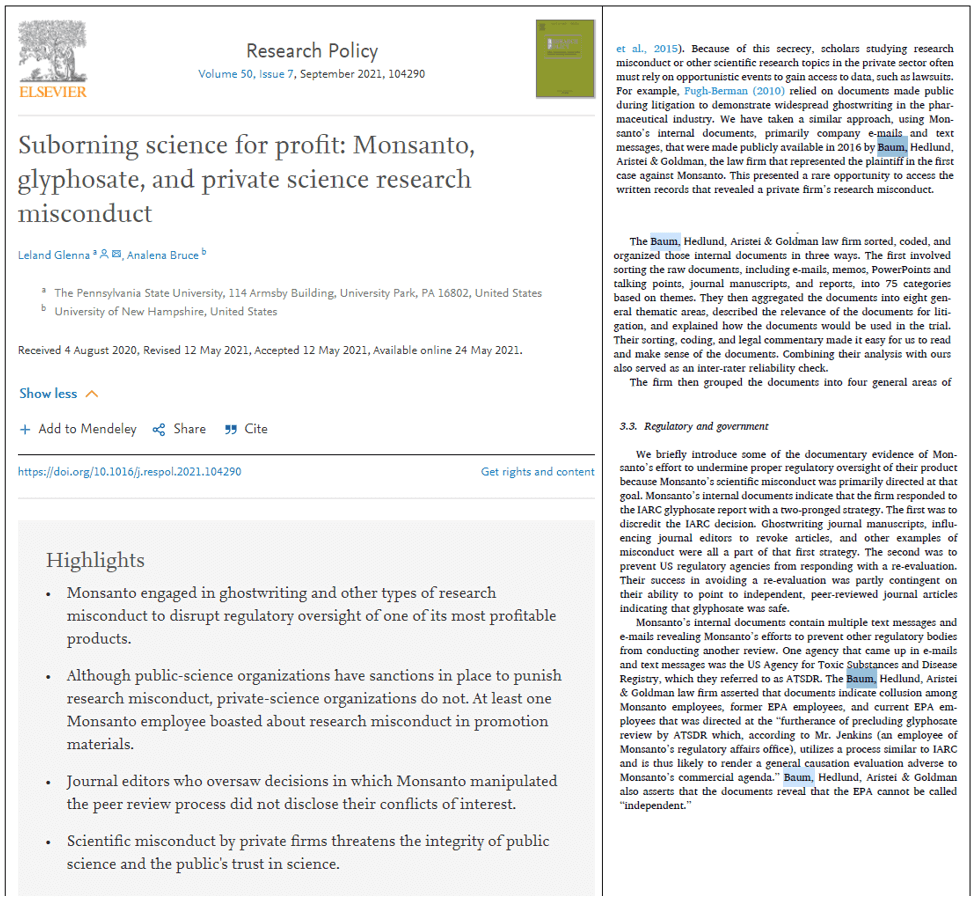 The Law Firm That Went Public with the Monsanto Papers

In 2020, Bayer AG, the multinational corporation that acquired Monsanto, announced a massive $10.9 billion settlement with several law firms to resolve tens of thousands of Roundup cancer lawsuits. The settlement announcement came after three consecutive trial losses for Monsanto in which the juries awarded the plaintiffs $2.4 billion in total damages.

Baum Hedlund Aristei & Goldman was the only law firm in America to serve on the trial teams in all three cases. The firm’s vice president and senior shareholder, R. Brent Wisner, was co-lead trial counsel in two of the cases (for Dewayne “Lee” Johnson and Alva and Alberta Pilliod), delivering the opening and closing statements, and cross-examining many of Monsanto’s corporate witnesses.

But the firm’s role as a leader in the Monsanto litigation goes beyond verdicts and settlements. Starting in 2016, Baum Hedlund attorneys began meticulously cataloging internal Monsanto emails, text messages, reports, studies, and other memoranda supporting the plaintiffs’ pending lawsuits against the agrichemical giant. On numerous occasions during the litigation, the firm fought to de-designate documents marked as “confidential” that did not actually contain proprietary information or “trade secrets.” Once Monsanto finally conceded, waived, or lost confidentiality over the documents, Baum Hedlund made them public.

“We get these really incredible documents that affect people’s public health, and we make a point to get them unsealed,” R. Brent Wisner said in a recent interview with Super Lawyers. “Most lawyers don’t bother or care to do that because it doesn’t really affect the case, but for us it’s a greater good kind of thing.”

Baum Hedlund sent these court documents—later dubbed ‘The Monsanto Papers’—to regulatory agencies, scientists, academics, reporters, consumer advocates, and others around the world. The New York Times, the Wall Street Journal, Le Monde, and many other major news agencies reported on the important issues raised in the documents.

The authors of ‘Suborning Science for Profit: Monsanto, Glyphosate, and Private Science Research Misconduct’ acknowledged Baum Hedlund’s efforts in publishing the Monsanto Papers throughout the paper:

The Baum, Hedlund, Aristei & Goldman law firm sorted, coded, and organized those internal documents in three ways. The first involved sorting the raw documents, including e-mails, memos, PowerPoints and talking points, journal manuscripts, and reports, into 75 categories based on themes. They then aggregated the documents into eight general thematic areas, described the relevance of the documents for litigation, and explained how the documents would be used in the trial. Their sorting, coding, and legal commentary made it easy for us to read and make sense of the documents. Combining their analysis with ours also served as an inter-rater reliability check.

Paper authors Leland Glenna from Pennsylvania State University and Analena Bruce from the University of New Hampshire used the Monsanto Papers to highlight Monsanto’s efforts to “distort the scientific peer-review process through ghostwriting, to orchestrate campaigns to retract journal articles, and to influence editorial decisions.”

Monsanto’s scientific misconduct was primarily directed at two goals: to discredit the International Agency for Research on Cancer’s (IARC) report on glyphosate, which concluded the chemical is a probable human carcinogen, and to prevent regulatory agencies from responding to the IARC report by re-evaluating glyphosate.

The paper focused on the following major themes highlighted in Baum Hedlund’s publishing of the Monsanto Papers:

According to the authors, several Monsanto Papers documents show that Monsanto engaged in multiple cases of scientific misconduct, including ghostwriting.

“Monsanto executives orchestrated a series of ghostwritten manuscripts to build up the scientific record that could later be used to convince regulatory overseers to dismiss the IARC report,” the paper authors say. “They openly used the term ‘ghost writers’ in their e-mail exchanges. Employees boasted about misconduct in their performance evaluations.”

In one example cited in the paper, Monsanto executive William Heydens admits to ghostwriting the introductory chapter of an “independent” expert panel report. In the email, Heydens makes it clear that he does not want to be listed as an author; a Monsanto employee author would undermine the credibility of the expert panel because it would no longer be seen as “independent.”

In another email chain, Professor John Acquavella (a former Monsanto employee) says: “You guys know me. I can’t be a part of deceptive authorship on a presentation or publication. Please note the ICJME guidelines below that everyone goes by to determine what is honest/ethical regarding authorship.” Acquavella was protesting his name not being included as an author of an independent panel review. Heydens did not want to include him as a review author because his previous employment at Monsanto would undermine the “independence” of the review panel.

Heydens wrote to Acquavella: “I thought we discussed previously that it was decided by our management that we would not be able to use you or Larry as Panelists/authors because of your prior employment at Monsanto-was that not your understanding?

Acquavella responded: “I didn’t realize that Bill. Also, I don’t think that will be okay with my panelists. We call that ghost writing and it is unethical.”

Ghostwriting was not the only scientific manipulation cited in the paper. Monsanto, the authors note, also distorted the peer review process for glyphosate research through efforts to influence journal editors.

One example of this was Monsanto’s effort to retract a study from G. E. Seralini, a professor, author, international researcher and world expert for GMOs and pesticides risks, that found a link between Monsanto’s Roundup Ready maize and liver and kidney tumors in rats. In an internal Monsanto performance review of employee David Saltmiras, Saltmiras boasted about his role in working with Wallace Hayes, the editor of the journal Food and Chemical Toxicology, which published the Seralini study.

Specifically, Saltmiras notes in the performance review that he convinced scientists to write letters to the editor to call for the retraction of Seralini’s paper. Saltmiras also asserted:

“Throughout the late 2012 Seralini rat cancer publication and media campaign, I leveraged my relationship with the Editor in Chief of the publishing journal, Food and Chemical Toxicology, and was the single point of contact between Monsanto and the Journal.”

Saltmiras then proclaims that he “[s]uccessfully facilitated numerous third-party expert letters to the editor which were subsequently published, reflecting the numerous significant deficiencies, poor study design, biased reporting and selective statistics employed by Seralini.” David Saltmiras’s comments in his performance review reveal a contrast between public science and private science.

Food and Chemical Toxicology retracted the Seralini study. Per the paper, Wally Hayes received a substantial consulting contract from Monsanto prior to the Seralini retraction. The paper authors noted that it was “striking that Hayes did not indicate that he had worked as a consultant for Monsanto in his official statement regarding the retraction of the Seralini article. Food and Chemical Toxicology has strict guidelines about authors disclosing conflicts of interest. Those guidelines do not seem to apply to their editors.”

The authors assert that, based on the documents, Monsanto used its relationships with scientific journals to advance the company’s interests:

“If university scientists boasted in their performance evaluations that they had engaged in research misconduct, they would be disciplined and possibly even fired. In this private-science context, however, research misconduct is listed positively.”

Ghostwriting, disruption of the peer review process, and retraction efforts had great effect on glyphosate regulation. According to the paper, Monsanto’s ghostwriting created a collection of seemingly independent journal publications and reports that touted glyphosate’s safety. Regulators relied on these “independent” journal publications to evaluate glyphosate and did not consider studies that Monsanto worked to retract. According to the authors, Monsanto’s research misconduct “did not just affect a handful of journals or a few regulatory officials. It had ripple effects throughout the scientific peer-review process.”

The authors conclude the paper by noting:

“[T]he public trusts science less when the private sector is involved in funding or conducting the research. Our analysis indicates that the public is wise to be skeptical of private science.”

The national law firm of Baum Hedlund Aristei & Goldman successfully resolved thousands of cases in the Monsanto Roundup litigation. The only firm in the country to serve on the trial teams in all three cases that went before juries, the firm has earned a reputation for holding Fortune 500 companies accountable and breaking new legal ground. Since opening its doors in 1973, the firm has won more than $4 billion in verdicts and settlements on behalf of clients. At this time, the firm is no longer accepting Roundup NHL cases. Additionally, nothing in this statement is intended to promote or encourage further litigation against Monsanto related to Roundup and NHL.