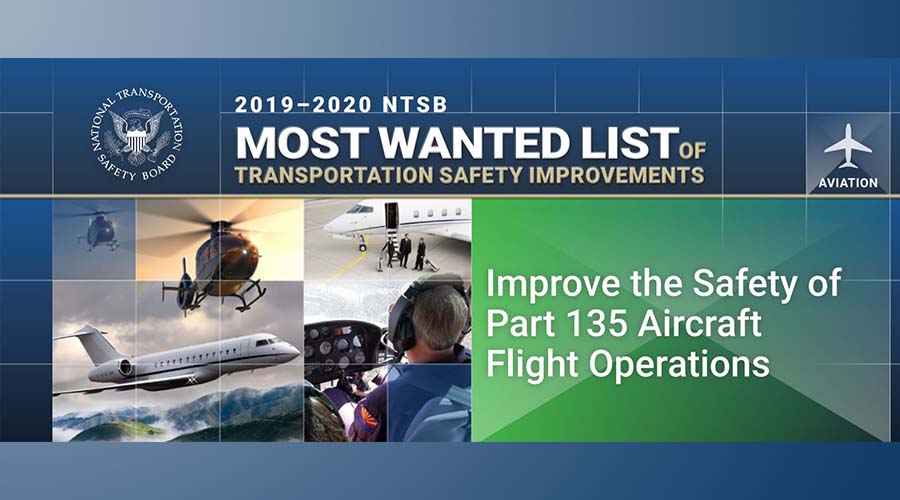 The National Transportation Safety Board (NTSB) has issued its list of most-wanted safety improvements for 2019-2020. The list, which covers enhancements in aviation, railroad, boating, and automobile transportation, acts as the NTSB’s advocacy tool to push for safety enhancements and prevent fatal crashes.

Among the items on the list that affect aviation are eliminating distractions, ending alcohol and other drug impairment, and improving the safety of Part 135 aircraft flight operations. Each year's safety improvements list can be a guideline for ways that companies and airlines can eliminate or reduce their number of dangerous aviation accidents.

Included in the NTSB’s list of most-wanted safety improvements is requiring Part 135 aircraft flight operations to be held to stricter safety standards than they are currently held to, which are less stringent than the standards for commercial airlines. The NTSB also takes small aircraft operators—which include air medical services, air taxis, and charter and on-demand flights—to task for not taking the initiative on their own to improve safety for their passengers and crew.

For example, Part 135 operations are not required to have a safety management system (SMS), flight data monitoring (FDM), or controlled flight into terrain (CFIT) avoidance training. Such programs are used to ensure operators focus on safety management and implement adequate policies, practices, and procedures to ensure crew and passengers are kept safe. Despite the Federal Aviation Administration (FAA) not requiring Part 135 operators to have such programs, there is nothing to prevent operators from implementing such programs on their own. Currently, Part 135 helicopter operations are required to have controlled flight into terrain avoidance training programs, but their fixed-wing counterparts are not.

“Despite the availability of SMS, FDM, and CFIT-avoidance programs, preventable crashes involving Part 135 aircraft are occurring all too frequently, like the November 10, 2015, fatal accident in Akron, Ohio, involving a British Aerospace HS 125-700A,” the NTSB writes. “Our investigation identified a lack of compliance with standard operating procedures that could have been mitigated with an SMS.”

In its report, the NTSB urges operators to be proactive about safety measures, rather than waiting for either regulations or an accident to motivate change. According to the agency, those Part 135 operators who have implemented SMS, FDM, and CFIT-avoidance programs have seen improvements in their safety.

Eliminating Distractions for Pilots and Crew

In its Most Wanted List of Transportation Safety Improvements, the NTSB noted that distraction is a growing problem in all modes of transportation, including aviation. Thanks to the increasing use of personal electronic devices—such as cellphones—pilots and flight crew are at an increased risk of distraction even while in the cockpit.

In making its recommendations, the NTSB asks regulators to ban non-operational personal electronic device use in all Part 135 and Part 91 (general aviation) aircraft.

Much of the fatigue-related focus in aviation is on commercial airline pilots, but as the NTSB points out, many people who work in safety-sensitive aviation jobs, as well as general aviation pilots who don’t have hours-of-service regulations, can also cause accidents due to a lack of sleep. Pilots, mechanics, and air traffic controllers all have roles that require complete attention, which can be affected by issues with sleep.

Even in cases where such workers get enough rest, sleep disturbances—such as apnea—could prevent the person from having a restful sleep, which also impairs work performance. The NTSB recommends industry stakeholders develop fatigue risk management programs and training programs to address issues related to human error.

End Alcohol and Other Drug Impairment for Pilots

The NTSB writes that most fatal aviation accidents linked to drug use occur in general aviation, and the use of drugs is reportedly increasing. A 2014 study called Drug Use Trends in Aviation: Assessing the Risk of Pilot Impairment conducted by the NTSB found that while in 1990 the rate of pilots with at least one positive drug finding was less than 10 percent, in 2011 that rate was up to 40 percent. Illicit drug use appeared in only a fraction of cases. The primary drug found in fatal aviation crashes was a sedating-antihistamine that can be found in over the counter allergy medications.

In addition to strengthening rules regarding seat belts, shoulder harnesses, and child safety restraint systems, the NTSB writes that inadequate evacuation procedures and lack of aircraft crashworthiness—such as fuel tanks that explode and cause a fatal fire after a survivable crash—also cause too many fatalities. The NTSB calls on regulators to remove exemptions allowing children to sit on an adult's lap during commercial flights, require all general aviation airplanes to be equipped with shoulder harnesses, and issue special bulletins about modifications that improve aircraft fuel system crashworthiness.