A fatal collision between a semi-truck and a pickup truck in Ventura left the driver of the semi trapped behind the wheel and the driver of the pickup dead. Such crashes are not unusual in California, where numerous fatal truck accidents occur weekly, often with the drivers of the tractor trailers being significantly less harmed than those in passenger vehicles.

October 19, 2017
Investigations continue into an accident involving a semi, a pickup truck, and a sedan in Ventura. The incident took place a little before 7:00 a.m., according to California Highway Patrol (CHP), on Highway 126 near Kimball Road.

Authorities believe that the unidentified 57-year-old woman driving the sedan, moved into the center median to pass the pickup truck that was involved in the accident. CHP said that the woman then lost control of her car, likely because of the median’s change from asphalt to gravel, and collided with the pickup. 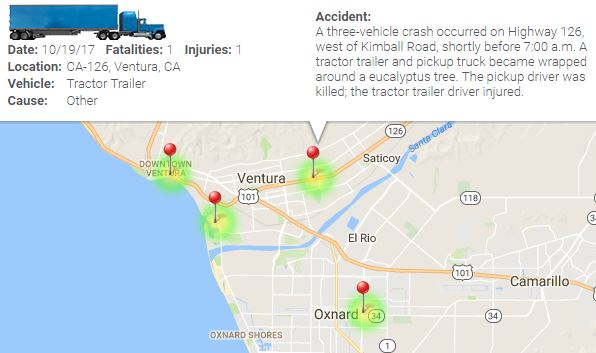 Fifty-seven-year-old John Freeman, a Ventura man, was operating the pickup, and the force of the collision caused him to swerve in front of the semi-truck, which was traveling in the far right lane. Both the pickup and the semi veered off the road and came to a rest with the tractor-trailer pinning the pickup against a tree.

Emergency personnel from the City of Ventura Fire Department were the first to arrive at the scene, where they found the driver of the semi-truck (an unidentified 64-year-old Ventura man) trapped inside the big rig’s cab. Hydraulic tools were necessary to free the man, who was then taken to Ventura County Medical Center, where he was treated for critical injuries. First responders also discovered that Freeman had suffered fatal injuries during the crash, and pronounced him dead at the scene. No injuries were reported for the sedan’s driver, whose vehicle was still in the median following the accident.

CHP officials closed the eastbound lanes of Highway 126 in the area for several hours, as they began their investigation of the Ventura truck crash and worked to remove debris. Officials reopened the highway in the afternoon, but CHP Spokesman Officer Kevin Denharder says that the accident remains under investigation.

October 19, 2017
Officials are still looking for reasons as to why a 62-year-old man driving a Ford F-150 pulled into the path of an oncoming garbage truck in Bakersfield, in a fatal accident that occurred at the intersection of Golden State Highway and Snow Road. 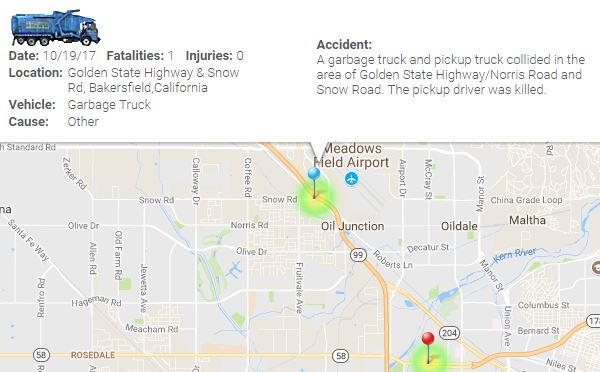 The pickup truck driver, who has since been identified as Robert Leon Sills, was traveling northbound on Snow Road just before 3:00 p.m. and stopped at a stop sign before pulling in front of the Varner Brothers garbage truck that was traveling on Golden State Highway. Sills died from the injuries he sustained in the crash.

Images from the scene show the white Ford truck cab almost completely crushed, with the garbage truck still embedded into the vehicle. Officials say that they do not believe drugs and alcohol were factors in the crash and that no injuries have been reported for the garbage truck driver, who is cooperating with the investigation.

October 9, 2017
All eastbound lanes of Highway 118 were shut down following an early morning accident involving six vehicles and a tanker truck.

The California Highway Patrol first received reports of the Hayvenhurst Avenue incident near Porter Ranch at 2:00 a.m. The media are reporting the crash occurred in Porter Ranch, but Granada Hills is closer. They shut down the lanes soon after as they worked to stop a diesel fuel leak from the tanker truck involved in the crash, and attempted to clear the crash scene. It was four hours before all eastbound lanes were reopened. 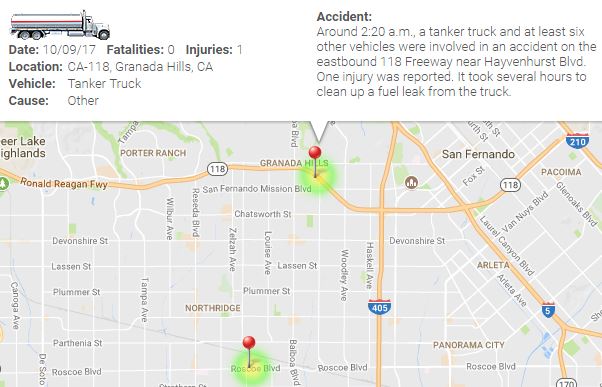 Officer Patrick Kimball of the CHP said that one person — a male — sustained injuries that required hospitalization. The individual was taken to nearby Providence Holy Cross Medical Center for treatment.

One Fatality in Underride Accident in Coachella

October 5, 2017
A 23-year-old Indio man is dead after his 2011 Ford F-350 truck struck the rear of a 2003 Sterling semi-truck with a trailer in Coachella. The man, since identified as Frank Mendez, was driving westbound on the 10 Freeway near Dillon Road at approximately 5:00 a.m. when the crash happened. 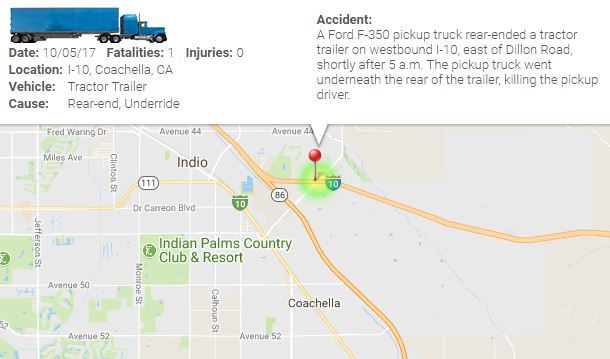 The force of the crash wedged Mendez’ truck under the trailer of the semi, and Mendez was pronounced dead at the scene. Underride truck accidents are often fatal, and factors that can provide safety in other accidents, like the seatbelt Mendez was wearing, do little to aid in this type of crash. An investigation into the cause of the crash is underway, but officials say drugs and alcohol are not thought to be factors.