On January 9, 2021, a Boeing 737-500 crashed into the Java Sea minutes after taking off from Indonesia’s capital Jakarta. Sriwijaya Air Flight 182 was carrying 62 people, including six crew members and 56 passengers, from Jakarta to Pontianak on the island of Borneo. The Indonesia plane crash killed everyone onboard. All of the reported fatalities were Indonesian nationals.

The international aviation attorneys at Baum Hedlund Aristei & Goldman are actively working with local investigators on the ground in Jakarta to uncover the cause of the Sriwijaya Air crash and hold any responsible parties accountable.

According to government officials, Sriwijaya Air Flight 182 departed at approximately 2:36 p.m. local time after a 30-minute delay due to heavy rain. Four minutes later, air traffic controllers lost contact with the airliner. The recorded conversations between the flight crew and air traffic controllers did not provide any clues into the cause of the fatal crash; the exchanges were routine, according to officials. No communications were recorded during the last minute of flight. 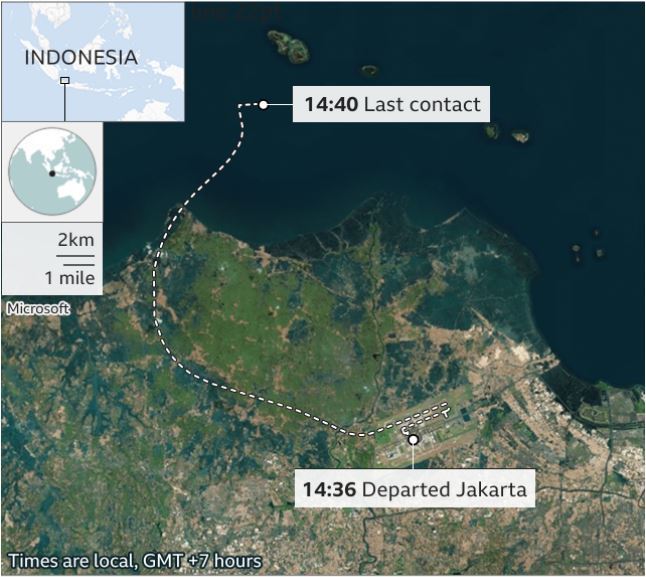 Indonesian media identified the flight captain as 54-year-old Afwan, a father of three who goes by one name, like many Indonesians. Afwan was a former air force pilot who reportedly had decades of experience.

Flightradar24.com, which charted the ill-fated flight, reported that the plane dropped 10,000 feet in less than a minute before it crashed into the Java Sea. The flight crew flying the 26-year-old plane did not send a distress signal before the crash.

According to a fisherman who witnessed the Sriwijaya Air crash, the plane fell into the sea and exploded in the water. He said parts of the Boeing 737-500 plane almost hit his ship. The Indonesian Navy deployed ships to help locate the debris and fisherman from the Thousand Island chain of islands spotted metal objects believed to be from the plane.

Did the Indonesia Crash Involve a Boeing 737 MAX?

The 737-500 that was destroyed in the Indonesia crash had previously been flown by United Airlines and Continental Airlines before it entered Sriwijaya Air’s fleet in 2012.

The 737-500 is not a 737 MAX model. The Boeing 737 MAX fleet of aircraft was grounded worldwide after two horrific fatal crashes caused by defective design and software flaws that Boeing hid from the United States Federal Aviation Administration (FAA) when seeking approval of the aircraft.

Hundreds of families who lost loved ones in the first MAX 8 crash of Lion Air Flight 610 in 2018 and the second crash of Ethiopian Airlines Flight 302 in 2019 filed lawsuits against Boeing for its defective and extremely dangerous aircraft.

On January 7, 2021, the U.S. Department of Justice announced it resolved criminal allegations against Boeing related to a conspiracy to defraud the FAA’s Aircraft Evaluation Group in connection with the group’s evaluation of the Boeing 737 MAX airplane model. Boeing agreed to pay over $2.5 billion in criminal fines which includes compensation payments to the families of the Lion Air and Ethiopian Airlines crashes.

Baum Hedlund Aristei & Goldman represented several families in Boeing lawsuits stemming from the Lion Air crash and the Ethiopian Airlines crash. Our firm earned justice and compensation for the families we represented.

What Caused the Sriwijaya Air Crash?

The official cause of the Sriwijaya Air crash in Indonesia will likely not be known for a year or more. Officials from Indonesia’s National Transportation Safety Committee and the Transport Ministry will lead the Sriwijaya Air Flight SJ-182 crash investigation. Boeing will cooperate with investigators and the U.S. National Transportation Safety Board (NTSB) will support the investigation as they did in the MAX 8 crashes.

The investigation will likely focus on the actions of the pilots, maintenance records for the destroyed 737-500, and any mechanical issues that may have caused or contributed to the air disaster. Investigators have noted that the plane sharply veered off its intended course before it entered into a steep nosedive and crashed into the Java Sea.

“It’s clear that something went drastically wrong very quickly,” says board-certified attorney Ronald L.M. Goldman, who has been litigating aviation cases for over 50 years. “When a plane suddenly and catastrophically veers from normal flight, it almost always implicates mechanical failure, not pilot error. It is now the job of the investigators to get the facts and give these families who are suffering immeasurably the answers they deserve.”

While the investigation is in its early stages, one issue that has risen to the forefront relates to the Boeing 737-500’s automatic throttle. According to Bloomberg, a person close to the crash investigation said the plane’s autothrottle was producing more thrust in one of the engines than the other after takeoff.

Significant differences in power between both engines would make an airliner exceedingly difficult to control. It is possible that a malfunction could cause the plane to bank hard to one side or descend rapidly. Autothrottle malfunctions have caused other fatal crashes, including the 1995 Tarom Flight 371 crash in Romania, which killed 60 people.

According to aviation attorney Clay Robbins, the 737 platform “has a history of autothrottle issues.”

“If that is what is involved and if it relates to a failure on the part of Boeing to remedy the logic and/or provide adequate pilot training recommendations, this tragedy may be yet another example of Boeing’s failure to properly address operational safety problems involving this aircraft.”

Goldman adds: “To blame the pilots for this tragedy is a rush to judgment, especially since early reports suggest malfunction of the Boeing 737’s autothrottle.”

National Transportation Safety Committee (KNKT) investigator Nurcayho Utomo indicated in a press briefing that a problem with the Boeing 737-500’s autothrottle system had been reported after a flight a few days before the SJ-182 crash.

Families who lost loved ones in the Indonesian crash will have the right to file a Sriwijaya Air lawsuit against Boeing if there is any indication that this crash was caused by a design defect or any fault of Boeing.

Could Prolonged Grounding be an Issue?

Another focal point in the Sriwijaya Air Flight 182 crash investigation relates to the prolonged grounding of the aircraft due to Covid 19 travel restrictions. The 27-year-old plane was reportedly out of service between March 27, 2020 and December 19, 2020. When the airline brought it back into service, it was used 132 times before the fatal crash.

Commercial airliners tend to deteriorate if they are not in regular operation. While the downed aircraft did pass safety inspections on December 2, 2020 (including clearance for engine corrosion) and December 14, 2020, the lack of regular use could be a factor in any technical or mechanical issue.

The aviation attorneys at Baum Hedlund Aristei & Goldman are deeply saddened by the tragic loss of life in the Sriwijaya Air Flight 182 crash. As an international aviation law firm representing victims of air disasters around the world, we are closely monitoring the crash investigation.

Our firm has litigated international air crash cases against (among others):

The Boeing 737-500 with 62 people on board crashed into the Java Sea shortly after departure from Soekarno–Hatta International Airport. The flight was taking passengers from Jakarta to Pontianak when it drastically went off course and crashed.

Divers have not yet been able to locate the second black box, the Cockpit Voice Recorder (CVR), which would provide investigators with more information on what went wrong before the Sriwijaya crash.

February 2, 2021 | Accident Attorneys with Experience Litigating Against Boeing Urge Sriwijaya Air Families to be Cautious– Aviation attorneys from the law firm of Baum Hedlund Aristei & Goldman are urging those mourning the loss of family members in the Sriwijaya Air crash to avoid signing release and discharge forms.

According to Robbins, the compensation is emergency money for the SJ 182 families to tide them over until their full legal rights are determined. Additional compensation may also be available.

"If the investigation shows fault on the part of the airline or the aircraft manufacturer, Indonesian law provides for additional compensation against the responsible parties," says Robbins.

The announcement came shortly after reports indicated that investigators have focused their attention on the plane’s autothrottle system.

A person with knowledge of the crash investigation said the Boeing 737-500’s autothrottle produced more thrust in one of the plane’s engines than the other before the airliner crashed into the Java Sea.

Significant differences in power between the engines could make an airliner exceedingly difficult for the pilots to control.

Autothrottle malfunctions have caused other aviation disasters, including the 2009 crash of Turkish Airlines Flight 1951, also a Boeing 737.

In 2020, the New York Times wrote: “Decisions by Boeing, including risky design choices and faulty safety assessments, also contributed to the accident on the Turkish Airlines flight." The Tarom Flight 371 crash in 1995 that killed 60 people also involved the autothrottle.

The Boeing 737 platform "has a history of autothrottle issues," says airline accident attorney Clay Robbins. "If that is what is involved and if it relates to a failure on the part of Boeing to remedy the logic and/or provide adequate pilot training recommendations, this tragedy may be yet another example of Boeing's failure to properly address operational safety problems involving this aircraft."

January 19, 2021 | More Sriwijaya Air Victims Identified, Search for Missing Black Box Continues – Authorities have now identified 40 victims from the SJ 182 crash in Indonesia from DNA and fingerprints. Of the 50 passengers aboard the ill-fated flight, 10 were children, including three infants on board.

Three generations of one family traveled together on SJ 182: grandparents Toni Ismail and Rahmawati, both 59 years old; the couple’s daughter, 32-year-old Ratih Windania, who was five months pregnant; Ms. Ratih’s 3-year-old daughter Yumna Fanisyatuzahra; and Ms. Ratih’s 8-year-old nephew, Athar Rizki Riawan. The family was notified that the remains of Mr. Toni and Ms. Rahmawati had been identified over the weekend.

Another multigenerational family traveling together on Flight 182 have been identified in the media as 50-year-old Rossi Wahyuni, who was traveling with her son, 25-year-old Rizki Wahyudi, his wife, 26-year-old Indah Halimah Putri, the couple’s eight-month-old son, Arkana Nadhif Wahyudi, and an orphaned grandniece, 12-year-old Nabila Anjani.

Divers are continuing to search for the Cockpit Voice Recorder, the other “black box,” which broke apart during the crash. Thus far, divers have only recovered the device’s signal beacon, the plastic casing, and the battery. Last week, officials found and downloaded information from the Flight Data Recorder (FDR).

According to FlightGlobal, Indonesian investigators plan to issue a preliminary report on the Sriwijaya Air crash in early February.

January 15, 2021 | Officials Download Flight Data, Still Searching for Cockpit Voice Recorder – Investigators have downloaded data from one of the two black boxes aboard SJ 182. According to officials, the Flight Data Recorder (FDR) recovered earlier this week was “in good condition.”

While investigators sort through information from the FDR, divers are still trying to find the other black box – the Cockpit Voice Recorder (CVR). On Friday, divers were able to find the casing and beacon from the CVR but the search remains for the memory unit. Navy official Abdul Rasyid said he is confident divers will find the memory within the next few days.

Investigators plan to issue a preliminary report on the Sriwijaya Air crash within the next 30 days.

January 13, 2021 | Navy Divers Recover Flight Data Recorder – Divers on Tuesday were able to recover the first of two black boxes aboard the ill-fated SJ 182 flight. Investigators hope that the Flight Data Recorder (FDR) will provide answers as to what caused the crash in Indonesia.

In other investigation news, officials now say it is likely the Boeing 737-500 plane was intact and did not explode before crashing.

January 11, 2021 | Investigators Locate Black Boxes and Identify First Victim– Search teams say they have discovered the location of the black boxes from the SJ-182 wreckage. Investigation officials also reported today it is “most likely” the case that the Boeing 737-500 was intact when it hit the water.

The Indonesian government officially identified the first victim from the fatal crash as 29-year-old Okky Bisma, a flight attendant.