June 15, 2020, Salt Lake City, Utah – – Attorneys from the law firm of Baum Hedlund Aristei & Goldman have filed a lawsuit against American Airlines and CheapOAir alleging flight attendants and cabin crew members forced a disabled amputee passenger to crawl from her seat to the lavatory because the airline failed to equip the plane with an aisle wheelchair, causing the passenger humiliation and injuries.

Attorneys Ronald L.M. Goldman and Diane Marger Moore filed the complaint in U.S. District Court for the District of Utah, Northern Division on behalf of Tammy S. Spears and her husband, Robert G. Spears, both of Idaho. The case number is 2:20-cv-00367-TC.

The complaint names as defendants American Airlines Group Inc. of Texas and CheapOAir Inc. of New York. Among other things, the lawsuit alleges that American Airlines negligently failed to have an aisle wheelchair on Mrs. Spears’ flight and failed to warn her that that there would be no means for her to get to an onboard lavatory during the flight if the need arose.

The lawsuit further alleges that CheapOAir, the company that sold Mrs. Spears’ ticket for air travel, negligently failed to inform American Airlines of Mrs. Spears’ disability and special needs and failed to give Mrs. Spears any information about how and when to notify the airline to arrange for an on-flight aisle wheelchair.

The counts for damages against American Airlines and CheapOAir are as follows: 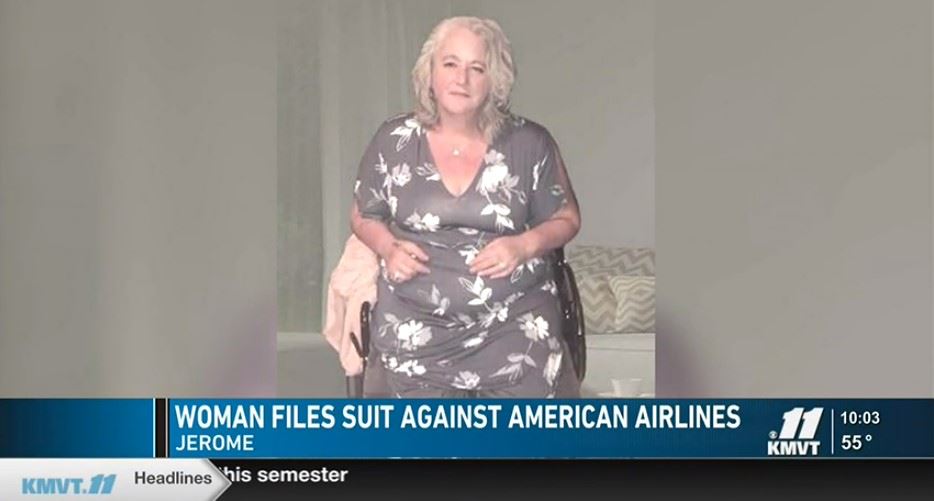 In June of 2018, plaintiff Tammy S. Spears had her left leg amputated below the knee. She had no prosthesis. She is confined to a wheelchair and legally blind. After years of battling multiple illnesses and disabilities, she finally had the opportunity to visit her family on the east coast.

In late June, Mrs. Spears used CheapOAir to book an American Airlines flight to visit her sibling in August. This was to be Mrs. Spears’ first plane flight since she suffered the amputation.

To ensure safe air travel, Mrs. Spears, along with her husband and son, consulted with American Airlines before and after purchasing tickets for the planned trip. According to Mrs. Spears, the airline advised her and her family that only certain aircraft carried in-flight aisle (wheel) chairs and recommended those flights between Salt Lake City, Utah and Charlotte, North Carolina that would accommodate her disability. American further advised that Mrs. Spears was to give the airline 48-hours advance notice of her wheelchair needs prior to her flight(s).

Per the complaint, she complied with American’s recommendations and booked travel from Salt Lake City to Charlotte, then a connecting flight from Charlotte to Richmond, Virginia. She also informed the airline of her wheelchair needs more than 48 hours in advance of her flights, according to the lawsuit.

The events described below are Mrs. Spears’ allegations; there has been no determination of liability:

According to the complaint, as a result of the defendants’ negligence and failure to warn that Mrs. Spears would not have access to an aisle wheelchair, she suffered burns, strains, and other physical pain. Furthermore, as a result of American Airlines’ infliction of severe emotional distress on Mrs. Spears, she has suffered nightmares, fear of flying, anxiety, depression, and other emotional injuries.

“American Airlines and CheapOAir owed a duty of care to Mrs. Spears to provide her with an aisle wheelchair,” says board-certified attorney Diane Marger Moore. “They not only failed to provide her with a chair, they failed to warn her that without one, there would be no means for her to use the lavatory for the duration of the flight. These failures combined with the flight crew’s lack of compassion caused physical and emotional harm to our client that may not ever fully heal.”

“I have been litigating cases against major airlines for more than four decades,” says veteran trial attorney Ronald L. M. Goldman. “The indignity that our client suffered at the hands of American Airlines is unlike anything I have ever seen. We intend to hold the defendants accountable for their outrageous and intolerable conduct, and we hope the litigation sends a strong message that negligence of this magnitude will carry steep consequences.”

Senior shareholder and trial lawyer, Ronald L. M. Goldman, has been practicing law for nearly 60 years. He is board certified by the National Board of Trial Advocacy as a Civil Trial Lawyer and Civil Pretrial Practice Advocate. He was a private pilot for many years and has been handling airline accidents and incidents since 1972.

Diane Marger Moore is triple board certified. She has earned the same two certifications as Mr. Goldman and she is also board-certified in truck accident law. She is a very accomplished attorney, having conducted over 200 jury trials. She has been practicing law since 1978.

Baum Hedlund Aristei & Goldman has successfully litigated against most major airlines in the United States, including more than 80 personal injury and wrongful death cases against American Airlines. Across all areas of practice, the firm’s attorneys have won more than $4 billion in verdicts and settlements, including the $2B verdict last year against Monsanto—#1 verdict in California last year and the ninth-largest in US history. With a track record of success going back decades, the nationwide firm has earned a reputation for breaking new ground, holding Fortune 500 companies accountable, influencing public policy, raising public awareness, and improving product safety. The firm has received many honors and awards—most recently listed in The National Law Journal’s 2018-2020 Elite Trial Lawyers and The Best Lawyers in America® (2014-2020).