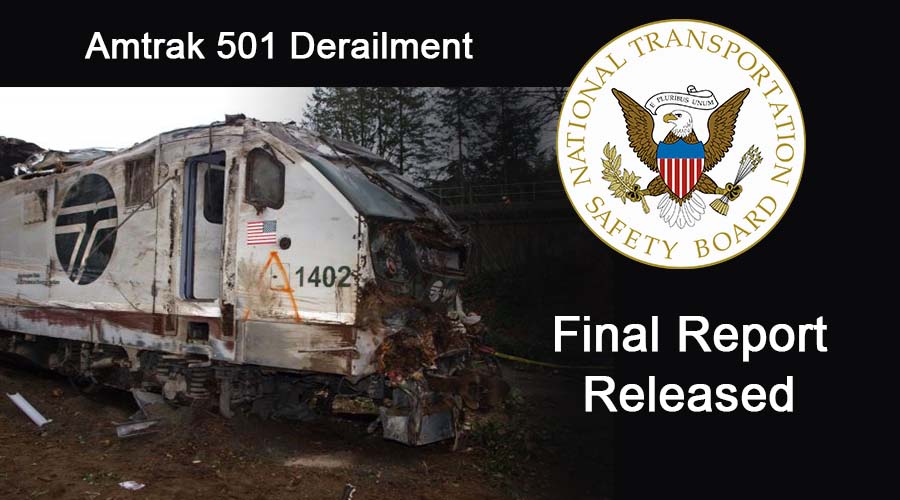 The National Transportation Safety Board (NTSB) has issued its final report into the fatal 2017 Amtrak train derailment in Washington. In its report, officials said the engineer was not aware of where he was along the track before a curve, but they further noted that decisions and inaction by Amtrak and regulators created a situation that allowed the crash to occur. Ultimately, the NTSB blamed the crash, which killed three people, on lax safety oversight, unclear responsibility, and inadequate training.

The crash highlighted the importance of positive train control for passenger safety and underscored how dangerous train crashes are.

The Amtrak Cascades train was on its inaugural run with paid passengers along a new route from Tacoma to Portland on Dec. 18, 2017. Partway through the trip, at 7:34 a.m. near DuPont, Washington, the southbound train entered a curve at a high speed and derailed with part of the train falling onto Interstate 5. When the train derailed it had 77 passengers, five Amtrak employees, and a Talgo, Inc. technician onboard. Three people on the train died and 57 suffered injuries, while eight people on the interstate also suffered injuries.

According to the NTSB, during the trip the engineer told the qualifying conductor that he was new to the route, having only operated one roundtrip over that same route. The engineer later told investigators that he was not trained properly in the new locomotive used on the Cascades line and was not familiar with the overspeed alarm on the locomotive, which activated before they entered the curve. That curve had a speed restriction of 30 miles per hour, but the train was moving at 78 miles per hour.

The NTSB released its final, 153-page report, along with comments from agency vice chairman Bruce Landsberg. In his comments, Landsberg said the word “accident” was not appropriate because the event was entirely predictable.

“There was a Titanic-like complacency and certainty exhibited by those tasked with the safety, operation and management of the Point Defiance Bypass rail line before the revenue service started in 2017,” Landsberg wrote. “The term ‘accident’ is inappropriate because that implies that this was an unforeseen and unpredictable event. It was anything but unforeseeable.”

Landsberg further noted that his agency has investigated speed-related derailments on curves for decades and has repeatedly called on the Federal Railroad Administration (FRA) to implement positive train control, which would automatically slow or stop speeding trains. For its part, Congress mandated positive train control, but many railroads did not meet the end-of-2018 deadline. According to the NTSB, lack of positive train control contributed to 150 accidents that killed 303 people and injured 6,800 in the last 50 years.

Ultimately, the NTSB laid the blame with Sound Transit for not adequately addressing the danger of that particular curve, Amtrak for providing insufficient engineer training, the state’s Department of Transportation for allowing passenger train service without ensuring safety along the route, and the FRA for allowing European-style railcars to be used even though they do not meet current standards.

The Amtrak Cascades line uses four Talgo trainsets—two owned by Amtrak and two owned by Washington state—which the NTSB has recommended replacing. The Washington Department of Transportation said the trains met the safety standards when they were first used. As a result, they were grandfathered in and are still in use even though they no longer meet new safety regulations.

In its report, the NTSB said the railcars pose an unnecessary risk to passenger safety and should be replaced. Additional recommendations include installing seatbelts aboard trains—the three people who died were ejected from the train in the crash—and using frontward and inward-facing recorders.

Confirming that the crash was foreseeable, engineers and conductors reportedly warned Amtrak supervisors that they did not feel they received adequate training along the new Cascades route. Workers called their training “totally inadequate” and reported feeling unprepared to operate trains on the upgraded Cascades line. Although they did undergo training runs, some of those runs were conducted at night with six or more crew members in cars with just three seats, and some trainees riding backward in the dark so they could not familiarize themselves with the route. Engineers, meanwhile, said they had too few practice runs in which they controlled the train.

It was not just the route that was new; engineers also had to familiarize themselves with new locomotives. Although some complained to their supervisors, they also said they feared losing their jobs and would only speak to reporters anonymously. Amtrak has been under fire in previous train crashes for what officials say is “deficient safety management.”