We are honored to represent the families of several of the brave service members who died in this tragedy.

Early in the evening of July 10, 2017, a Marine Corps KC-130T plane experienced a catastrophic mechanical failure at cruise altitude and crashed in Leflore County, Mississippi, killing 15 Marines and one Navy Corpsman. There were no survivors. The probable cause of the crash remains under investigation.

The plane departed from Marine Corps Air Station Cherry Point, North Carolina, and was transporting personnel and equipment to the Naval Air Facility, El Centro, California. According to reports, the military plane went down at around 4:00 p.m. in a soybean field between the cities of Itta Bena and Moorhead.

The aviation accident is the deadliest the Marine Corps has experienced in more than a decade. If you lost a loved one in this tragedy and are interested in learning more about your legal rights, contact the aviation attorneys at Baum Hedlund Aristei & Goldman today for a free case evaluation, or call (855) 948-5098.

According to Marine Brig. Gen. Bradley James, the crash left two “large impact areas.” One of the impact areas was a half-mile north of US Route 82, and the other about a half-mile south of the highway. The remains of the deceased were found at both impact areas, and debris from the ill-fated flight was scattered over several miles.

Given the impact zones and large debris field, aviation attorney and Marine Corps veteran Timothy Loranger believes that the plane must have experienced some kind of in-flight catastrophic mechanical failure.

“While the investigation into this tragedy is still in the early stages, it appears that the aircraft experienced a mechanical failure related to one of its four engines at cruising altitude that caused an in-flight breakup and the pilots to lose control,” said Loranger, who worked on the Lockheed C-130 Hercules during his years of service in the Marine Corps. “I would hope, and expect, that an examination of the propeller systems will be conducted to determine if a malfunction of one of them could have initiated the catastrophe.”

“The KC-130 Hercules has long been considered a workhorse of the Marine Corps, used for refueling of other aircraft, as well as transporting personnel and equipment. While these aircraft are traditionally thought of as being reliable, many who work on them and fly them know that they can, at times, be temperamental.”

The military is conducting an investigation into the Mississippi plane crash. A final report on the cause of the crash is not expected to be released for several months.

“My thoughts and prayers are with the families of the Navy Corpsman and my fellow Marines who lost their lives,” said Loranger. “This tragedy requires a thorough investigation and appropriate steps to avoid a repeat in the future.”

Witnesses Recall the Horror of the Mississippi Military Plane Crash

Area resident Andy Jones first noticed the plane as it was falling from the sky. Jones initially thought the aircraft must have been a stunt plane because it looked as if it were blowing smoke from the back. It soon dawned on him that the aircraft was in trouble and that the smoke he saw was actually coming off one of the wings.

“It didn’t take me very long to realize it was something that was about to be very tragic,” said Jones.

David Habig, a crop duster pilot, was one of the first to arrive at the scene of the KC-130 military plane crash. He found the aircraft upside-down and engulfed in flames with bodies lying in the soybean field. “They were everywhere,” Habig said. “It was horrific…I’d never seen anything like it.”

According to the New York Times, six of the Marines and the Navy Corpsman involved in the KC-130 military plane crash belonged to the Second Marine Raider Battalion, part of the Marines’ Special Forces Command based at Camp Lejeune in North Carolina. Created in 2006, the command consists of about 2,800 troops, making it the newest and smallest of the military’s elite special operations forces. 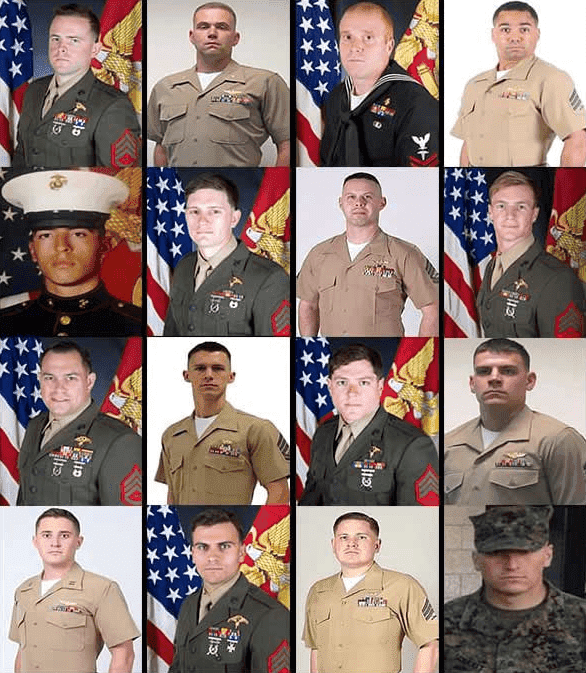 In early Dec. 2018, The Marine Corps released the results of its investigation into the KC-130T crash. Marine Corps officials personally briefed each of the family members about the results of the investigation shortly before the report was released to the public. In short, the Marine Corps found that the crash occurred when one of the propeller blades fractured due to the presence of corrosion in the metal. The presence of corrosion was attributed, in part, to the failure of mechanics at Warner-Robins Air Force Base to identify and remove the corrosion during an overhaul of the propeller.

While the briefing answered some questions, the investigation left many questions unanswered. Ashley Kundrat, whose husband was Marine Staff Sgt. William Kundrat said she still has questions about the disaster, including whether there was a history of faulty work at the Air Force’s Warner Robins Air Logistics Complex in Georgia.

Mrs. Kundrat’s attorney Timothy Loranger, of Baum Hedlund Aristei & Goldman, attended several of the family briefings and says that the families need a more thorough explanation of the factors that allowed the plane crash to occur.

“A failure like this is outrageous,” Loranger told The Washington Post. “It’s outrageous to think that [the victims] could not assume that the military and the people working for the military were not performing to the highest standards that we would expect.”

Baum Hedlund Aristei & Goldman is honored to represent seven families whose lives were devastated by the KC-130T plane crash.

More than 200 friends and family members of the Marines and Navy corpsman who died in the Mississippi plane crash will gather to honor the victims. The memorial takes place in Itta Bena and involves dedicating a monument to those who died in the crash. That memorial will be outside a government building. Meanwhile, officials renamed the section of U.S. 82 that runs through the debris field the Yanky 72 Memorial Highway after the plane’s call sign.

Investigators have not released a cause for the plane crash, but the investigation is ongoing. The 12 remaining Marine Corps KC-130Ts were grounded temporarily after the crash. Some were put back in use months after the tragedy. The Navy is replacing the propellers on its C-130Ts, though the propellers have not yet been directly blamed for the Military plane crash.

A large memorial for the plane crash victims is planned for Highway 82, across from Mississippi Valley State University, approximately six miles from the crash site. The monument will consist of the shape of the KC-130T and the two insignias, along with the names of the 15 Marines and 1 Navy corpsman. The memorial will also include the squadron patch and three flags: the American flag, the U.S. Navy flag, and the U.S. Marine flag. Each flagpole will have 16 lights, one for each casualty.

Funds are being raised to help with the cost of the memorial.

The Wingman Foundation created a donation page for the families of Reserve Marine Corps KC-130T Hercules squadron, known as the “Yankees,” based at Stewart Air National Guard Base. All donations will be given directly to squadron families to help with current and future expenses. By donating, you will be helping families fund airfare, hotels, rental cars, meals, and even unit memorials.