Scientists, doctors, educators, consumer advocates, members of non-profit organizations, plaintiffs’ attorneys in the Monsanto Roundup litigation, and a host of other people delivered public comments at Wednesday’s OEHHA glyphosate hearing, urging the agency to change its proposed glyphosate Safe Harbor NSRL. Nearly all who spoke shared the same opinion: the proposed 1,100 micrograms NSRL is too high and makes the Safe Harbor unsafe. However, several Monsanto representatives and like-minded farming entities touted there should be no limit at all.

“Overall, glyphosate poses an unreasonable risk of adverse effects to humans, animals, and the environment,” said Dr. Stephen Frantz, a research scientist. “There is no ‘safe level’ for glyphosate … it causes damage wherever it goes.”

Earlier this year, a court ruling opened the door for California to become the first U.S. state to label Monsanto’s Roundup as a possible human carcinogen in accordance with Proposition 65, a ballot initiative approved in 1986 to address concerns about exposure to toxic chemicals. Prop 65 requires California to publish a list of chemicals known to cause cancer, birth defects, or other reproductive harm.

In 2015, the World Health Organization’s International Agency for Research on Cancer (IARC) classified glyphosate as a “probable human carcinogen.” California legislation permitted OEHHA’s adopting the IARC findings for listing glyphosate as a probable carcinogen. Such a finding would require products, including glyphosate, to include a carcinogenicity warning.

Monsanto challenged OEHHA’s adopting the IARC findings in court, and after losing that challenge, filed a notice of appeal.

In the meantime, OEHHA proposed a level of safe glyphosate exposure for which no warnings would be required. Such a level suggests no significant risk (No Significant Risk Level) and would provide a Safe Harbor for companies whose product use does not exceed that limit. 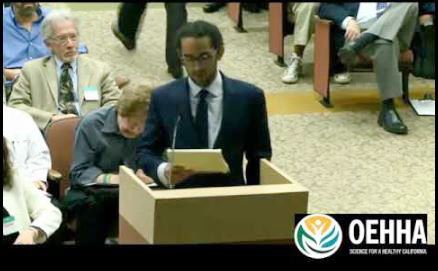 Many speakers at the OEHHA glyphosate hearing used their time to cite studies linking glyphosate exposure to a litany of serious health issues and to express concern about how the agency came up with the proposed NSRL. According to Roundup cancer attorney Pedram Esfandiary of Baum Hedlund Aristei & Goldman, OEHHA’s proposed Safe Harbor NSRL doesn’t include an epidemiological appraisal, as required in California Code of Regulations Section 25703:

“California Code of Regulations Section 25703, which the Initial Statement of Reasons purports to follow, specifically requires an appraisal of epidemiologic data in a quantitative assessment of a No Significant Risk Level,” said Esfandiary.

“Although the Initial Statement of Reasons relies upon a single animal bioassay, as required by the statute, it fails to consider any epidemiological studies. This falls short of the statute’s requirement that the quality and suitability of available epidemiologic data be appraised.

OEHHA officials stated at the beginning of the hearing that it calculated the glyphosate NSRL by using a single rodent diet exposure study. A number of speakers intimated that using data from a rodent diet study does not account for human dermal or inhalation exposure farm workers, landscapers, and gardeners experience.

When glyphosate is absorbed through the skin, it is not promptly excreted via the digestive system. This means that 100 percent of the dermal exposure amount circulates throughout the body for an extended period of time. The EPA’s high estimate for glyphosate applicators who absorb the chemical through the skin is 7mg/kg/day (according to the federal EPA’s Scientific Advisory Panel (SAP) final report on glyphosate). This equates to a dose of 490,000 micrograms, which is significantly more potent than an equivalent dose absorbed via diet, since only 20-30 percent of the dietary source is actually absorbed, whilst the rest is excreted. 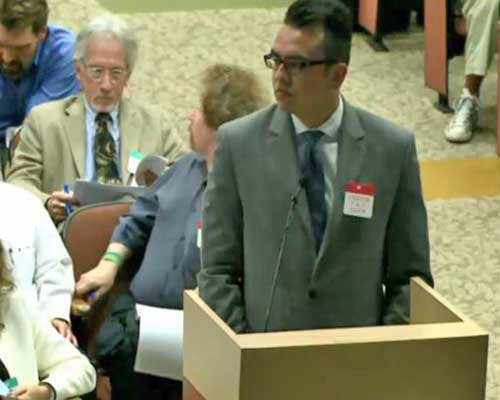 Some who spoke at the OEHHA glyphosate hearing asserted that the dietary NSRL metric is not an accurate indicator of safety for large numbers of the population, including farmers and agricultural workers, that use glyphosate on an industrial scale. A more comprehensive analysis would account for dietary ingestion, inhalation, and absorption through the skin. Epidemiology studies incorporate data from inhalation and dermal exposure, so epidemiological literature is imperative to assess risks for glyphosate applicators since that data is based on real-world human exposure.

Nicholas Chavez of United Farm Workers (UFW), an organization that has worked to protect farmworkers and consumers from dangerous pesticides and chemicals for over 50 years, briefly touched on this point during his public comment. Chavez, on behalf of UFW, urged OEHHA to “use science responsibly before determining what levels of glyphosate are safe for farm workers and consumers.”

According to the federal EPA’s SAP report on glyphosate, tumors were discovered at much lower doses that actually fall within the proposed Safe Harbor, a point which was touched on by several speakers at the hearing.

The Safe Harbor level is based on mice exposures of 1000mg/kg-day, which led to the development of Hemangiosarcoma (highly invasive cancer arising from the lining of blood vessels); but Esfandiary cited four carcinogenicity studies in mice that yielded tumor incidence at much lower exposure doses, which naturally leads to the conclusion that the proposed Safe Harbor is too high when converted to human body weight:

Esfandiary said OEHHA would have reached “a significantly lower NSRL” if these studies had been considered prior to proposing the NSRL. 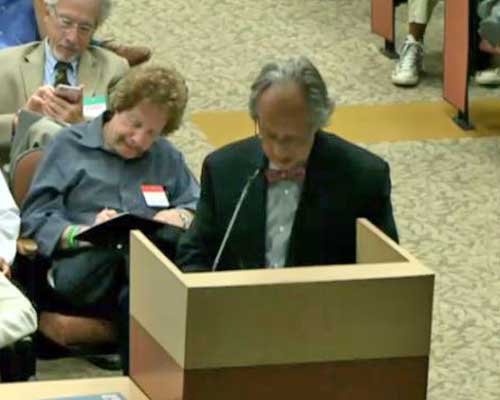 “Monsanto claims glyphosate to be safe to animals and humans because they do not possess the shikimate pathway,” said Dr. Anthony Samsel, a research scientist who has spent years studying glyphosate. “However, this statement is inherently false.”

Monsanto’s claim that glyphosate is safe because humans don’t have a shikimate pathway disregards the millions of bacteria, fungi, and other microorganisms in or on human mucous membranes, skin and the gut that rely upon the shikimate pathway that glyphosate interrupts. Health risks follow when glyphosate disrupts the microbiota cells that regulate numerous biological processes such as the immune system and digestion.

Aberrant activity by such microbiota has been linked with both lymphomagenesis (the development of lymphoma) and carcinogenesis (the production of cancer). In fact, one of the common precursors to carcinogenesis is microbial inflammation. 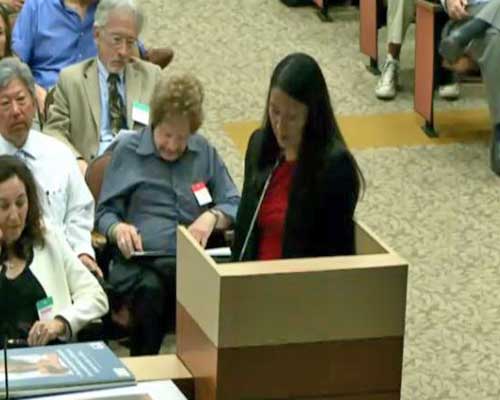 Zen Honeycutt, the founder and director of Moms Across America, spoke at the hearing “on behalf of thousands of mothers and families who are struggling with health issues in California.”

“We do not want any glyphosate exposure to our children through food, water, or any products,” Honeycutt said. “We want the current products which do contain glyphosate to be immediately labeled. The current scientific data and skyrocketing numbers of children and family members with chronic illness and cancer show us that the only ethical action for the CAL EPA to declare a No safe level of glyphosate. Zero.”

Bob McFarland, president of the California Guild, shared Honeycutt’s belief that there is no safe level of glyphosate. To McFarland, the question of allowable glyphosate exposure levels is a simple one:

“What amount of poison are we going to allow in our water and in our food supply?” he asked.

“By not considering epidemiology, multiple exposure routes, and glyphosate’s effect on human microorganisms, the proposed NSRL may well establish a ‘Safe Harbor’ that is anything but safe,” said Roundup cancer attorney Michael Baum, who submitted a written comment to OEHHA prior to Wednesday’s hearing. In December 2016, Baum was appointed to serve on the Executive Committee for the ongoing Monsanto Roundup MDL before U.S. District Judge Vince Chhabria in Northern California.

The law firm of Baum Hedlund Aristei & Goldman is representing hundreds of farmers, farmworkers, gardeners, landscapers, government workers, and others from across the country who are suing Monsanto, alleging exposure to Roundup caused them to develop non-Hodgkin lymphoma.

What Happens Next With OEHHA Proposed Glyphosate Regulation?

OEHHA is allowing for written public comments on the proposed glyphosate NSRL to be submitted until June 21. The public is encouraged to submit written information via e-mail to mailto:[email protected] with “GLYPHOSATE NSRL” in the subject line or at https://oehha.ca.gov/comments.