The lead cases are: 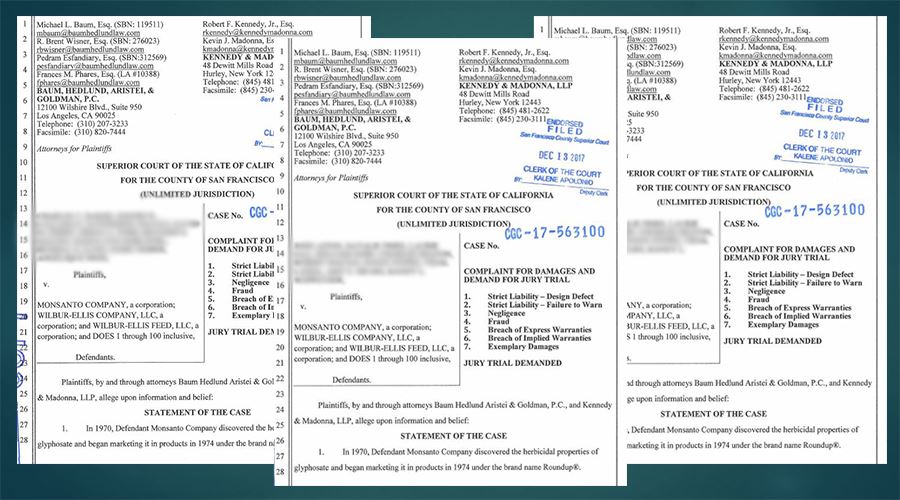 Glyphosate, the active ingredient in Roundup, was initially patented in 1961 as a descaling and chelating agent used to clean out mineral and calcium deposits in pipes and broilers. In 1970, Monsanto discovered the herbicidal properties of glyphosate and began marketing it in 1974 under the brand name Roundup®.

On March 20, 2015, the International Agency for Research on Cancer (IARC) issued an evaluation of glyphosate, which traced the health implications from exposure to glyphosate going back to 2001. In its comprehensive report, IARC concluded that glyphosate is a probable human carcinogen (Group 2A), and that the cancers most associated with glyphosate exposure are non-Hodgkin lymphoma and other hematopoietic cancers. The IARC report also found that glyphosate exposure caused DNA and chromosomal damage in human cells, as well as genotoxic, hormonal and enzymatic effects in mammals.

At one point, Monsanto advertised that Roundup was “safer than table salt” and “practically non-toxic,” assertions that prompted the New York Attorney General (NYAG) to file a lawsuit against the company for false and misleading advertising. Following the NYAG lawsuit, Monsanto entered into an Assurance of Discontinuance in which the company agreed to, among other things, “cease and desist from publishing or broadcasting any advertisements that represent, directly or by implication” that glyphosate-based herbicides are safe, non-toxic, harmless or free from risk.

Among other things, the lawsuits allegations accuse Monsanto of engaging in the following to validate its false claim that Roundup is safe:

In March 2018, in the federal Roundup MDL, lawyers from the Plaintiffs and Defense side will participate in what is known in the legal community as “Science Day” or “Science Week.” This is where the two sides present their experts to educate the court on the science behind both sides of the Roundup cancer connection.

U.S. District Court Judge Vince Chhabria will oversee a legal proceeding known as a Daubert hearing, where he will assure that scientific expert “live” testimony meets the “scientific knowledge” threshold needed at trial. Plaintiffs must show they have scientific proof to back their claims that Roundup/glyphosate causes non-Hodgkin lymphoma.

Thousands of other plaintiffs have made similar claims against Monsanto in state courts in California, Delaware, Missouri, Nebraska and elsewhere. The first trial in the Roundup litigation is a state court case, which is scheduled to begin on June 18, 2018 in Superior Court for the County of San Francisco. The plaintiff in that case, Dewayne Johnson, is represented by the Miller Firm. Another state court case in St. Louis, Missouri will begin in October 2018.

On Wednesday, December 20, 2017, an important hearing will take place in Alameda County Superior Court. The Judicial Council of California (JCCP) has directed the presiding Judge of the Superior Court of California, County of Alameda, Judge Ioana Petrou, to sit as coordination motion judge to determine whether coordination is appropriate for the hundreds of Roundup non-Hodgkin lymphoma cases filed in the state. It is expected that the judge will determine that it is appropriate and necessary to consolidate all the Roundup cases filed in California in one court under one judge. This will prevent redundancy and allow for efficient organization and litigation of the cases.

Plaintiffs’ attorneys estimate the total number of plaintiffs being represented to be around 3,500 with approximately 2,200 cases filed in state and federal courts. The law firm of Baum Hedlund Aristei & Goldman currently represents nearly 600 clients in the Roundup litigation.

Since the beginning of the litigation, Baum Hedlund and other law firms have led the fight to declassify and publish court documents that include internal Monsanto communications, reports, studies and other memoranda. These discovery documents, now internationally known as ‘The Monsanto Papers’, allow people to see what is happening “behind the curtain” of secrecy that normally shrouds ongoing litigation.

“These documents show that Monsanto has deliberately been stopping studies that look bad for them, ghostwriting literature and engaging in a whole host of corporate malfeasance,” says attorney R. Brent Wisner.

“We look forward to our clients getting their day in court. Plaintiffs will finally have a jury examine the plethora of evidence that will support the facts that show Monsanto has been aware for decades that Roundup causes cancer and should have warned about it from the beginning.”

About the Roundup Attorneys Taking on Monsanto

Baum Hedlund Aristei & Goldman and Robert F. Kennedy, Jr. are working together with other consumer attorneys from across the country in representing victims who allege exposure to Roundup caused them to develop non-Hodgkin lymphoma.

Baum Hedlund has successfully handled thousands of cases, securing over $1.5 billion in verdicts and settlements on behalf of their clients in all its areas of practice.* With decades of experience litigating personal injury and wrongful death cases, the firm has developed a reputation for holding Fortune 500 companies accountable, influencing public policy, raising public awareness and improving product safety.