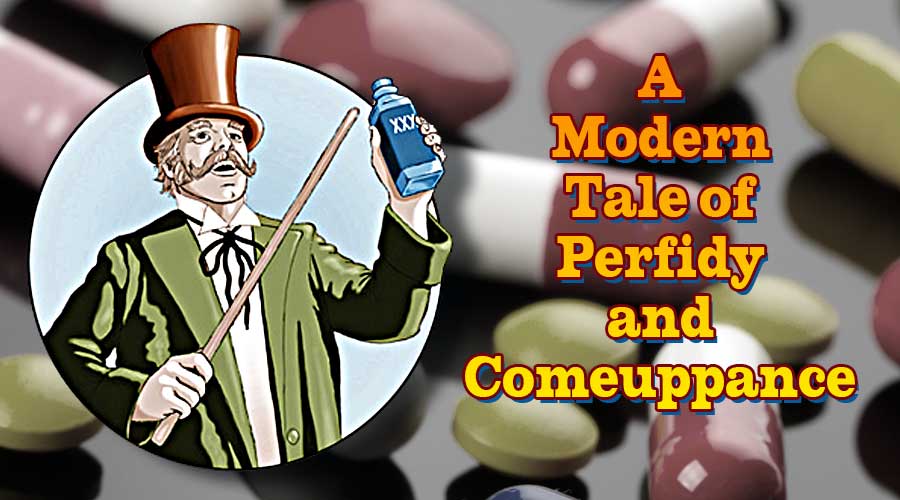 A Modern Tale of Perfidy and Comeuppance
(A “Fiction” inspired by an article in the September 17, 2015 issue
of The Chronicle of Higher Education)

Here’s the deal: A medical doctor who acts as a “key opinion leader” (KOL) for Big Pharma puts his or her name on an article that pushes a drug without thoroughly, and independently, checking out the data that is supposed to support the article. Big checks are accepted, and little work is done to verify the claims made in the draft of the article presented by the company that stands to make billions of dollars if the drug’s sales can by hyped. Sign your name—cash the check—publish the article—deny responsibility when children are hurt, or die, taking the drug.

This is the profile of a modern, highly paid “professional” drug pusher. He or she does not skulk around in dark alleys, selling dime bags of poison. No-siree-bob: this person sits in fancy offices and calls him/herself “doctor.” Titles like professor are bestowed. Congratulations pour in for bringing lots and lots of money into Universities, and riches pour into the pockets of this 21st Century hawker of elixirs, potions and pills that, they claim without solid and independently verified facts, will cure whatever Big Phama says ails you.

And then there are the enablers. Probably not who you think. The true enablers are the so-called Peer Review Journals that masquerade as scientifically rigorous. But, what happens: Big pharma gets its drug pusher KOL, in return for a big fat fee, to review data it chooses to present. Our “hero” never asks for the complete raw data (why work so hard?), and claims a scientific review of that data that has been set-up to show a rosy future of curing all kinds of real and imaginary ills. The KOL/pusher “scientifically” reviews that cherry picked data (spiced here and there with bogus “facts”) and—surprise—finds the drug cures everything from in-grown toe nails to alopecia, and everything in between. An article is (ghost?) written extolling the drug, and shown to other doctors who, in turn, do nothing to check the article’s data against the raw data, and they find—wait for it—the fictitious analysis fits the fictitious facts perfectly: they praise the author, so the Journal publishes it. The magazine gets terrific advertising revenue from all the big pharma factories, including the one selling the drug that is the subject of the article. And there you have it—everyone is dollar happy.

Until pediatricians and others start reporting injuries, attempted suicides and deaths related to kids who were put on the drug our KOL so casually pushed.

And, here’s the ugly: When the parents get angry at finding out that their kids got sicker, not better, because the data actually was manipulated and misrepresented—and actually not helping their children—and sued, the drug pusher and his supplier push back, fight for the right to be wrong, and, in the end think the best thing to do is blame the lawyers, the parents and likely the kids for exposing their dastardly scheme, all of whom, they piously claim, conspired against them just to make money.

And how were these erstwhile professionals outed? The drug company never voluntarily gave up the raw data, or its internal documents that showed corporate knowledge that the stuff was no damn good. It took the lawyers representing the kids to force the documents out into the light of day so that truly independent scientists could look at, and analyze the data. When that was done—and here is the sweet irony—the company’s own data and documents show that the “peer reviewed” article was a bunch of bunk. Sadly, by that time, too many kids had suffered.

So, was our “hero” the drug pusher contrite? Was this “scientist” embarrassed or humbled to find out that he had been hornswoggled by Big Pharma into reviewing cooked books they called data? Nah: the drug pusher blamed the lawyers—but, for what? For putting into the public domain the information that proved his or her work worthless, and indeed harmful.

The best of it is when the snake oil salesman crowed: “Well, they didn’t pin it on me!” What a great legacy…

On Monday the BMJ published a new study that contradicts a 2001 Paxil “Study 329” proving that Paxil is neither safe nor effective for adolescents with depression. The original study manuscript was not written by any of the 22 named authors but by an outside medical writer hired by GSK. The paper’s lead author – Brown University’s chief of psychiatry, Martin Keller and his co-authors misrepresented data to make the antidepressant look safer and more effective than it really was. Peter Doshi, Associate Editor for The BMJ says the new paper “has reignited calls for retraction of the original study and put additional pressure on academic and professional institutions to publicly address the many allegations of wrongdoing.”