On the afternoon of April 24, 2014, a school bus driver, Gerald Rupple, was going about 50 miles per hour on Nohl Ranch Road when he reportedly lost consciousness, sending the bus off the road along a hillside. A eucalyptus tree and a lamppost were the only things keeping the school bus from overturning.

Rupple told investigators that he wasn’t feeling well and that the heat probably caused him to blackout. But according to the Orange County District Attorney’s Office, Rupple hid a medical condition from the Orange Unified School District that causes seizures, dizziness, and blackouts.

“I don’t think he intended harm on those kids,” said the Baum Hedlund attorney, who is representing two young girls who sustained injuries in the crash. “He made a terrible mistake because he desperately wanted a job.”

Baum Hedlund believes that Orange Unified School District (OUSD) should be held accountable for hiring Rupple. “They hired somebody who was covering up a medical condition. They were responsible for putting him behind the wheel.”

Rupple, who is no longer employed by OUSD, was arrested in January 2015 and charged with felony counts of child abuse and endangerment, as well as perjury by declaration and a sentencing enhancement for causing great bodily injury. He has entered a not guilty plea.

It was nearly nine months ago that Regina Singh found herself riding with her young daughter in an ambulance. At the time, she had no idea that her daughter – who just recently had her braces removed and was only a few months away from graduating from El Rancho Charter Middle School – would spend the next few months in a hospital recovering from serious spinal injuries and toe amputation.

On the afternoon of April 24, 2014, Mrs. Singh was told that the school bus carrying her daughter home from school had veered off of Nohl Ranch Road and crashed in Anaheim Hills. When she arrived at the scene, she saw the school bus teetering off a hillside. The only thing keeping it from toppling over was a eucalyptus tree and a lamppost.

A crowd had gathered as emergency responders worked to help students from the wreckage. Children were screaming. Someone handed Mrs. Singh a backpack. She was told that her daughter was pinned near the emergency exit of the school bus. She suffered major injuries in the crash, as did several other students. Some had broken bones, others had intracranial hemorrhaging. Students would later describe a chaotic scene in which their peers were thrown around like rag dolls, as the driverless bus flew off the road. 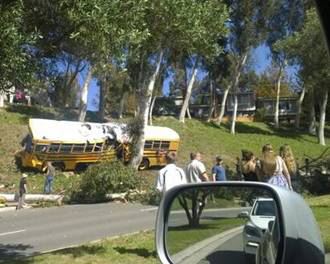 The bus driver, a 25-year-old man that students referred to as Mr. Jerry (Gerald D. Rupple), told authorities that the “the heat probably got to me,” causing him to pass out behind the wheel while the bus was going roughly 50 miles-per-hour. But according to numerous sources, Rupple failed to disclose a medical condition to the Orange Unified School District that causes him to have seizures, dizziness, and blackouts. According to the Orange County District Attorney’s office, Rupple withheld the condition because he felt disclosing it would jeopardize his employment.

On January 9, 2015, Rupple was arrested and charged with felony counts of child abuse and endangerment, perjury by declaration, and a sentencing enhancement for causing great bodily injury. If he is convicted, Rupple could face 19 years in prison.

As for Regina Singh, her husband, and her daughter, they are just trying to stay positive and move forward with their lives. “I’m not angry at anyone,” she said.