A Metrolink train derailed early in the morning on February 24, 2015, after a fiery collision with a truck on the tracks in Oxnard, California. Twenty-eight people aboard the Ventura County Line train bound for Los Angeles were taken to area hospitals following the 5:44 a.m. crash at Rice Avenue.

Every passenger on the Metrolink Oxnard train that crashed on February 24, 2015, has a legal claim and deserves the maximum compensation allowed. 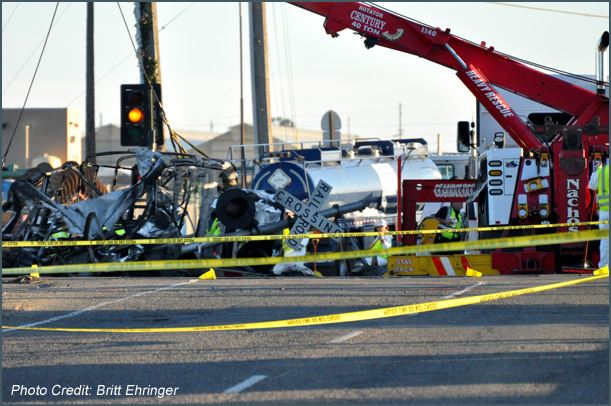 Authorities say the chain of events leading to the Metrolink crash started when a Ford F-450 truck hauling a trailer, took a wrong turn which put him right onto the tracks near the Rice Road crossing. Per a witness, the truck driver got out of the vehicle and fled on foot. The approaching train sliced the truck in half and caught fire. The truck driver was later detained and arrested by law enforcement.

NBC Los Angeles reported that the train was being pushed by a cab (rear) car locomotive at speeds less than 79 miles-per-hour (cruising speed) prior to the crash. After spotting the truck on the tracks, the conductor was able to deploy the train’s emergency brake system prior to impact, according to Oxnard Fire Department officials.

Four train cars derailed after impact. Aerial coverage of the crash showed three of the four cars strewn in several different directions, laying on their sides. Metrolink officials told the media that three of the cars that derailed were equipped with a “crash energy management” system designed to absorb and redistribute the force of a crash away from passengers. The fourth derailed car, the bicycle car, did not have the system.

Emergency responders arrived at the scene and immediately set up a triage area to treat victims. Injuries reported from the train crash vary, though officials say four people are in critical condition.

The National Transportation Safety Board (NTSB) issued a press release following the crash, stating that they have dispatched a Go-Team to Oxnard to begin an investigation. 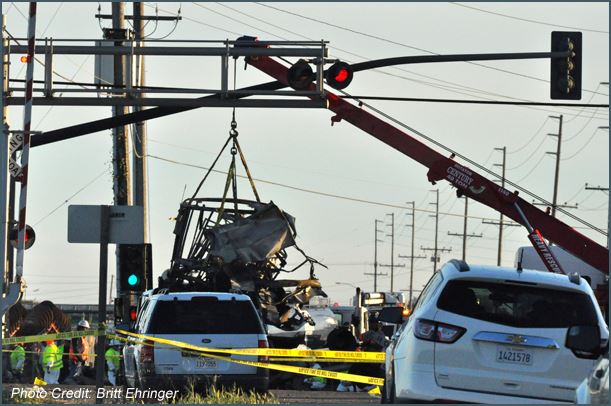 In the last 10 years, Metrolink has been involved in a number of major crashes. An eerily similar crash to today’s Oxnard crash happened in Glendale on January 26, 2005. A Metrolink train, also being pushed by a locomotive, collided with an abandoned Jeep Cherokee left on the tracks, causing the train to derail. Eleven people lost their lives in the crash and over 200 were injured, which sparked severe criticism from safety advocates who said the pushed train made the accident significantly worse.

In 2008, a Metrolink train collided head-on with a Union Pacific freight train in Chatsworth, killing 25 people and injuring 135 others. Investigators determined that the Metrolink engineer went through a red light signal while texting before the train entered a single-track.

According to the Federal Railroad Administration (FRA), there are 228,000 street-rail crossings scattered throughout the country, and roughly 140,000 of those crossings are on public roads. A little more than half of those crossings are equipped with active warning devices that use gates and/or lights to alert those nearby of an approaching train.

Spurred on by the passage of the Rail Safety Improvement Act of 2008, Metrolink also promised to install a $210 million Positive Train Control (PTC) system designed to prevent crashes caused by human error or natural disaster. PTC has been installed on three Metrolink routes and will likely be implemented to all other routes by the spring.

In a high stakes gamble, the high tech crash avoidance system was not set up on the Ventura County Line passage where the February 24, 2015 crash took place, even though it is one of the deadliest in Ventura.

An overpass planned more than 15 years ago, estimated to cost Ventura county between $30 and $35 million, has been delayed due to lack of funding. According to officials, this overpass would have prevented Tuesday’s tragic Metrolink crash. However, attorney Ron Goldman states, “A simple barrier, a sign or stanchion could prevent the premature turn – and that would take hours as opposed to years and cost a whole lot less than $30 million.”

As of Tuesday night when National Transportation Safety Board member Robert Sumwalt briefed the media, NTSB investigators still hadn’t spoken to the truck driver, Jose Alejandro Sanchez-Ramirez; but after spending 12 hours at the scene, Sumwalt felt it was appropriate to tell the media that the driver’s statement to police that his vehicle was stuck on the tracks was untrue. Sumwalt may later find that conclusion difficult to support.