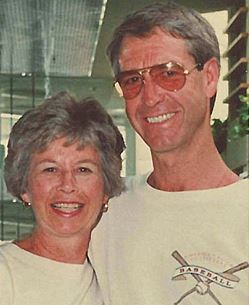 Jefferson County, Kentucky – A Virginia woman has filed a lawsuit (case no. 14CI04598) in Jefferson County Circuit Court of Kentucky for the wrongful death of her husband and for the injuries she sustained in a multiple-vehicle collision in 2013 on the I-64 near Shelbyville, Kentucky.

In the late morning of September 9, 2013, Charles Allen Burtt with his wife, Cleo Burtt, were driving on the westbound I-64 when a multiple vehicle collision occurred immediately in front of them. Mr. Burtt quickly pulled onto the left shoulder to avoid the collision. When he got out of his vehicle to determine whether assistance was needed by those involved, he was struck and killed, and his wife was injured by an approaching 18 wheeler owned by Commonwealth Express, LLC, based in Kentucky.

The inattentive Commonwealth truck driver swerved, lost control, hit a guardrail and jackknifed while attempting to avoid the collision ahead when he crashed into Mr. Burtt and into the Burtt vehicle with Cleo inside.

Commonwealth Express, LLC, its driver, David Russell, and Transfreight, LLC, of Kentucky the owner of the trailer attached to the tractor, are named as defendants in the lawsuit.

The parties involved in the first collision have also been named as defendants since their reckless behavior and negligence initiated the chain of events that ended in injuries sustained by Cleo Burtt and the death of Charles, her husband of 43 years. These defendants include Ozark Motor Lines, Inc., of Tennessee, and their truck driver Edwin Leon. Also named are P & P Transportation aka Piazza Produce, Inc., of Indiana, their driver Chris Moore, and Penske Truck Leasing., Co., LP, of Pennsylvania, owner/lessor of the Produce box van.

The lawsuit alleges the sequence of events began when the driver of the P & P Transportation / Penske box van pulled over onto the right shoulder of the interstate to read a text message and was positioned perilously close to highway traffic. The box van was struck by the Ozark truck when its driver failed to keep a proper lookout. The diesel fuel tank of the Ozark truck ruptured and spilled oil as the truck spun out of control and hit a BMW traveling in the far left lane, causing both vehicles to careen through the guardrail into the grassy median strip of the highway. Charles Burtt pulled over onto the left shoulder to avoid the accident occurring ahead that was spreading fuel and debris. Cleo remained in the car as Charles got out to see whether assistance was needed for those involved in the collision.

The complaint claims that except for the negligence of the parties involved in the first collision, the second accident would not have occurred. It alleges that the owners of the trucks involved were negligent in the training, hiring, and retention of the drivers and that the drivers themselves violated traffic laws that led to the accidents. Cara Luther, one of Ms. Burtt’s Baum Hedlund attorneys said, “Trucking companies owe an important and non-delegable duty to motorists and to the public to safely hire, train and constantly monitor their drivers. Until they fulfill this duty and important obligation, the lives of innocent loved ones will continue to be lost unnecessarily on our highways.”

Further, the lawsuit alleges that as a result of negligence and reckless behavior, both Cleo and Charles Burtt suffered emotional distress for fear of the safety of one another as the Commonwealth Express/Transfreight tractor-trailer lost control and careened towards them. Cleo also sustained loss of companionship of the love of her life and husband of 43 years. Charles, also known as “Charlie” by his family, was 71 years old when he was killed. As a testament to his character, his family received over 175 cards and expressions of sympathy from their friends and community.

The national law firm of Baum, Hedlund, Aristei, and Goldman represents Cleo Burtt and the estate of Charles Burtt for her injuries and for the loss of her husband. The firm has handled more than 8,000 personal injury and wrongful death cases across the nation, including over 200 truck accident cases. Local counsel on this case is Ben Carter Law, PLLC of Louisville, Kentucky.