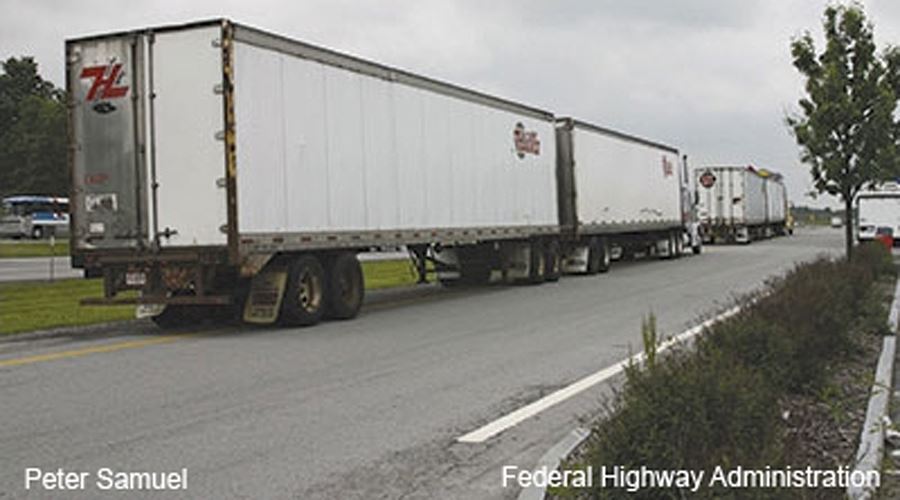 On April 10, 2014, a FedEx truck hauling a double trailer crossed over a grassy median on Interstate 5 near Orland, California and collided with a tour bus loaded with high school students on their way to visit Humboldt State University. Though authorities are still piecing together what caused the truck to cross over the median, the crash underscores some of the dangers associated with trucks hauling double trailers.

“It was a double-bedded FedEx ground truck. Both of the beds were askewed at some weird sort of angle. And it just hit us,” said 18-year-old Miles Hill, who was sitting right behind the driver of the tour bus when it was struck by the FedEx truck. What Hill saw is something that truck safety advocates have been talking about for years: a number of independent studies have shown that there are serious safety concerns associated with longer and heavier trucks on our highways.

Stability and control are at the heart of why double trailers can be dangerous. “Relatively small tractor steering movements (e.g., in a lane-changing maneuver) are magnified by the second trailer and can reach unmanageable levels, producing exaggerated sway and subsequent rollover of the rearmost trailer,” wrote the authors of a truck study that appeared in theAmerican Journal of Public Health. The study found that a key factor in double trailer crashes was how long the trucker had been behind the wheel. The likelihood of a crash increased with the number of hours a driver had been working, especially when a driver had worked more than six hours. According to the New York Times, the study also found that younger drivers posed more of a safety risk when hauling double trailers, and trucks hauling double trailers were even more likely to crash when the trailers were empty, likely due to greater stability problems.

Double trailers, or longer combination vehicles (LCVs) as they are often called, are likely to have accident involvement rates at least 11 percent higher than single tractor trailers, according to the Coalition Against Bigger Trucks (CABT). LCVs also create a larger crash footprint, due to their length and the potential for trailer separation. It is also worth noting that LCVs have unusually poor stability performance, as they are prone to rearward amplification, or a “crack the whip effect,” when control of the rig is lost.

On the day of the Orland crash, FedEx truck driver Tim Evans, 32, was returning to his home in Elk Grove after making a scheduled trip to Weed, California. The total trip is roughly 458 miles, which ends up being roughly seven hours behind the wheel even without including the slower times for entering and exiting the loading facilities and the time it takes to swap out trailers. At a minimum, at the time of the crash, Evans had likely been driving for well over five hours. According to the National Transportation Safety Board (NTSB), Evans was hauling two trailers at the time of the crash; the first trailer, nearest to the truck, was partially filled and the rear trailer was empty.

Witnesses to the crash say Evans’ truck was on fire before he crossed over the median into oncoming traffic, but that claim has not been substantiated by the NTSB. Another area of emphasis for accident investigators has centered on Evans’ truck not leaving any skid marks prior to impact. The media has speculated the possibility of brake failure, or that that Evans himself suffered some catastrophic health issue. As of now, the Orland tragedy has shown us that the dangers associated with longer trucks should be closely scrutinized to avoid this type of tragedy from happening again.