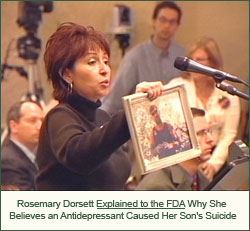 On March 26, 2010, a United States District Court Judge in Los Angeles rejected Eli Lilly and Company (“Lilly”) and Sandoz Inc.’s attempt to dismiss a case arising from the suicide of Noe Carrasco, a 26-year-old Southern Californian man who was taking the generic version of the antidepressant Prozac at the time of his suicide.  The lawsuit was brought by the young man’s mother, Rosemary Dorsett, who claims the manufacturers failed to warn of the suicide risks associated with fluoxetine (Prozac).

Both Lilly and Sandoz  moved to dismiss the case arguing that the FDA would not have allowed a warning concerning fluoxetine’s suicide risks.  Sandoz additionally argued that, as a generic manufacturer, it is not legally allowed to voluntarily revise its warning labels.  In a 30 page opinion, Judge A. Howard Matz of the U.S. District Court for the Central District of California rejected Lilly and Sandoz’s arguments.  The case is Dorsett v. Sandoz, Inc., Case No. CV 06-7821 (C.D.Cal., March 26, 2010).

The Court ruled, amongst other things:

Despite her own personal tragedy, Rosemary Dorsett has taken proactive steps to try to prevent others from having to endure the emotional pain she has been forced to suffer.  She traveled to Maryland for the December 13, 2006 Psychopharmacologic Drugs Advisory Committee meeting to testify about her son’s death and to urge the FDA to issue stronger warnings about the increased risk of suicidality associated with antidepressants, including fluoxetine.

Baum Hedlund attorney Bijan Esfandiari, who briefed and argued against preemption on behalf of Ms. Dorsett, stated of the Court’s ruling:

“The Court's well-reasoned decision confirms that both generic and name brand manufacturers have an ongoing responsibility to ensure their products remain safe and that they provide adequate warnings regarding life threatening risks. The Court's ruling further confirms that negligent and reckless manufacturers will no longer be allowed to seek blanket immunity from liability through the shield of preemption.  The decision is a victory for all consumers.”