The crash, which happened near the Northeast border between Washington and Maryland, is the deadliest incident suffered by Metrorail, Washington’s subway system, in its 33-year history.  The only previous fatal accident claimed three lives after a train derailed in 1982. 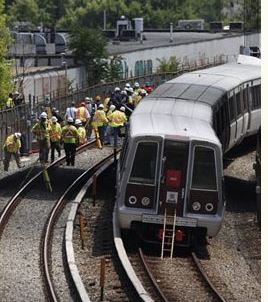 The deadly collision occurred when a moving train rear-ended another train on the same track ahead of it which was stopped and waiting to approach the Fort Totten station.  Both trains were headed to downtown Washington.  The force of the crash was so intense that the moving train was crushed and compressed to about one-third of its original length.

In the aftermath of the crash, emergency crews pulled apart the wreckage searching for additional victims as investigators looked for clues to help them determine a cause.

The probe, led by the National Transportation Safety Board (NTSB), focused on an automated computer system used by Metrorail which was supposed to prevent this type of accident.  Officials discovered that this signaling system, meant to detect stopped trains, experienced multiple failures in the days before the crash.  After testing the signaling system during the days after the crash, the NTSB found that it also intermittently failed during those tests, raising concerns of passing trains possibly having trouble receiving signals to stop or slow down.  The NTSB said that the system problems began occurring five days before the crash, when a piece of equipment was replaced on June 17.

The test results raised concerns about passing trains possibly having trouble receiving signals to stop or slow down.

On July 13, 2009, the NTSB issued two rare urgent safety recommendations to the WMATA and the Federal Transit Administration (FTA).  The recommendations called for enhanced safety redundancy of WMATA’s train control system.  Although the investigation into the crash is still not complete, the NTSB grew concerned that the train control system was susceptible to a single point failure since it failed to stop a train when the detection of a preceding train was lost.

NTSB member Debbie Hersman testified before congress and described the investigation into the deadly crash.  “Automatic train control systems are supposed to detect the presence of all trains at all times,” Hersman said, “but in the unfortunate event that the system fails, there should be a built-in safety redundancy, as a real-time alert, to prevent trains from hitting one another.”

WMATA Metro officials responded by saying it plans on the following recommendations as soon as possible. Officials added that as of now, no warning system exists.

“It is important to know that there are currently no systems available commercially that could provide the Metro system with the kind of alerts that the NTSB has recommended, and that such a system must be invented,” Metro officials said.

Since the crash, Metro trains have been manually controlled as a precaution against computer problems.

If the signaling system did indeed fail in the moments before the crash, the operator of the moving train, 42-year-old Jeanice McMillan, killed in the crash, would have been deprived of very critical information.  According to investigators, the moving train was on automatic mode as it sped towards the stopped train.  Although the moving train was mainly operated by a computer, investigators found evidence that McMillan had attempted to slow it down.  About 400 feet of markings were found on the rails that indicated some emergency braking took place moments before the train barreled into the rear of the other.

Investigators also turned their attention to the trains themselves.  The cars that made up the moving train, including the front cab, which was crushed and compressed by the impact, were some of the oldest in Metro’s fleet.  Back in 2006, the NTSB had strongly urged Metro to phase out the outdated train cars for many reasons, one of them being their tendency to crumple in a crash.  Officials had warned that the old fleet was dangerous if it was not replaced or retrofitted to withstand a crash.  The NTSB deemed it “unacceptable” that neither was done.

In the aftermath of this terrible tragedy, many are left wondering why the necessary changes were not made to save lives. The Metro system failed to follow previous NTSB recommendations because it did not allocate funds to do so.  The changes would have cost around a billion dollars that Metro does not have.

Metro officials had argued in the past that the federal government should contribute to the cost of replacements and maintenance since the system serves the capital and many passengers are federal workers.  Last year, Congress approved $1.5 billion in funds.  However, even with the money available to order new cars, Metro officials stated that the newer and safer equipment would probably not be on the tracks for another five years.

For many Metro riders, that is simply not good enough.  Metro workers are also outraged.  In the days following the crash, the union representing transit workers demanded that the current safety procedures be reformed to prevent another tragedy.  The union asked that the older, less stable cars be placed in the middle of trains instead of the front or back.  Also, the union believes that operators should have the choice to either use automatic mode or manual mode.  Workers also requested that Metro officials not mandate speeds at which trains traveled, warning that operators were being pushed to move at unsafe speeds.

A spokesman for Metro said the agency was looking into the union’s demands.