Baum Hedlund represented clients in wrongful death and personal injury claims from the 2008 Chatsworth Metrolink disaster in which 25 passengers were killed and 135 people were injured.

A Metrolink train carrying commuters home from downtown Los Angeles, collided with a Union Pacific freight train on September 12, 2008 in the late afternoon resulting in Southern California’s most deadly train accident. The collision occurred on a single railroad track at the northwest end of the San Fernando Valley in the city of Chatsworth. 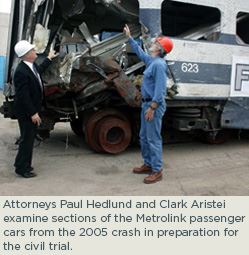 The engineer from the Metrolink train failed to stop for a red light which would have kept the commuter train off the same track as the freight train traveling towards them, Metrolink authorities admitted within less than 24 hours after the crash. The crash killed 25 passengers and injured 135, 40 critically.

The news that the Metrolink engineer, Robert M. Sanchez, employed by Veolia Transportation, was inappropriately reading and sending text messages minutes before the crash prompted the California Public Utilities Commission on September 18, 2008 to ban use of cell phones and other such devices by on-duty railroad engineers, brakemen, conductors, or rail transit vehicle operators except for personal communications that take place when the train is stopped.

After preliminary evidence released by the NTSB proved that Sanchez had sent a text message 22 seconds before the collision, the Federal Railroad Administration issued an emergency order on October 1, 2008 forbidding the use of cell phones and other personal electronic devices by railroad employees while operating trains. The NTSB also reported that throughout Sanchez’s two shifts on the day of the accident, he made and received text messages a total of 57 times.

Cell phone use and text messaging, a known source of distraction, should have been banned from the engineer’s cab years ago. But Metrolink waited until tragedy struck to do so.

This rail disaster also prompted U.S. legislators from California to introduce legislation that would require collision avoidance systems on all major U.S. rail lines. The House and Senate passed a version of that bill, known as the Railroad Safety Enhancement Act of 2008, on October 1, 2008 which the President signed into law on October 16, 2008. Technology that has existed for 30 years could have prevented this tragic accident. “Positive Train Control” has existed for decades. The National Transportation Safety Board (NTSB) began calling for sophisticated warning and control systems, like the PTC, about 30 years ago and has included Positive Train Control systems as one of its “most wanted” Transportation Safety Improvements since 1990.

Positive Train Control Systems have been urged on Metrolink since 1990. The pleas for safety have been ignored. Once again, only tragedy moves them to action.

The Chatsworth collision was so severe that the passenger car directly behind the train’s locomotive splintered as it slammed into the back of its engine, causing it to be pushed through the passenger car.

NTSB Railroad Accident two-dimensional animation displaying the
preaccident operations of the Metrolink passenger train and
the Union Pacific freight train, which collided head on in a curve
near Chatsworth, CA on September 12, 2008

Baum Hedlund has been retained to represent victims from the Metrolink Chatsworth collision. Personal injury and wrongful death cases are still pending from the 2005 Metrolink commuter train collision in Glendale, California, in which 11 people were killed and approximately 180 people were injured. The jury in the ensuing criminal trial recently convicted Juan Alvarez of 11 counts of murder for leaving his jeep on the tracks in the way of an oncoming commuter train, causing what was considered at the time, Metrolink’s worst crash in its history. Many civil lawsuits are still pending against Metrolink for its role in causing those injuries and deaths.

The train accident attorneys from Baum Hedlund Aristei & Goldman represent 16 families from the 2005 Metrolink tragedy, including families of three people killed in that collision and 13 passengers injured. Their lawsuits claim that Metrolink’s unsafe procedures, including the pushing of passenger train cars, the first of which is often called the “coffin car”, led to the tragic consequences in that case. 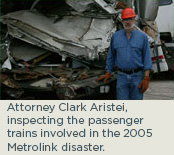 J. Clark Aristei, Baum Hedlund senior shareholder, is the appointed Plaintiffs’ Liaison Counsel for the Plaintiffs’ Steering Committee overseeing the one hundred or so consolidated cases in the 2005 Glendale Metrolink tragedy. Those cases are scheduled for trial in the summer of 2009.

Mass disaster lawyers from Baum, Hedlund are very familiar with the aftermath of train accidents and the personal injury and wrongful death litigation that follows after these train tragedies. The firm has over 25 years of experience investigating these crashes and representing train accident victims. 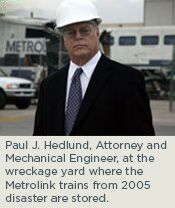 Mechanical engineer and attorney, Paul J. Hedlund, also a senior shareholder at the Baum Hedlund firm, has also worked on many of the firm’s train disaster cases. He also testified after the 2005 Metrolink crash before the California State Assembly hearing on California commuter rail safety as a result of the Metrolink derailment. Mr. Hedlund presented evidence of the dangers of pushed trains and other safety measures that could have been taken to lessen train injuries. Several of the firm’s clients and victims from the 2005 Metrolink tragedy also testified.

Several of the most injured Baum Hedlund clients, and a very outspoken widow, whose husband was killed in the 2005 Metrolink crash, and the firm’s Public Relations Director, flew to Sacramento together when the push vs pull passenger train Assembly bill was up for a vote before the State Senate. On the day before the vote, these clients urged 12 different Senators to vote “yes” on the bill and then they next day they each testified at the final Senate Transportation and Housing Committee hearing on the bill.

Anyone seeking legal representation should Contact the train disaster attorneys at Baum Hedlund Aristei & Goldman, or call 800-827-0087 or 310-207-3233 for a free consultation.

Baum Hedlund Aristei & Goldman has handled many of the major train crash accidents that have occurred throughout the United States over the past 25 years and have represented victims in train derailments, train collisions, train accidents at-grade-crossings, FELA-railroad employee injury claims, and incidents involving Amtrak, Conrail, MARC and Metrolink.